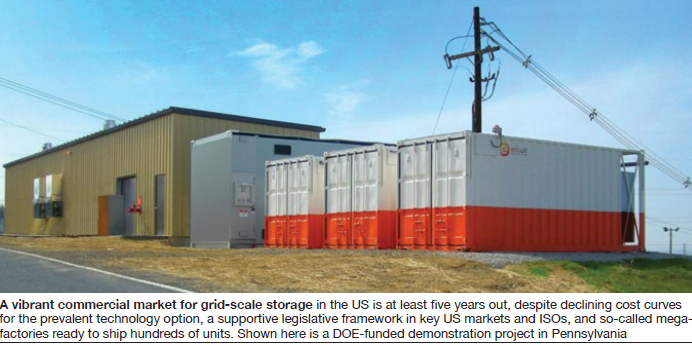 Editor’s Note: The status report below draws broad insight from a consultant’s engagement with high-level representatives from countries interested in US grid-scale storage technologies, regulations, and applications—including attendance at the Energy Storage Association’s 2016 Conference in Charlotte, NC, April 25-28, plus meetings with US storage system suppliers, California utilities, CAISO, and other stakeholders.

What is clear from being immersed in the grid-scale storage space (here not addressing behind-the-meter storage) for 10 days is that state and federal regulators in key states and regions, along with the respective organized-market independent system operators (ISOs) and regional transmission organizations (RTOs), have laid the foundation for grid-scale storage to compete against traditional options for supplying grid services. In California, there is more than a foundation; there is a mandate for a modest amount of storage capacity to be procured as well as multiple pieces of legislation supporting grid-scale storage.

The importance of this regulatory framework in the electric-power industry should never be under-estimated.

Unfortunately, the viability of storage options—whether technical, commercial, economic, lifecycle, safety, and reliability, or otherwise—is still being called into question by the utilities charged with integrating storage into the grid. And the market for new grid assets, in general, is questionable in the near term given persistent and historically low electricity demand in most regions and lackluster economic growth.

Bottom line: Storage still lacks replicable, compelling payback-driven applications to attract either private or regulated-rate-of-return financing. The goal, after all, isn’t a market the size of one or two typical combined-cycle plants annually, which is what the total market size is today. This, despite the fact that cost for the prevailing technology, the variety of batteries classified as lithium-ion, keeps plummeting and, according to one report, only 40% of the world’s manufacturing capacity is currently being utilized.

One California utility specialist conceded that, if not for the mandate, there are less expensive ways to provide the same services. Another utility in the state, involved in multiple distributed and bulk-storage pilot, demonstration, and assessment projects, reported that storage “is not expected to be an attractive commercial investment until the 2025-2030 time frame.” Yet the mandate requires the state’s three investor-owned utilities (IOUs) to install over 1300 MW of storage by 2020.

If that’s the sentiment in what everyone agrees is the most attractive state for grid-scale storage, system suppliers which have invested in hundreds of thousands of square feet of manufacturing space may be sitting with idle assembly lines for years to come, unless behind-the-meter installations dominate in the near-term.

Leaders of a pre-conference workshop at this year’s Energy Storage Association (ESA) meeting identified and elaborated on the multiple value streams available for developers to monetize a storage asset. FERC has weighed in positively through several rulemakings to support use of storage for a variety of ancillary services among the ISOs and RTOs.

Congressional legislation now allows storage paired with solar to qualify for a generous investment tax credit (ITC). That should have been music in the ears of the prominent solar developers who started pursuing storage with gusto a few years ago, except several of them are facing insolvency and corporate restructuring.

NYISO and ISO New England Inc both have created means for storage participation. Hawaii wants fully dispatchable solar (accomplished by pairing solar with storage) to displace diesel generation. Oregon has also passed legislation requiring utilities in the state to begin procuring initial storage capacity by 2020; New York may not be far behind.

The seminal challenge is that, beyond the mandates, none of these value streams typically can support a storage asset investment. Even “stacking” multiple value streams rarely vaults the threshold for financial viability.

Broad technical challenges still loom, at least from the owner/operator perspective. System integration is one. Control and communications systems are another. One R&D-oriented stakeholder noted that control systems are “a focus of industry efforts today.” An OEM, which supplies everything to a storage system but the battery, stated that inverter technology must be optimized. “All inverters respond differently to the grid,” a company specialist said, “and the more inverters there are, the greater chance that they will interfere with each other.”

Safety and lifecycle issues are paramount with owner/operators. One utility representative reported that the availability of the storage system (including power electronics, telecommunications devices, wireless communications, etc) for an all-solar home demonstration program was “abysmal.” That’s not a word you hear very often in public-utility presentations on technology.

Another utility hired an independent consulting company to evaluate safety issues for each storage system “offer.” Apparently, in California, the CPUC has no authority over a third-party storage provider. Thus, it falls on the utility to make sure a storage asset doesn’t take out the grid, or a large chunk of it, or a neighborhood.

One grid-scale storage specialist points to two landmark projects which could accelerate the pace towards a viable commercial market: a 100-MW (400-MWh) battery project in Southern California serving as the equivalent of a peaking gas-turbine unit, and a 52-MWh project in Hawaii serving as “fully dispatchable solar power.” Success would demonstrate technical and financial viability in two well-recognized use cases. However, the peaker displacement project is not scheduled to be online for another five years. The dispatchable solar project could be online much sooner. 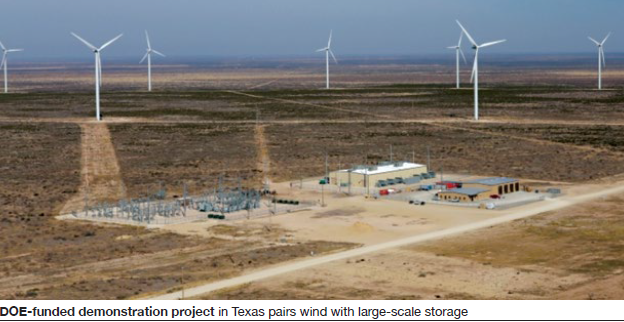 Other trends present opportunities. For example, in California, the energy portion of the average utility bill is declining or stable, but demand charges are rising. This presents an opportunity for storage to shave peaks and reduce demand charges. One company’s business model is designed around reducing demand charges using storage and automated load shedding at the site, and sharing the savings with the customer.

The recently passed Assembly Bill (AB) 327 has removed legacy ratemaking rules resulting from the California energy crisis of 2000-2001, and has rationalized rules pertaining to net metering, renewable incentives, and who pays and how much to maintain the grid for all ratepayers. AB327 also requires the state’s utilities to develop and submit plans for developing distributed energy resources—including storage.

Although it is not clear who ultimately wins or loses as AB327 is implemented, what is clear is that the state is driving a distributed-energy paradigm over the traditional centralized “big-iron and long wires” approach of the last century.

Here’s another dichotomy: The state’s utilities repeatedly find that bulk energy storage, pumped hydroelectric (PHS), and compressed-air energy storage (CAES), are economically viable but the “push,” as one director called it, is towards small distributed-energy systems and the “deployment of new technologies.” Nevertheless, this utility expects a move to a bulk storage project within five years, although it could be CAES, PHS, or a large flow battery.

Utilities in the vanguard of storage deployments and investment hail the present as the time to “try” new technologies. Utilities use words like “learning,” “understanding,” “long-term,” and “strategic investment” when describing their programs and investments in energy storage. Suppliers, on the other hand, need to feed the beasts of their mega-factories now.

While California’s AB2514 legislation (the “storage mandate” bill) requires IOUs to procure 2% of their peak load as storage (1% for the municipals and irrigation districts), there are caveats in the bill regarding cost-effectiveness. One might interpret this as a potential “off-ramp” for utilities. But it’s not that easy, noted one utility spokesperson.

The California Public Utility Commission (CPUC) is obligated to conduct an independent evaluation of cost and benefits as a “second opinion” and reportedly can impose penalties on the utility depending on what they conclude. Also, if other utilities find a technology economic, then the case for the utility which concluded the opposite is weakened.

Those sitting on vast manufacturing capacity, most of them lithium-ion battery suppliers, may have another challenge when the market finally hits that mythical knee in the curve: competition from other technologies. Advanced flywheels, a plethora of flow-battery chemistry systems, better lithium-ion options, advanced lead-acid batteries, and systems which combine batteries and ultra-capacitors are all on the cusp of breaking through the demonstration phase and into commercial applications.

Finally, if a commercial grid-scale storage market is struggling to emerge in the US, then it is embryonic in most other parts of the world, with the exception of Europe, China, and other developed countries like Japan, Korea, and South Africa. Countries like Brazil, Jordan, India, and others with ambitious renewable capacity additions are just now getting acquainted with grid-scale storage.

It might be surprising to learn, for example, that a major utility in India is targeting one-third of its generation to be renewable energy based within a decade or so. The country in general faces a 2% deficit in energy and 3% deficit between peak demand and capacity. Jordan seeks 10% of its electricity to be supplied by renewable resources by 2020.

Significant wind capacity is being added in Brazil, where in the northern part of the country wind capacity factors can be between 50% and 70%. Unfortunately, the population centers are to the south where, according to a spokesperson, the wind characteristics are “completely different.” This creates a potential need for massive amounts of storage, the spokesperson indicating that the logical option would be at least 2000 MW of PHS.

In sum, let’s just say, in the US anyway, there are “seams issues” among the owner/operators who have modest expectations and needs at best for the next five years, regulators and ISO officials who have diligently legislated the grid-scale storage opportunity over the last 10 years, and suppliers which have built out manufacturing capacity for orders they needed yesterday. GRiD