John Chaya, operations manager at Cogentrix’ Rock Springs (Maryland), reports that the installation by Turbine Controls & Excitation Group Inc (TC&E), Denver, Colo, went “as expected,” testing proceeded with only the normal number of “bugs” to sort out, and all machine starts since Nov 8, 2019 have been successful. All acceleration and ramp rates were matched to the original OEM specifications.

All four 7F peakers at Rock Springs (commercial in 2003) will soon be served by two DFE LCIs, with the second unit install to occur this year.

Chaya notes that the motivation for the retrofit was that the majority of unit unavailability was attributed to the LCI. The precipitating event occurred in October 2017 when two units were out of service for 12 hours. Obtaining spare parts was becoming an issue as well. The units experienced 120 starts in 2019, mostly in the summer.

“The TC&E/TMEIC team was very professional and did the work in the time frame promised,” The timeline was three days for component changeout, two days for testing and commissioning during the 2019 fall outage.

Other benefits attributed to the project by Chaya: startup procedures remained the same and the electronics and interface screens are much larger and easier to read (Figs 1 and 2). One piece of advice he offers the next users: Be sure to request training for troubleshooting, even though “it’s pretty intuitive to get through the manuals.” 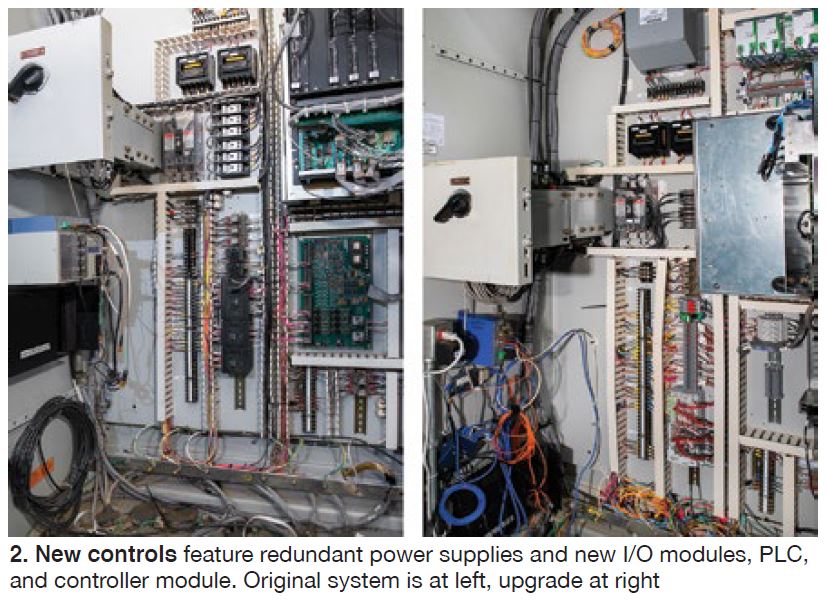 In what GE claims to be the largest gas turbine black-started by a modern battery, Entergy Louisiana has added a 7.4-MWh lithium-ion (nickel-magnesium-cobalt chemistry) unit at its Perryville power station to restart a 2001-vintage, 150-MW 7F.03 peaking gas turbine/generator should grid power be lost.

To re-energize the grid, black starts typically require separate gas or diesel generators to first start the larger generator. When you avoid a diesel generator, you also avoid other complications, especially the liquid fuel storage and delivery system. Also, black start assets typically are tested more than they are called upon to operate.

The 11-month project reflects several current trends. First is the growing and diverse grid-scale applications for large batteries, primarily lithium-ion. Second is the “hybrid” concept of pairing them with traditional generation and T&D assets. Many storage system engineers consider black start to be the most difficult grid-scale battery application.

According to GE specialists, the storage unit includes a grid-forming inverter, whereas most storage (and solar) assets employ grid-following inverters. The grid-forming inverter essentially creates a voltage source reference point the turbine can synchronize to. In other words, the inverter can operate in stand-alone mode, as its own grid.

“The voltage source inverter control is specifically designed to coordinate with the GT controls, in this case the familiar Mark VIe,” said Troy Miller, head of sales for GE Energy Storage, a subset of GE Renewable Energy Hybrids.

The battery system consists of three 40-ft shipping containers with 21,400 battery cells connected to a series of controls to convert DC power to AC.

Entergy Louisiana declined to comment for this article, but was quoted in the GE press release on the project as follows: “This is an innovative use of battery technology that provides another tool to buttress the overall reliability and resiliency of our system.”

The utility’s 2019 Integrated Resource Plan noted that energy storage, particularly in the case of battery-enabled storage, provides a range of attributes including: The ability to store energy for later commitment and dispatch, ability to discharge in milliseconds and fast ramping capability, rapid construction (on the order of months), modular deployment, portability and capability to be redeployed in different areas, small footprint (allowing for flexible siting), and low round-trip losses compared to other storage technologies (such as compressed air). The IRP made no mention of the Perryville project. CCJ