The issue of greatest concern among owner/operators at the 2018 501F Users Group conference was the rotor. Specifically, the more than a half-dozen forced outages across the fleet caused by vibration events traced to through-cracks in their torque tubes, which were concealed by the air separator. Recall that the torque tube joins the compressor and turbine sections of the 501F rotor.

There is no identifiable operational footprint as to the cause of these cracks yet: some units in baseload service, others cycling, another with high turning-gear hours. The wide dispersion of hours and starts for the affected units is a major factor as to why it caused such a stir.

What is known is that the propagation of such cracks is slow followed by rapidly progressing high-cycle fatigue and failure. Early crack detection would allow for outage planning and parts acquisition before a vibration event. Inspection, however, requires de-stack (Fig 1) to access the affected zone, which is usually under the air sleeve. As of yet, there is no tried-and-true way to thoroughly inspect for cracks in-situ.

With options limited for predictive and preventive maintenance and the risk of revenue loss from a forced outage, one baseload W501FC plant decided to take a proactive approach and replace both the torque tube and air separator during a major maintenance interval. The fear of a 12-month or more lead time in an emergent situation facilitated this decision.

With a tight schedule and a long list of action items in hand, the plant realized it needed a vendor with the expertise and resources to pull it off. Doosan Turbomachinery Services (DTS), La Porte, Tex, was selected to undertake this challenging assignment.

The scope of work included: 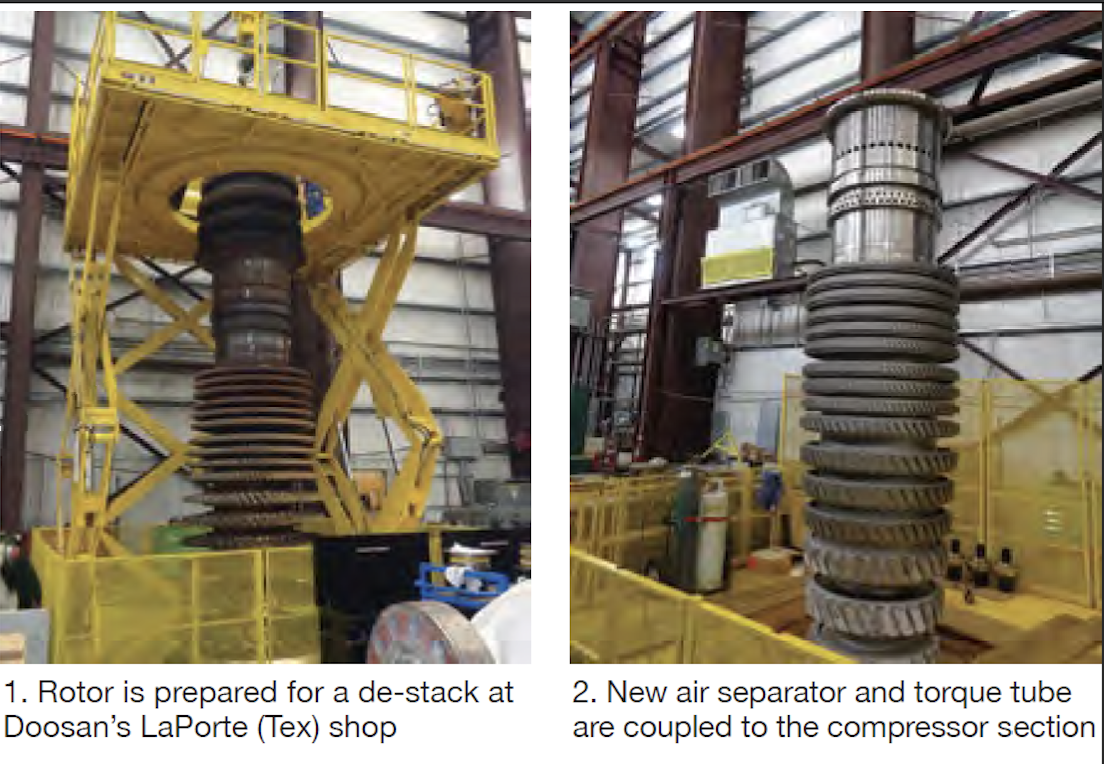 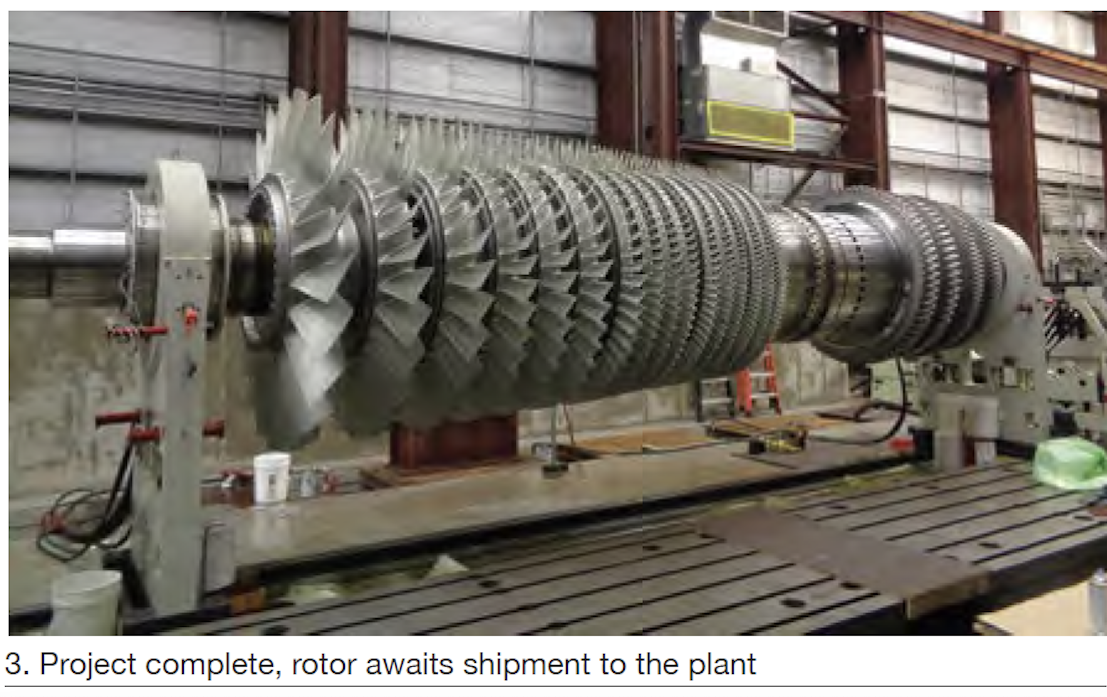 Component manufacturing. Immediately after de-stack at the DTS shop, reverse engineering began because component manufacturing was time-critical for delivery. White-light 3D scanning and metallurgical analysis of the existing torque tube and air separator started the process.

Doosan Heavy Industries, the parent company of DTS, had a turbine forging in Korea that matched the material composition; the forging properties were confirmed and rough machining commenced shortly after receipt of the rotor. A team of DHI engineers was sent to Houston to assist in the completion of the reverse engineering and characterization.

In the final stages of the project, DTS sent the 16th-stage compressor disk and the curvic adapter to DHI in Korea. The disk was properly matched to the torque-tube pins, the curvic adapter was mated, and the components were returned to La Porte for reassembly (Fig 2). Despite the added logistics, the project remained on schedule with enhanced repair integrity.

Lifetime extension. The 501FC rotor had 115k hours of run time when it entered the shop. A few years before this outage, the site had decided to forego the recommended Class 2B rotor inspection at 96k hours. Thus, this was the first major for the unit.

The Class 3 rotor lifetime extension was performed in conjunction with a well-known major industry partner, and inspection scope consisted of eddy-current and ultrasonic testing in critical areas and components. Luckily there were no significant findings and it was determined based on the inspection results that there were no known limiting factors that would be cause for concern with an additional two major run intervals.

Also, during the rotor’s 69 days in the shop, DTS reverse engineered and manufactured three full rows of compressor blades for replacement, along with combustion hardware and diaphragms (Fig 3).

The components at the core of the project, namely the original torque tube and air separator, were found to have no damage. These parts were refurbished and returned to the customer as emergency spares for its fleet. Total outage duration was 100 days.