If country music stars sang about powerplants, the Victoria Power Station, Victoria, Tex, might be a good choice. It’s a story about ordinary people doing heroic things in the face of constant adversity. With new owner Rockland Capital ready to invest in another turnaround, a period of stability may be near.

Imagine a gray market (though never operated) gas turbine/generator and HRSG landing in a 1950s-vintage central station and then proceeding through several equity owners and third-party operators over the next 10 years. Meanwhile, the Electric Reliability Council of Texas (Ercot) market is changing radically as a result of burgeoning wind power coming on the system.

Central Power & Light Co, a utility since acquired by American Electric Power, was owner and operator of the gas- and oil-fired facility when commissioned in the 1950s with two small steam turbines (by today’s standards)—a 240-MW Westinghouse machine and a 160-MW GE D5 turbine/generator (Fig 1). The plant was mothballed in the 1980s, ran some in the 1990s, and was shut down permanently in 2002.

In 2006, the plant was purchased by an independent power producer which soon was acquired by another IPP—one affiliated with a gas supplier. The intention was to repower the D5 steamer with a gas turbine and heat-recovery steam generator (HRSG, Fig 2). The owners purchased a gray-market Mitsubishi 501F machine and had it cleaned up at the OEM’s shop in Florida. Bibb Engineers was the engineering firm of record. At the same time, the steamer was taken apart and “refurbished,” but, according to Jeff Martin, plant manager, “not much needed to be done to it.”

“Everything is a custom job in a plant like this, a huge science project,” Martin said. All the legacy equipment was inspected, removed, and sent to shops in Corpus Christi—even the original 5-kV switchgear and river-water pumps, “all at low dollar.”

Original controls were gutted and a hybrid control scheme with Wood Group (now EthosEnergy Group) turbine control logic and Yokogawa DCS components added to automate the legacy steam turbine. The original feedwater-heater extractions had to be blanked off and steam bypass valves added for startup and shutdown.

Mitsubishi’s NetMation controls the GT, but the plant’s DCS was supplied by Yokogawa. Integration was handled by Wood Group. Natural gas is purchased from Kinder Morgan off of a Tejas pipeline. Although there are several other pipeline options in the immediate vicinity (this is Texas after all) the pressure is low and the plant would have to pay for a compressor booster station.

GT first fire and steam blows were conducted in late 2008. “We had lots of unit trips in the 2009-2010 timeframe, while learning about the reconfigured equipment,” Martin noted. “Our ops team learned from the Mitsubishi folks how to operate the unit, although there was a bit of a language barrier to work through.” Problems with the dynamic characteristics of the GT were resolved. Perhaps surprisingly to some, the combined cycle (CC) met all of its performance specifications.

Originally, the plant operated primarily in the summer (Victoria is southwest of Houston towards Corpus Christi), and then under a tolling agreement in 2012. “We survived the big freeze of 2011, but not without incident,” Martin noted, “we discovered our heat tracing and insulation systems were lacking, two of our triple-redundant transmitters on the HRSG drum level (the two exposed to the north) froze up.” But the ones on the south side worked. The plant wrapped transmitters to keep them warm, and used heat lamps and wind breaks to keep other critical devices from freezing. “We were online within one hour of our scheduled dispatch time,” Martin said.

Victoria Power’s location in the Ercot South market made its capacity critical. Two 138-kV buses are connected from the plant’s substation, as well as several 69-kV lines (Fig 3). During the unprecedented freeze, “We thought of ourselves as the ‘little engine that could,’” Martin added. 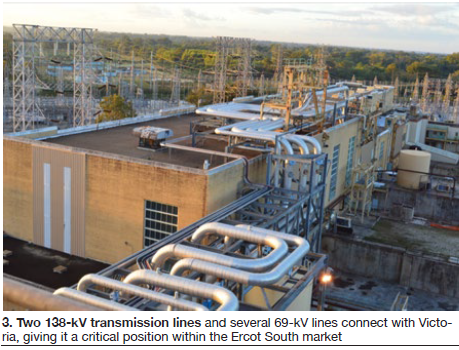 In 2013, the plant began independently bidding into the day-ahead market, and attained a 38.4% capacity factor with 144 GT starts and 3600 GT operating hours. Rated summer capacity was 290 MW, 305 in winter, at a heat rate of just under 8000 Btu/kWh. Keep in mind that 50 MW of that output requires duct-burner firing.

Late in 2012 the unit came down on forced outage, and one day after getting back online, one of the old 138-kV insulators failed on the bus. That kept the plant down for a while.

In 2013, with the Ercot wind power coming on strong, Victoria achieved 200 starts as a merchant plant. “We cycled on and off almost every day in the peak seasons,” Martin said. Post-2013, low energy margins in the Ercot market made operating as a merchant plant less than profitable. As a result outages were pushed out, and maintenance deferred, restricted to essentials only. The plant went up for sale in 2015.

Rockland Capital’s purchase of the plant from the banks holding the debt was finalized Jun 1, 2016. It was last dispatched on May 17 because of equipment issues, so it was coincidental that the unit was in an outage at the time of purchase.

A high differential pressure across the GT inlet air filters and high vibration (6 mils) in the low-pressure (l-p) section of the steam turbine had to be addressed. “The steamer had been whisper quiet after a major outage in 2014 up through late spring 2016,” Martin noted. The apparent cause of the vibration: Liberation of erosion shields from the blades in the final l-p stages.

According to Keith Feemster, Rockland’s owner representative for the site, “With the peak money-making season approaching, the new owners quickly got the staffing up from 13 to 18 people, paid the lingering invoices, met with local contractors and the chamber of commerce, and added a summer-run incentive bonus. The last included a metric for getting the current outage done date-certain—full-bore reputation management, in other words.

One forward priority is to make the plant more responsive; startup times have to be improved, Feemster said. “When the steam turbine is hot, we can get to full load in two hours and fifteen minutes. However, a cold start takes much longer, because the plant is following the old GE starting and loading charts. The GT also requires a “spin cool” procedure on shutdown to avoid uneven cooling.

“We’re looking at our options to keep heat in the machine,” Feemster continued, “and other flexibility options.” For one, the GT stack damper was never commissioned. “We plan to put that into service,” Feemster added. The previous owners obtained a permit to add a second CC unit, but this expansion project is on hold for now. The duct burners also provide flexibility and another option under review is a couple of PowerPhase units (CCJ, 2Q/2014, p 20).

The plant also is investigating operating schemes which will achieve a lower sustainable capacity—such as 80% of full load— in start times (hot) of less than an hour. In other words, sacrifice megawatts for responsiveness to dispatch. “We’re hoping to have this in place for the summer 2018 peak season,” Feemster said.

Improving reliability is another priority (Fig 4). “Switchgear, cooling tower, and circulating-water pumps, all need overhauls. Plus we have to meet the reliability standards required by Texas authorities; pass an environmental, health, and safety (EHS) audit; and implement a final solution for the steam-turbine vibration.” Obviously, there’s much on the plate as some of the equipment, like the generator step-up transformer (GSU) and lube-oil coolers, are close to 60 years old. 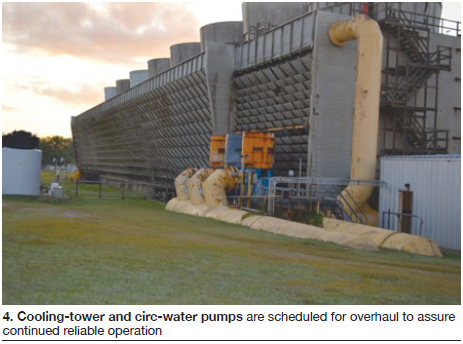 The plant has an LTSA with PSM for the GT. Although the maintenance schedule is similar to a 7F, Mitsubishi still requires the combustion inspection interval of 12,000 hours (GE has done away with the CI, now goes from hot gas path to HGP). “We’ve not had a significant failure event with our GT,” Martin stated, although several major components are now PSM replacements, such as Rows 1 and 2 blades and vanes, transition pieces, and combustor baskets.” Martin expects longer life from these upgraded components.

The steam-turbine outage in 2014/early 2015 was significant. Given that the machine had not undergone a major overhaul since 1985, “it was in really good shape,” Martin noted, although it apparently hadn’t run much between 1985 and 2002. Overall, the unit has undergone 700+ starts since the repowering project was commissioned.

One best practice with such legacy equipment: Be responsive to problems. “Anything that appears small, such as a leak, has to be addressed immediately,” Martin said. The plant has no predictive maintenance expertise on staff, such as vibration analysts or thermography specialists. “We rely on contractual services for predictive maintenance,” Martin concluded, “and we rely on our employees who know the equipment intimately.” GRiD