Sticking to a site map

Challenge. In the 17 years prior to implementation of its Confined Space Map, Dogwood had several occasions where a lock-out/tag-out (LOTO) involving a confined space was cleared, but remained open. After an HRSG door was left open following an outage, the plant started looking into ways to eliminate the potential for a recurrence, having to track over 150 confined spaces at the plant.

Solution. CRO Michael Davis, a member of the Safety Committee, had advocated for a visual way to account for confined-space status in the control room. After reviewing different ways to track confined spaces, he noticed that most of the solutions relied on technology that increased both cost as well as the CRO’s workload. He focused on finding a low-risk, low-cost, low-technology, high-results outcome.

His idea was to create a site map showing the major equipment and some of the underground systems on a white magnetic board that included all the plant’s confined spaces. This map would be installed in the control room above the LOTO cabinet.

Davis worked with NAES drafting to develop a simplified site plan for the plant. In addition to the major equipment and underground information, the 45 × 45-in. map also includes the following:

The map also provides a visual representation of the plant to facilitate discussions among plant personnel and contractors, and to show evacuation routes and muster points, and all door swings.

Results. The Confined Space Map has been in use for more than a year. Dogwood personnel believe it has resolved the issue of leaving confined spaces open when they should be closed. In addition, the site map has provided the plant a good visual for discussions with contractors by identifying the locations of equipment and various underground manhole connections and safety showers. This is a safety and awareness win for the employees and contractors.

Working safely on the package roof

Challenge. O&M personnel have a routine need to perform maintenance and inspections on BOP equipment located above the gas-turbine mechanical package. Access to this equipment required personnel to either climb an extension ladder or climb over railing from the GT access platform. Once on the roof, fall protection was required for the duration of work, restricting mobility. When multiple individuals were working on the roof at the same time, fall protection was more complex.

Solution. Dogwood worked with local firms to design and install an access point and handrail system to allow personnel to work on top of the mechanical package without the need for fall protection all the time (Fig 3). 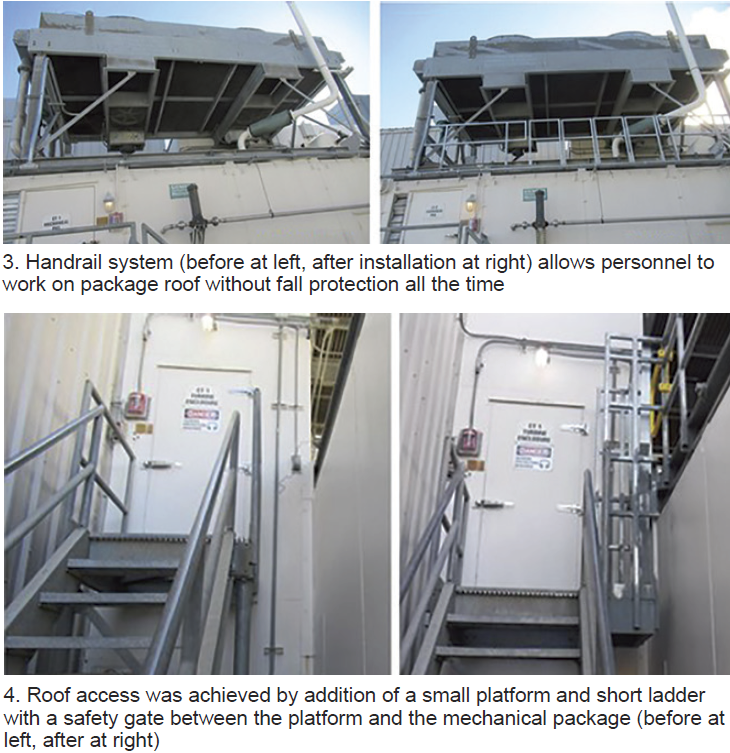 The most difficult part of the project was determining the best way to allow forklift access to the roof to transfer equipment while still providing a system to minimize the need of fall protection when working on the mechanical-package roof. While Dogwood would have preferred a prefabricated swing gate for forklift access, a custom design was required to accommodate the plant’s configuration.

When removal of large equipment is required, personnel don their fall protection PPE and tie off before removing sections of the front handrail to allow access. Sleeves were installed on the mechanical package roof to allow for storage of the removed handrail sections during these evolutions. Safety signs were added to each handrail system reminding personnel that fall protection PPE is required when the handrail system is removed.

Results. Dogwood completed installation of the hardware on both GT mechanical packages in December 2019. Personnel performing work on top of the packages now have safe access to the roof and a handrail system to eliminate the need for fall protection during most work.

By eliminating the need for fall protection during most work, personnel have better mobility and more unrestricted access to the equipment located on top of the mechanical package and do not need to worry about tripping over fall protection lanyards.