Identify and track deterioration of a failing transformer

Magna Electric Corp installed and commissioned in April 2012 a 4.12/7.5-kV, 3-phase, 11.2-MVA transformer for a manufacturing plant with a load of about 10 MVA (Sidebar). Following company procedures, technicians drew oil samples and ran dissolved gas analyses (DGA) before the transformer was energized and about one week after it was energized. Normally, they would have conducted another series of tests about three months later. But, in this case, the early DGA tests indicated a potential problem and testing was done more frequently.

During the transformer’s first month in service, the hydrogen level in its insulating oil rose from 4 to 115 ppm, methane from 1 to 7 ppm. Since these gases are associated with partial discharge activity, a PD test was conducted but nothing significant was found. By May, DGA results for hydrogen were outside of the acceptable range (100 ppm is the recommended limit) and the levels of both hydrogen and methane continued to rise. By September 2012, the hydrogen level was 2781 ppm, methane 145 ppm (above the recommended limit of 120 ppm).

Clearly, something was very wrong. Further analysis, including use of the Duval Triangle, indicated a low-energy fault. Methane, ethylene, and acetylene concentrations found in transformer oil are plotted on the triangular Duval chart, which is subdivided into fault zones. The zone in which the point falls indicates the likely fault type producing that combination of gas concentrations.

The transformer remained in operation based on customer need, but contingency plans were put in place for potential failure. The transformer manufacturer was involved in this effort because the unit was still under warranty. On Nov 2, 2012, a cable on the low side of the transformer faulted inside the connection box, taking the unit out of service.

Technicians conducted Doble power factor, leakage reactance, turn ratio, and DC resistance tests, finding all within acceptable limits. Another DGA was performed and there was no significant rise in gases after the fault.

However, the test results for excitation and sweep frequency response analysis (SFRA) identified discrepancies between the phases—particularly during the high- and low-voltage (HV/LV) open-circuit tests. The excitation test, for example, showed an increase of more than 4000% in the H2-H3 current compared to the previous tests. The SFRA tests confirmed that the problem did not originate from the high-side windings.

Magna Electric (now Shermco Industries Canada Inc) and the manufacturer agreed that the transformer should be returned to the latter for further investigation. A replacement transformer was installed at the user’s facility within a week, allowing that plant to return to service.

When the transformer arrived at the factory, it was energized at rated voltage with no load. Minutes later the transformer tripped out. When technicians lifted the lid of the access port, smoke poured out: The unit had failed (Fig 1). 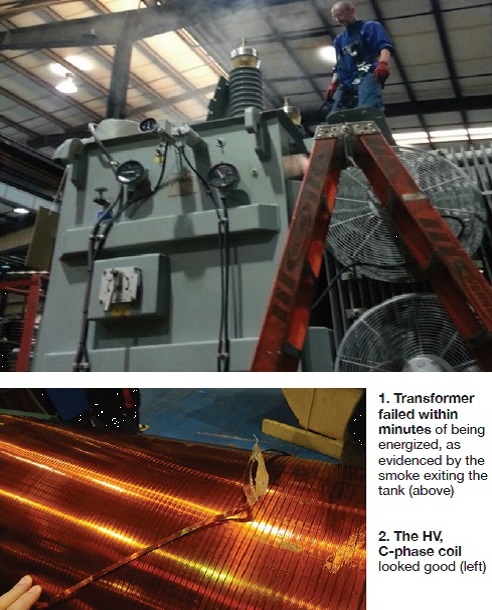 The transformer was disassembled and the C-phase coils were removed for examination. The outside, high-voltage, coil looked fine (Fig 2). Next, the HV coil was unwound to reveal the cardboard and copper shielding between the HV and LV coils. They also looked fine (Fig 3). The outside coils of the LV coil looked good (Fig 4), but as the uncoiling process continued, damage was visible in the third and fourth layers (Figs 5, 6). 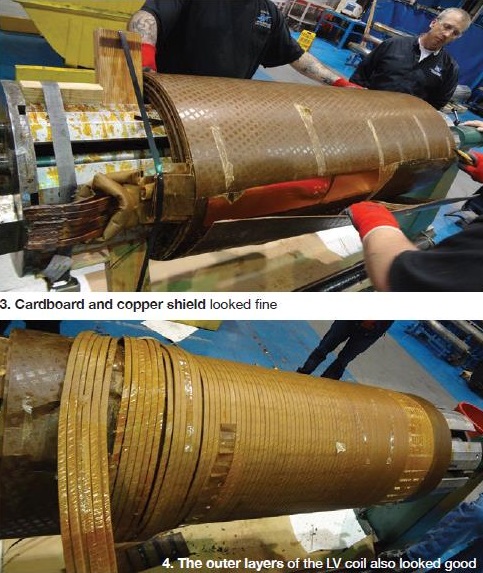 Unmistakably, there was a short circuit, coil-to-coil, fault in the low-side C-phase coil. The cause of the fault was never determined. Conclusion: A major outage was averted by carefully testing and monitoring the transformer. This case study also shows the benefits of thoroughly testing a transformer during an investigation. CCJ