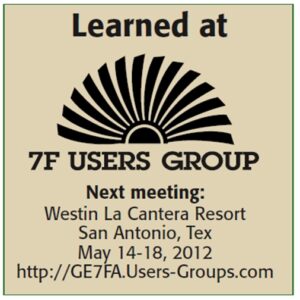 Owner/operators learned at the recent 7F Users Group Conference (May 9-13, Houston) how Xcel Energy replaced an ageing Mark V gas-turbine control system with Emerson Process Management’s (Pittsburgh) Ovation™ on Unit 3 of its Fort St. Vrain Generating Station (FSV), Platteville, Colo. It is believed to be the first time a non-OEM control system was installed successfully on this popular frame.

Xcel Energy Production Specialist Tom Kennedy summed up the project’s success this way: No control system faults or trips since restart of the GT on Ovation in November 2010.

FSV is a 965-MW 3 × 1 combined cycle plant anchored by a 330-MW steam turbine installed in the 1970s as part of the country’s only high-temperature gas-cooled reactor project. The nuclear unit generated first power in December 1976 and was shuttered in 1989.

The steamer is known as Unit 1. The first gas turbine at the site, the Model 7221 Unit 2, was installed in 1996 as a simple-cycle peaker. Kennedy said that engine was built with the OEM’s first commercial DLN2.6 combustion system.

Unit 3 was selected for a controls upgrade first because it was the GT for which a major overhaul was scheduled in 2010. The Unit 2 Mark V is older, but the engine’s next major would not be until 2015. Maintenance costs for the Mark V were increasing and parts would soon be difficult to find.

FSV plans to upgrade the control systems on the remaining turbines, depending on budget support and other factors, during their next major inspections—tentatively 2013 for Unit 4, 2015 for Units 1 and 2.

Decision. The OEM’s Mark VIe was the leading candidate for the Unit 3 upgrade in the early going: It is a proven control system for the 7FA. But Emerson wanted an opportunity to bid and FSV personnel had a deep appreciation for the company’s capabilities having migrated from a WDPF balance-of-plant controls platform to Ovation in 2007. One of the power producer’s concerns was being a “serial number 1.” 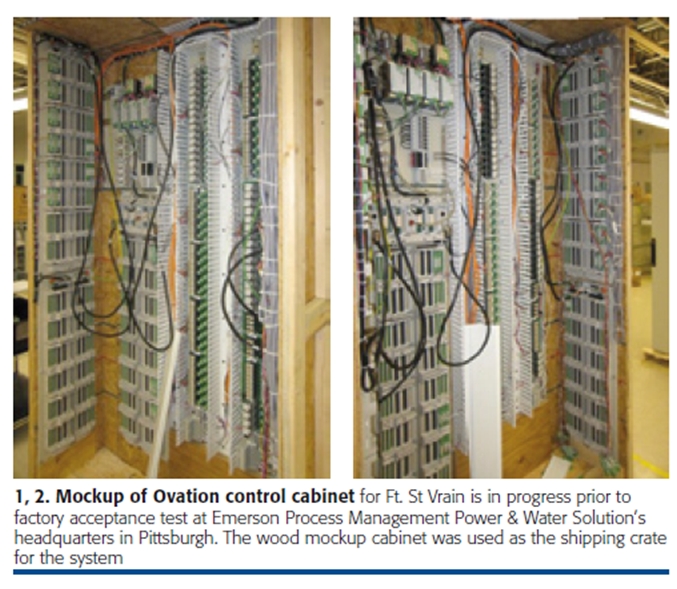 Motivated in part by more favorable pricing than was available from the OEM, Emerson and Xcel agreed that the controls supplier would pursue the project through a simulated proof of concept. If Emerson met the utility’s requirements, the project would go forward; if not, it would be terminated at no cost to Xcel Energy.Emerson “passed.” The factory acceptance test (FAT) for Unit 3’s Ovation control system was conducted in July 2010 (Figs 1, 2) and the upgrade from Mark V to Ovation was incorporated into a 42-day major inspection last fall (Figs 3, 4). The controls work was not on the critical path.

Kennedy said the controls upgrade did not hamper other outage work—which was mostly mechanical in nature. However, the outage made some tasks more difficult for the controls team, which had to hard-wire all I/O points into Ovation and loop-check every component. Specifically, every wire that went into the Mark V had to be disconnected and then reconnected to the new system.

For others who might consider a similar project, Kennedy provided the following guidance: Allow three days for demolition, one for installation of panels (assuming peripherals are already installed as they were at FSV), nine days for retermination, 10 for loop checks, and a day each for calibrating valves and functional testing. Finally, schedule a three-day commissioning period.

The controls expert said the project was reasonably straight-forward. A few hiccups he mentioned are these: 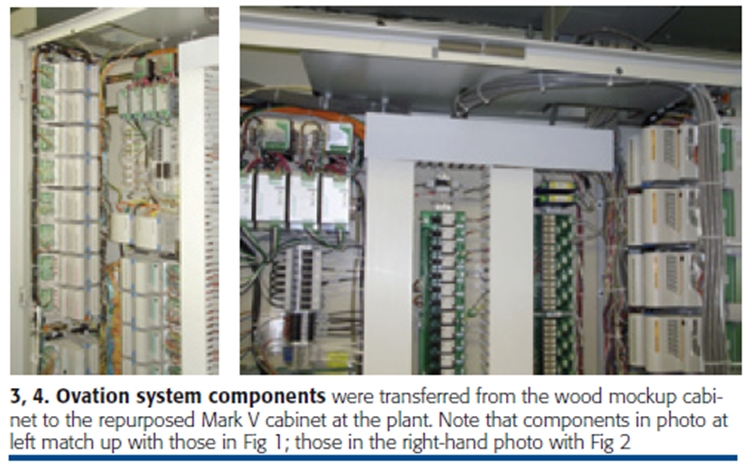 Operators are happy with the Ovation GT controls, Kennedy said. Graphics and logic are much easier to change than they were for the Mark V. Also, there have been no data-link failures, which had been much too frequent.

Interestingly, using the SAMA logic provided with Ovation, I&C techs can now trouble-shoot the remaining Mark Vs at the site more easily. The OEM’s logic diagrams reportedly are difficult to navigate. Two more benefits provided by conversion to Ovation: Operators I/E techs only need to maintain proficiency on one control system and spare parts requirements are greatly reduced. CCJ