Plant Manager Dean Motl and the staff at New Harquahala Generating Co LLC (NHGC), Tonopah, Ariz, always have the welcome mat out for the editors. This is an “involved” group, participating in and presenting at user-group meetings, contributing their ideas to the CCJ’s Best Practices Awards program, etc. Motl believes in sharing the plant’s success stories because he knows the dialog will beget ideas for New Harquahala in return. Everyone can learn, he says.

NHGC, which began commercial operation in fall 2004, has three 501G-powered 1 × 1 combined cycles with a total capability of 1092 MW. It is owned by MachGen Holdings LLC, managed by Competitive Power Ventures, and operated by NAES Corp. The merchant plant’s “run season” typically extends from mid June through mid October.

A few months back, the editors were driving to Phoenix and called ahead with the hope of “catching up.” Motl was waiting at the door at noon and invited the editors into the conference room where most of the available staff was gathered to listen to a lunch ’n learn presentation by Hal Scott of Proton Onsite—formerly Proton Energy Systems—on the benefits of generating hydrogen at the plant rather than having it trucked in.

Some facts noted during the presentation:

Next, the advantages of onsite production were noted: high purity at low cost, no demurrage charges on bottle trailers, better neighbor (no large trucks traveling on local streets), no hydrogen stored onsite, etc. Back-of-the-envelope calculations for NHGC put the payback period at about 15 years based on economics alone. That number would drop depending on the value placed on enhanced safety, being a better neighbor, etc. Where Motl’s plant is located the “soft” benefits would likely have little positive impact on a buying decision.

Scott and the pizza finished, it was time to learn how Motl and company were improving plant performance and personnel safety. First stop on the plant-wide tour with Motl, Operations Manager Jake Mattingly, Maintenance Manager Chris Bates, and Plant Engineer Nick Hayes was the warehouse. The first thought that runs through your mind: Why are we stopping here? 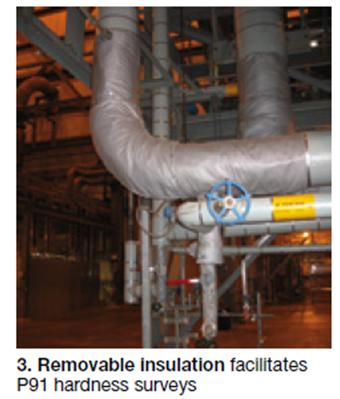 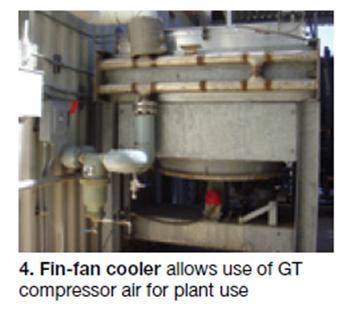 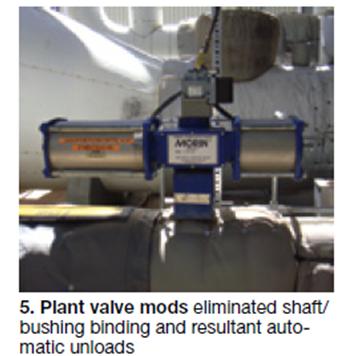 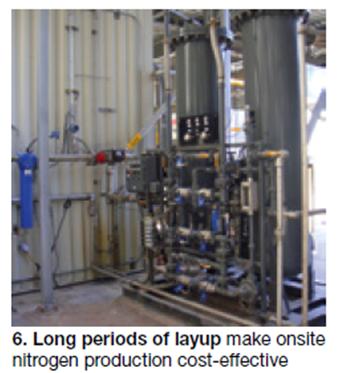 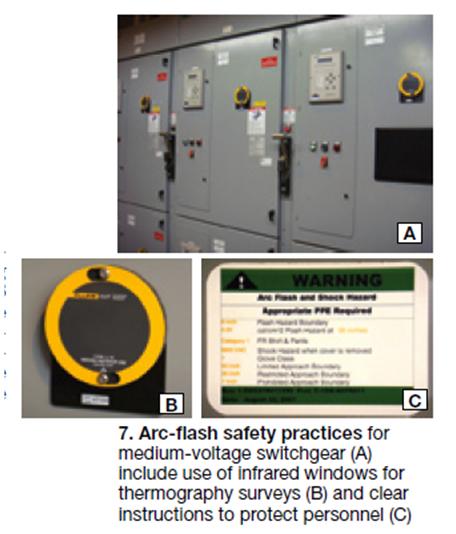 Good reason: The warehouse essentially runs itself. There is no person checking things in and out. Packages are received by the maintenance staff and placed on a shelf where advised by a document (for example, boiler-feed pump parts are Aisle X, Section Y). Inventory control is accomplished when a particular part is removed and work-order and part bar codes are linked. Might not work in Crooklyn, but in the Arizona desert it’s a success. The last two semi-annual inventory checks revealed shortfalls of less than $200.

Walking to the next stop at the gas receiving station, the group passed the cooling towers, scene of the plant’s success in eliminating lube-oil issues in fan gearboxes. If you are not familiar with how NHGC put an end to problems with lube-oil contaminants, including water, for an out-of-pocket cost of only about $4000 per cell, read “User group gets an assist on fan gearbox lube-oil solution” in the 4Q/2009 issue. You can access it at www.ccj-online.com. A significant side benefit was a safer work environment.

The gas receiving station shown in Fig 1 consists of two 100% coalescing filter towers. They were installed two years ago after a hydrocarbon slug did some damage. The gas supplier created the slug during pigging and maintenance operations. The plant is connected to the main line with a single radial tie.

It seemed strange walking around a huge plant like New Harquahala and being able to carry on a conversation. But Motl said the facility can spring to life virtually in a heartbeat. It can be brought out of standby condition and started in less than half a day. The plant manager also was quick to point out that work never stops; improvements are ongoing.

A case in point: The digitizingof P&IDs so everyone has access to the latest drawings via SharePoint® (“Improve plant communication, document control,” 1Q/2011, Best Practices Awards for Management). Interestingly, these drawings often are linked to images of specific equipment so personnel assigned to an O&M task can readily identify them in the field.

Another project was to label and barcode all pipes and components (Fig 2). A barcode scan links to the work management program and other documentation that provides relevant information for maintenance, repair, replacement, operation, etc.

Plant and instrument air are taken from the compressor shells of operating units. Air flows via the kettle boilers (rotor air cooler, RAC) to a fin-fan cooler/pressure regulator/water separator. The unit shown in Fig 4 serves the entire plant. Unreliability of plant air compressors forced this design modification. They tripped frequently in summer, resulting in unreliable air availability. The alternative, a standby diesel-powered compressor, cost $10,000 per month to rent (plus fuel). The original air compressors are used in cooler weather when the plant is not in service.

Certain operating conditions call for air to be bypassed around the kettle boiler. Unfortunately, the bypass valve was prone to sticking in the closed position (Fig 5). Plant personnel traced the problem to materials incompatibility at the temperatures experienced. Solution was to change the bushing material to Stellite from Type 316 stainless steel; the shaft to Type 422 stainless from Type 316.

While the economics of onsite hydrogen production was not a slam dunk, onsite production of nitrogen is. The 600-scfm Parker DB-4000 nitrogen generator shown in Fig 6 paid for itself in about 18 months because of the large volume of gas required during layup (three G-class triple-pressure HRSGs, kettle boilers, and welding purge gas).

Protection of personnel against arc flash was a major safety initiative at NHGC. Fig 7 shows the infrared windows used to allow thermographic monitoring of medium-voltage switchgear without opening panels. Clear, concise instructions also are mounted right on the panels.
SCR fans with grease bearings were prone to overheating in summer and tripping, much like the air compressors. Solution was to retrofit with a water-cooled bearing housing and use oil for lubrication.

Finally, if you’re interested in how New Harquahala converted from a passive to proactive vibration monitoring system and about the benefits that accrued to the plant, access “Hands-on vibration monitoring program safeguards critical rotating equipment,” 1Q/2010, Best Practices Awards for BOP O&M. CCJ