Powerplant work can be a humbling experience. It seems that once you begin feeling overly comfortable about how well your facility is running, something unexpected occurs and snaps you back to reality. You can blame the “bad luck” on the gremlins, but more likely the cause was human error.

Consider the following experience at a 1 × 1 combined cycle assembled in 2001 from a W501F gas turbine, a 114-MW steam turbine from a retired 1958-vintage coal-fired plant, and a triple- pressure Nooter/Eriksen HRSG designed for operation at a main-steam pressure of 1750 psig:

A maintenance technician working in a control/breaker cabinet accidentally tripped two breakers. He responded immediately, returning them to the “on” position. However, re- energization caused the flow-proportioning/temperature control valve TCV 12 (Figs 1 and 2) to fully close. 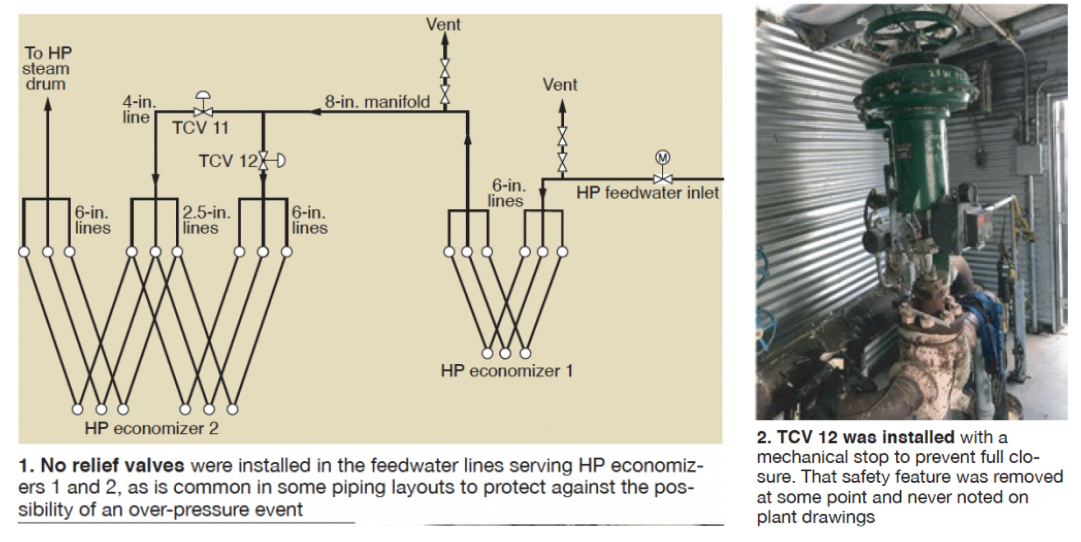 With turbine exhaust gas still flowing through the HRSG, water trapped in Economizer 2 by the closed valve flashed to steam. Pressure increased to the 5000 psig or so engineers believed it took to burst the joint between one of the 6-in. riser pipes and the SA 106B 8-in. manifold shown in Figs 3 and 4. The good news: No one was hurt. 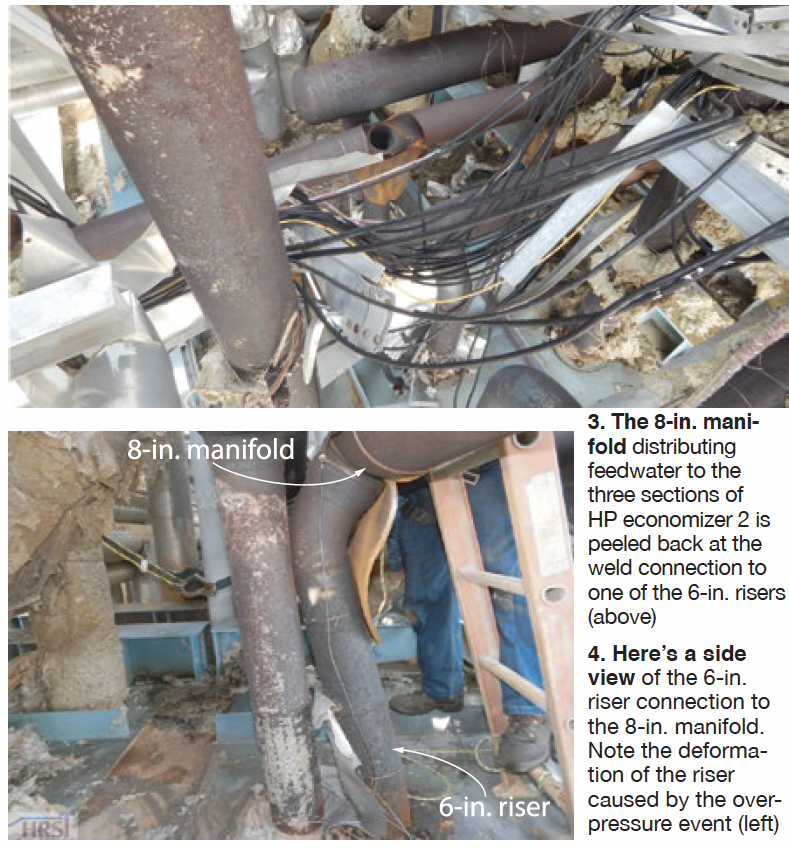 This accident happened because there was no way to safely relieve a pressure excursion in the feedwater system between the HP feedwater inlet to the two-stage economizer and the steam drum. This was not a design oversight. Rather, a mechanical stop installed in TCV 12 to prevent it from full closure had been removed, unbeknownst to anyone on the current staff.

The generating unit had been sold by its utility owner to an independent power producer about six years prior to the incident and there had been personnel changes. As many have learned, some of the historical information important to O&M operations does not transfer well—or not at all.

There are alternatives to the mechanical stop to protect against the inadvertent full closure of control valves in this type of service: Relief valves could be installed in the feedwater lines to the economizer (ahead of HP economizers 1 and 2 in this case) or an unrestricted bypass could be routed around the control valves. All of these methods are acceptable to the ASME Boiler and Pressure Vessel Code.

HRST Inc, Eden Prairie, Minn, was dispatched to the site immediately after the over-pressure event. Results of the company’s inspection—including no flow-accelerated corrosion indications, no bulging or cracking of piping or tubes elsewhere in either section of the economizer—were discussed with plant staff and incorporated into the RCA (root-cause analysis) investigation conducted by NAES, the plant operator. Advanced NDE techniques and hydrostatic testing were used to evaluate system health.

Finite-element analysis revealed high bending stresses at the joint where the failure occurred. Fatigue stress caused by many expansion/contraction cycles over time may have been a factor in the failure.

During the investigation and repair stages of the project, the valve-close event was replicated multiple times with the same result: Power failure resulted in the same valve closing. There was no explanation as to why a power-loss event signals TCV 12 to close. At least some of the members of the accident investigation team hypothesized that the Siemens TXP control system might be somehow involved. Most O&M personnel consider that system obsolete and not user friendly. Few in the industry are said to have the knowhow to troubleshoot TXP successfully.

An unvalved, ¾-in. bypass line was routed around TCV 12 to protect the system going forward. TCV 11 had an intact mechanical stop and did not require a bypass.

Damage was local to the failure location. However, the repairs required were extensive, spanning 2½ months and totaling about 10,000 man-hours. In addition to the obvious pipe replacement activity, significant quantities of cabling and cable trays, insulation and cladding, and heat tracing were replaced. Plus, building repairs were necessary. As many as eight contractors and 30 craft personnel were onsite at one time.

Recommendations to others based on lessons learned: