Challenge. Over the last several winters, Pleasant Valley experienced several fuse failures in its static frequency converter disconnect cabinets for the starting systems of the plant’s V84 gas turbines. Failed starts and forced outages were a result. Note that the 450-amp/4000-V thyristor type fuses are expensive.

Solution. Plant personnel consulted with the turbine OEM and fuse manufacturer, and shipped a failed fuse to the latter for evaluation by its engineers. From this investigation, the root cause of the cracking was found to be moisture entering the cabinet. The moisture would migrate into the fuses and during freezing conditions the water would expand and crack the ceramic housing of the fuse.

Plant staff concluded there were two issues it needed to address to mitigate this problem:

Staff evaluated the existing heating system and decided it was not adequate for the harsh Minnesota winters, so installation of a more robust heater took precedence (Fig 1). Also, the cabinets were not insulated, so personnel added 1-in.-thick foam insulation to the interior of the cabinet to help retain heat (Fig 2).

To reduce moisture ingress, the door seals were replaced with improved clamps, also seen in Fig 2, to provide a more positive seal. These measures also reduce the likelihood of condensation buildup inside the cabinet. Finally, a temperature monitor and a pilot indicator light were installed to confirm the heater is running and effectively heating the cabinet (Fig 3).

Results. The changes were implemented in fall 2012, and during winter 2013 there were no fuse failures in the starting system. When fuse failures occurred in the past, the unit had to be placed into a forced outage and taken off turning gear. Operators would then don arc-flash gear and ground and bond the bus bars before the fuse could be replaced. Process was quite time consuming. In addition, no replacements of the $1600 fuses have been incurred since the implementation of these changes. 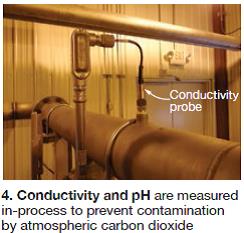 Challenge. Pleasant Valley Station uses demin water for compressor washing, water injection, fuel-oil purging, etc. This ultrapure water is maintained below 0.5 µS conductivity and at a pH between 6 and 9.

In the past, operators would draw a sample at the pump skid and then use handheld testing equipment in the plant lab to test the water. Through trial and error and some research, it was discovered that ultrapure water, in fact, has an affinity for carbon dioxide which can rapidly affect the results of the tests. To confirm, operators pulled the sample and immediately placed the handheld conductivity probe into the water and could see the value increasing in a matter of seco 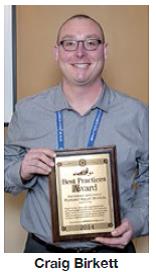 Dissolved carbon dioxide also associates with water molecules to form carbonic acid; thus having the sample open to atmosphere was affecting pH readings, too. Personnel decided to change testing methods to increase the accuracy of results.

Solution. The station procured and installed a system to monitor pH and conductivity “in process” so that the water does not come into contact with air, and therefore, it is not getting contaminated by carbon dioxide (Fig 4).

The pH probe and conductivity probe are specifically designed for ultra-pure water and both output to a common controller for easy monitoring and calibration. This enables operators to more accurately track demin-water quality.