Even if you don’t have a steam cycle, chances are your gas-turbine plant uses plenty of treated water—for evaporative cooling or inlet fogging, water/steam injection for NOx control and/or power augmentation, and possibly as the cooling medium for intercoolers if they are incorporated into engine design (Figs 1-3). The quality of this water is critical to minimize deposition and corrosion problems. 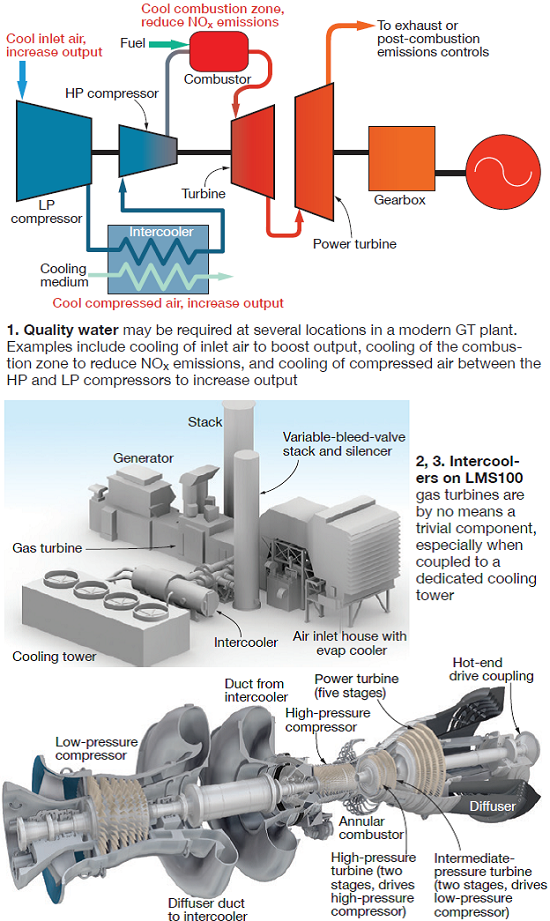 It is doubtful anyone would dispute the importance of maintaining strict treated water quality characteristics or of having a reliable water treatment, storage, and feed system. In many locations, emissions permits dictate that if the NOx injection steam/water isn’t available, neither is the plant. Unfortunately, much of this water cannot be recovered and recycled as it is lost to atmosphere through the GT exhaust.

However, Consultant David Addison, Thermal Chemistry Ltd, who serves users globally from company headquarters in New Zealand, raises the issue that many owner/operators find it difficult to comply with water-quality specifications generally issued by the GT OEM and the means of ensuring that they are met.

At the International Association for the Properties of Water and Steam (IAPWS) PCC Workshop, held in Moscow last year, he distinguished between the OEM water-quality guidelines—usually written to cover a range of gas turbines, fuels, and ambient environments worldwide—and what happens in practice. These guidelines (Table 1) may cause confusion among OEMs, A/E and EPC firms, and owner/operators.

Regarding the last point, keep in mind that while water at the outlet of the treatment plant/skid may meet or exceed the OEM’s conductivity specification, it immediately absorbs carbon dioxide after being transferred to the storage tank. CO2 in the air dissolves into the water and immediately ionizes to form carbonate ions, increasing conductivity and lowering pH (more acidic).

Inexpensive, inaccurate inline high-conductivity pH and conductivity analyzers typically are installed by the A/E or EPC at the outlet of the storage tank upstream of the GT. What’s more, the grab sample and analysis procedures are also not suitable for ultra-high-purity water. 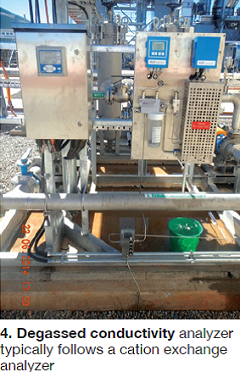 The ensuing “drama” among all the actors involved, while project acceptance is delayed because the water specification cannot be met by testing at the site, is addressed by the following:

IAPWS is considering a Technical Guidance Document (TGD) to address these gaps, although Addison enumerates the challenges, among them:

In the meantime, Addison suggests that a standard demineralized-water specification (Table 2) be considered by the OEMs. The changes address (1) that most of the problems arise from CO2 ingress and (2) that pH analyzers don’t have the necessary accuracy for this application, while keeping an allowance for contaminants from the fuel.

Comments from the GT user community and its service providers are welcome (write scott@ccj-online.com) and will be conveyed to Addison and others in the IAPWS. CCJ