Operator training is an ongoing theme in CCJ. Gone are the days when you could hire a capable mechanic off the street who could then learn what he needed to know about powerplant equipment on the job from an experienced technician or supervisor.

One reason might be that the experienced people have retired and there is no one left to learn from. Another: Staffing has been cut to the bone with remaining personnel assigned multiple responsibilities that management believes require only superficial knowledge rather than in-depth know-how.

At some point, this philosophy can bite hard and deep. In process plants, production is impacted; in institutions it might mean no hot water cool air, and heat. Risk can be mitigated by spared equipment, of course, but that’s a rarity today, having been eliminated the sharp pencils of financially oriented executives who also cut staff.

If you are still pooh-poohing the value of formal training, consider the case history that follows and think about how much less expensive it would have been than the repairs required. This experience was shared with the editors by Bryan Grant, steam-turbine reliability manager for HRST Inc.

You’re probably most familiar with HRST’s inspection and design services for heat-recovery steam generators. However, the company has been supporting owner/operators since 2015 with steam-turbine inspection, failure-mode analysis, and repair management needs.

Grant began by reminding power professionals that the useful life of a steam turbine’s steam path is determined primarily by two factors: steam quality and steam purity. Lose control of either parameter, he said, and the results can be devastating.

The focal point of Grant’s lesson learned is a 1.5-MW, single-stage turbine supplied by 30,000 lb/hr of 400-psig saturated steam, the type of machine you might find driving a feedwater pump in larger plants. This facility was using the small turbine/generator to offset electrical demand while reducing steam pressure for process use.

Plant personnel had observed a steady decline in turbine performance throughout the machine’s five-year service life. Management hired local labor to open the unit so stationary and rotating steam-path components could be inspected as a first step in determining why unit performance had declined.

Operator interviews, Grant continued, revealed that the standard operating procedure implemented during turbine commissioning had omitted use of the nozzle-block belly drain valve. The function of this valve is to remove condensate produced during cool down after it is removed from service. Operations personnel verified that the valve had not been opened prior to starting the turbine. Increasing the concern was that the turbine’s operating profile dictated two or three starts weekly in support of process requirements.

The investigation concluded that the root cause of erosion was condensate induction at the nozzle block during startup. When the unit is shut down and cooled, condensate forms inside the casing at low points—specifically, the belly of the turbine casing and the belly of the nozzle box. Each low-point location has dedicated drain lines and valves to evacuate condensate prior to startup (Fig 4). 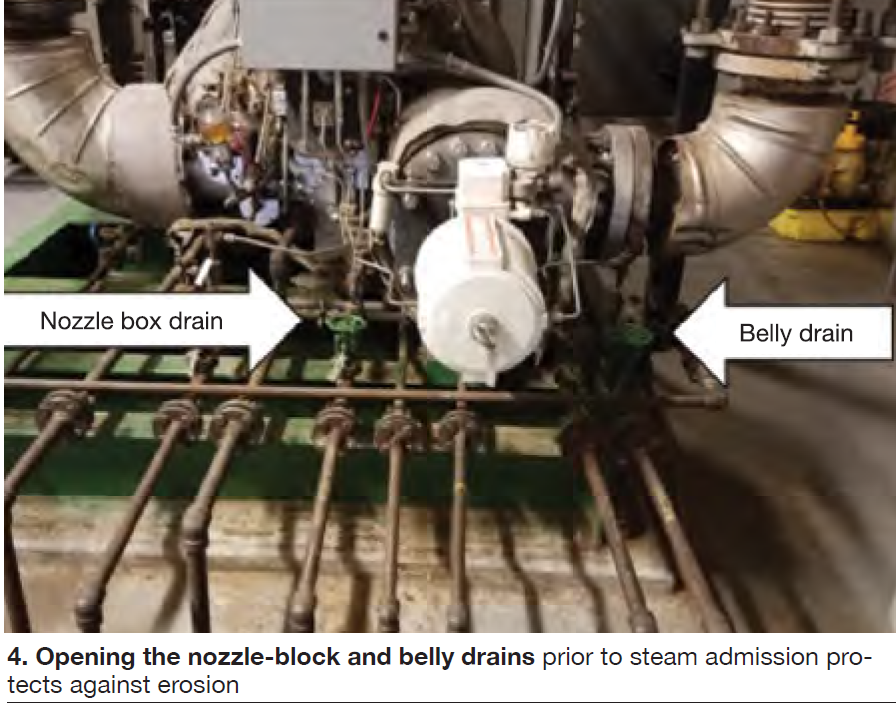 In this case, opening the nozzle-box drain valve before admitting steam to the turbine was not part of the standard operating procedure. Thus, the unit had been slugged with condensate hundreds of times since commissioning.

Management’s bad: Capable operating personnel had never been trained properly. The oversight has since been corrected by updating operating procedures and by training. Finally, Grant said, the turbine was restored to as-new condition by refurbishing it with new steam-path components (Figs 5-7). CCJ