Challenge. A decade and a half after COD, Missouri River Energy Services’ (MRES) Exira Station, a 3 × 0 LM6000PC-powered peaking facility, located in southwestern Iowa, found itself with obsolete control systems in a rapidly evolving industry requiring the latest technology to assure safe, reliable, and profitable operation.

Here’s an overview of the situation:

Chiller purge and control systems also required upgrading, to restore vendor support. The purge system had to be replaced and to do that chiller controls had to be upgraded.

Fuel and water valve drivers were of an analog type that continued to supply a dither signal to the valves even when they were shut down. A dither signal is good when the unit is in operation, to keep the valve from sticking and ready to respond to any load changes. But continuing to dither the valve when it was shut down, increased wear and was conducive to premature failure.

Upgrade to a new digital valve positioner allowed more options—including a 0% cutoff that shuts off the valve if the unit is not running. These valves cost about $20,000 just to rebuild, so reducing premature failures improves availability and saves maintenance dollars.

The security cameras were old and the software was still running on a Windows XP machine. The video image was not satisfactory and some cameras were failing.

The digital network at Exira, and between the plant and the Sioux Falls control center, had to be refreshed. This brought the IT department into the project.

Solution. There were two main goals to accomplish in support of Exira’s Controls System Upgrade Project. They were:

Work on the project started about two years before the physical effort began, with the development of a preliminary scope which was sent to various vendors for budget estimates. The budget submitted to the board for consideration was for $3.3 million.

Outages and equipment installations scheduled in 2016 were as follows:

Results. Today, Exira has all the main control systems—turbines, BOP DCS, and cooling tower/chilled water—on the same Rockwell Allen Bradley platform. Because all the systems are Allen Bradley, the interfaces among the systems are seamless, eliminating the server formerly used to translate the communications among all subsystems to get them to work together.

Plus, with all systems on the same platform, training and maintenance are simplified, dependence on specialized service providers (such as OEM reps) is lessened, finding new employees with applicable control system experience is easier, spare parts are shared among systems, reducing warehouse inventory, etc.

Challenge: Stricter limits on waste-water discharges imposed as part of the NPDES permit renewal process made it impossible for Exira Station to consistently comply with the new rules as the facility was originally designed and operated. Challenges faced included the following:

Solution: Plant management decided that the optimal solution strategy was to eliminate the discharge of waste water from the plant. Their options:

The last alternative was selected. A recycle-water treatment system was installed. It consists of an underground collection tank for blowdown, plant drains, etc, and a high-efficiency filtration system that recycles processed water back to the raw-water storage (makeup) tank. Filter backwash is retained for offsite disposal.

Critical to the success of the ZLD concept employed is the relatively small amount of makeup required for the cooling tower compared to that needed for NOx control. This differential assures the dilution of blowdown required for economical operation of the demin system. 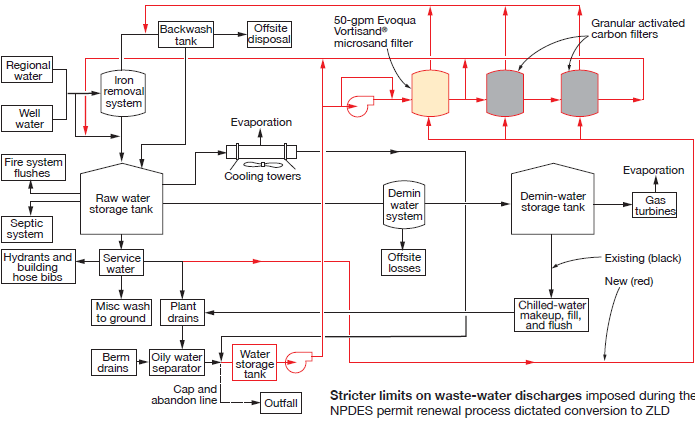 Here are some typical summertime (June through September) round numbers to put all this in perspective:

Results: The cooling tower was designed for four cycles of concentration in summer but was limited to less than two cycles to keep all of the monitored parameters below the required NPDES limits. Negative impacts of fewer cycles: Excessive blowdown (increased makeup) and inability to maintain inhibitor/dispersant chemical levels at optimal levels to protect piping and equipment.

Conversion to ZLD (diagram) restores the original as-designed capability, thereby reducing blowdown (and makeup) and improving the effectiveness of cooling-water chemicals. Plus, collection of all drains means rainwater gathered from the berms also flows to the makeup tank (via the recycle-water treatment system). This reduces the consumption of water from wells and the regional provider.

Finally, because the plant doesn’t discharge, there’s no need for sampling and analysis, and no violations.