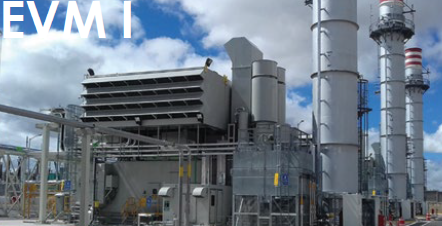 Challenge. The semi-arid climate in the agricultural area home to the 3 × 0 LM6000-powered Energia del Valle de Mexico (EVM I) powerplant is conducive to a large amount of dust during the dry season. In addition, a new combined-cycle plant (EVM II) is being built 300 meters from EVM I, contributing still more dust as a consequence of earthwork, excavations, and heavy-equipment transit.

Dust clouds caused the gas-turbine prefilters to load to capacity in about five weeks. The higher pressure drop at the inlet, combined with excessive fouling of the compressor, led to a rapid loss in power production.

EVM had installed a chiller for power augmentation, but the large amount of dust that accumulated in its coils made it almost impossible to operate the system in a continuous and efficient manner.

In less than a year of operation, the plant had replaced its final cartridge-type filters twice and suffered a 4% decrease in output, on average. Fig 1 illustrates the performance degradation over time. 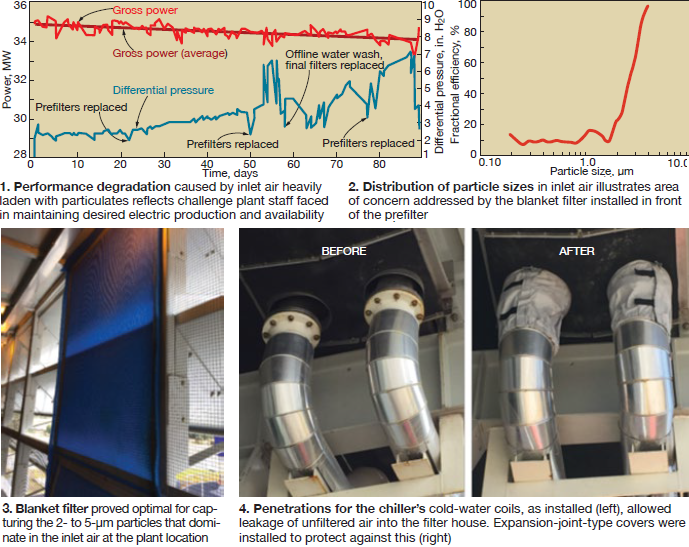 Solution. After analyzing the causes of the sudden increase in differential pressure across the “typical” air filters installed, staff decided to tackle the root cause of the problem: Reduce the quantity of large-size particles in the inlet air to avoid rapid filter plugging. This required use of an additional level of filtration to improve the performance of the original filters.

Plant personnel contacted several specialists in air filtration to advise on prefiltration options. Among them was an inexpensive filter blanket, which was installed. The Poret® polyurethane foam filter from EMW Filtertechnik has 10 pores per inch (PPI). It was installed as a prefilter curtain, taking advantage of the mesh installed in the weather hood of the filter house. Claimed advantages of polyurethane foam are its density, resistance to compression, and difficulty to break. The cost of implementing this filtration solution was $1000 for each of the plant’s three turbines.

Installation and testing were conducted in May 2018. The 10-PPI filter selected proved optimal for capturing the 2- to 5-µm particles that dominate in the inlet air at this location (Fig 2). In addition to Poret’s favorable filtration characteristics, it is supplied on a roll and easy to install (Fig 3).

Plus, it’s washable and reusable. The washing interval at EVM I is five months. Compressor offline washes and prefilter blanket washes are done at the same time to minimize the impact on plant availability. Expected lifetime of the filter blankets at EVM is three years.

In addition to the foam filter, some expansion-joint-type covers also were installed to prevent unfiltered air from entering the fine filters and to reduce premature fouling of the compressor (Fig 4). The unfiltered air had been leaking into the filter house via the penetrations provided for the chiller’s cold-water coils.

Results. Installation of the filter blankets and pipe-joint covers was done with in-house labor to minimize project cost. The pressure drop of clean (new or washed) foam filters is 0.28 in. H2O; washing is done when the pressure drop reaches 0.50 in. H2O. Note that the very low pressure drop incurred by the blanket filters does not significantly impact the total pressure drop across the entire air filtration system; hence, impact on electric production is minimal. 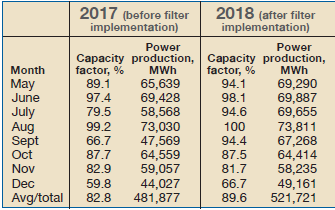 The blanket filters enable the plant to achieve a nearly constant electrical output throughout the year and a higher capacity factor than was possible before their installation. More specifically, the reconfigured air filtration system (1) increased the interval between compressor offline washes from quarterly to semiannually, while improving plant performance (table); (2) extended the life of the original prefilters from a nominal four months to one year; and (3) enabled an doubling of the replacement interval for fine filters from one year to two.

Plant personnel predict a cost saving of about $800,000 (net present value) in prefilters and fine filters over the next 20 years because of the Poret blankets.