OEMs include generator maintenance recommendations in their O&M manuals. Sometimes they also issue general instruction documents, to be applied to their entire fleet, including machines already in operation. One such document is GE’s “Creating an Effective Generator Maintenance Program” (GEK 103566), which recommends achieving machine reliability through consistent maintenance frequency, testing, and inspections.

This valuable document for generator owner/operators has been issued over the last 23 years and has evolved through about a dozen versions. Thus it can be used to illustrate maintenance philosophy changes that have occurred in the industry during the last quarter-century. Similar changes also have been implemented by other generator manufacturers and utilities. 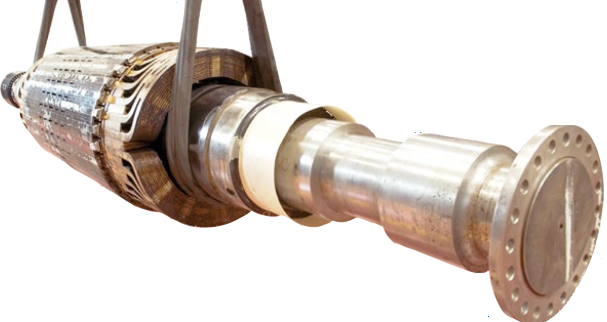 The following brief review of GEK 103566 historical documents reflects these trends, among others:

It recommended a time-based maintenance frequency: minor outages every 30 months (with end shields dismantled but field remaining in place) and major outages every 60 months (including removal of the field from the stator), with the first major outage scheduled a year after generator first operation. Note that inspections of old, long asphalt-insulated generators were recommended more frequently.

In principle, this time-based maintenance strategy matched the OEM’s instructions issued prior to publication of GEK 103566.

The document included the standard and optional tests to be performed during each outage type, as well as the visual inspection areas

2002. The revision GEK 103566A (2002) kept the above maintenance frequency but brought one significant change: A major outage can be performed as before by removing the field from the stator or, alternatively, by robotic inspection. The robotic device has video camera capability, and it can also test stator wedge tightness and core shorted laminations (ELCID).

The tests table was rearranged separately for stator and rotor, classified by type of cooling (air, hydrogen, or direct water); continuous monitors (stator partial discharge, field shorted turn) were added. The document also mentioned some operational events that would have a certain impact on maintenance planning.

2003 to 2012. These subsequent versions of the document presented just minor changes. Some flexibility regarding the first major inspection appears in GEK 103566B (2003) of up to two years, depending on operation hours and starts/stops. Version B added details about robotic inspection capabilities and minimum possible air gap.

GEK 103566E provided separate tables for stator and rotor and, in between, a new table dedicated to water-cooled stator leak tests (with fewer requests for hydraulic integrity test skid—HIT skid—in case a high-performance stator leak-monitoring system is installed). Revisions G (2011) and H (2012) were almost unchanged, except for some minor notes about ELCID (optional in place of standard test) and wedge-tightness test criteria.

2014 to 2015. GEK 103566J (2014) was a completely rewritten revision, with significant changes. The recommended inspection intervals were no longer calendar-based; they were synchronized with the prime-mover schedule.

Minor and major outages became defined in terms of gas/steam turbine hours and number of starts (whichever comes first) and according to the generator model. The first inspection requirement was also after a specific number of operating hours or starts. Instead of major outages every five years, the OEM recognized that some powerplants may run for extended inspection intervals of from six to 10 years.

The fretting wear caused by turning-gear operation was mentioned. The document also recognized that the robotic inspection may not eliminate the need to remove the rotor if an issue is discovered and should be corrected—for example, replacement of stator wedges. No significant changes appeared in the test tables, except they now included visual inspection and clearly distinguish between robotic and rotor-out major outages.

The preferred method for field shorted-turn testing is mentioned to be the flux probe. A new section and table presented recommended NDT frequency and opportunities to check for cracks in the rotor forging bore (if it has one) and slots, field wedges, and retaining rings—according to the applicable TILs. Revision K (2015) remained mainly the same, except for some clarifications about turbine hours and turning-gear limits.

2017. GEK 103566L, dated February 2017, is again a major revision. It declares the intention to remove the generator rotor only when a repair requires necessary access (but mentions that some generator designs may still require rotor removal).

A new table shows examples of events or trends predicting the need to remove the rotor. The historic generator terms minor and major outages are not used anymore and they are respectively replaced by borescopic and robotic inspections.

The difference is a borescopic inspection is typically done via a manhole or by removing a cooler (the end shields do not require removal). These inspections alternate in time; however, after many years or numerous starts, just robotic inspections are recommended.

A modified and simplified table indicates the first and subsequent maintenance intervals. A few examples of inspection-interval charts are included, and they reflect synchronization with gas- or steam-turbine outages. This version mentions other plant equipment that requires periodic servicing and adds over-speed to the list of abnormal operation events.

The test tables are updated and rearranged; tan delta test is added for stator windings, new remarks are added about bushing replacement and PD tests, etc. The water stator leak tests table still treats high-oxygen systems, but some details are given below it for low-oxygen (Alstom) systems.

A new section and table deal with chemical cleaning (of hollow conductors of water-cooled stator bars), mainly giving explanations about high- versus low-oxygen systems and monitoring for cooling-water flow restrictions.

Conclusions. The OEM’s philosophy regarding generator maintenance (including existing machines) has changed over time. These modifications indicate the efforts of all OEMs to match their recommendations to changes in the industry, primarily pressures for budget cuts, by increasing the intervals between outages and by performing inspections without rotor removal, etc.

These changes do not come without potential costs—for example:

Finally, a large generator is an extremely complicated machine whose reliability is essential to the industry. It deserves suitable attention and attention may suffer from being considered just another element of the rotating train to be maintained in the shadow of the turbine. CCJ