It’s no secret that many gas turbines are starting and stopping far more frequently than originally designed for. At the same time, independent system operators (ISOs) are imposing stiff fines for failure to meet startup and performance obligations.

Most plants have adapted to these more aggressive operating tempos and performance challenges, but one component that may be getting overlooked is the starting subsystem, especially for older machines equipped with a load commutated inverter (LCI).

According to John Downing, Turbine Control & Excitation Group (TC&E), the Innovation Series™ and LS2100 LCIs, introduced in the late 1990s and early 2000s, consist of three subsystems, or functions: control section, silicon-controlled-rectifier (SCR) bridge section, and cooling section. For units not originally designed for lots of starts, it was common to have one LCI for multiple GTs, often in a one-to-two ratio. 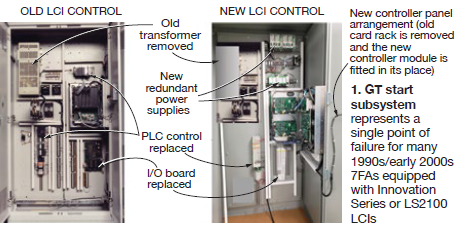 For nearly 25 years, the LCI has provided reliable service. However, with an expected life of 20 years, many have failed, and a substantial number are at, or past, end of life (Fig 1). Failures usually are experienced in the controls and/or the cooling system (Fig 2).

Downing told the editors that in 2017 TC&E responded to 17 forced outages attributed to LCI failures, between Memorial Day and Labor Day, that averaged 36 hours each. The costs associated with lost revenues and penalties for non-performance typically dwarf the costs of replacing or upgrading the LCIs to eliminate this particular source of failure.

Last production of the Innovation Series and LS2100 LCI controls supplied with GE machines was in 2013. Today, replacement parts are difficult to locate; acquisition times of four to six weeks are common. Also, qualified service and field engineering personnel are becoming harder to find as they retire out of the workforce.

Mitigating the risk. Options to address this risk include the following: 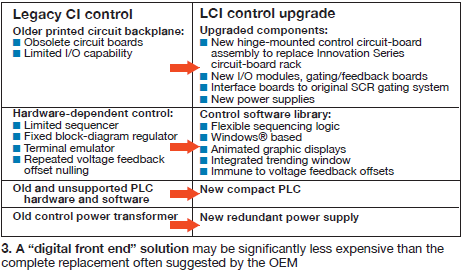 TC&E has partnered with TMEIC, one of the world’s largest manufacturers of LCIs and drives, to provide a turnkey DFE solution that Downing said is far less expensive than the other two options. TC&E/TMEIC also can offer the complete replacement, or additional LCI system, for GE 7FAs and 9FAs. The partnership has more than 15 LCI-experienced field engineers at its disposal.

Guts of the partnership’s offering are as follows: The obsolete programmable logic controller (PLC), standard VME (Versa Module Europa) rack, power supplies, and input/output (I/O) boards are replaced with new processor-based control circuit cards and a new PLC. The new digital controls fit in the existing panels and reuse most of the existing fiber optic cables and connectors.

The typical upgrade project can be accomplished in five to seven shifts; a turbine shutdown is not necessarily required, although, of course, the LCI will be unavailable for that period.

Users react. The degree to which the starting system is a financial risk may depend on the type of owner/operator organization, age of the plant, and other factors. Experienced GT engineers and plant managers contacted about this issue responded that the risk is minimal as long as plant staff is diligent about regular inspection and maintenance, especially of the cooling system components. Older machines from the GT boom period (1997-2003), many of which were designed for baseload service but rarely, if ever, ran that way may be among the highest-risk assets.

All of the users contacted were not aware of an abnormal spike in GT starting-system failures, nor had they experienced failures rates at their facilities out of the ordinary.

According to one, LCI is a general term for one way to implement a medium-voltage variable-speed drive (VSD), variable-frequency drive (VFD), pulse-width-modulated drive (PWM), or static frequency converter (SFC). In other words, LCI, popular in the 1990s and early 2000s, is a very specific circuit and thyristor bridge arrangement that is different from other types of drives.

According to this source, they are less-expensive drives that have tradeoffs—such as harmonics reflected back on the power system—requiring additional isolation transformers, and often can have lower power factors and efficiency.

When an issue arises, the OEM usually recommends upgrading the starting system to LS2100E, which Downing says is similar to the DFE solution offered by TMEIC.

Another user and seasoned GE gas-turbine controls expert adamantly stated that the LCI is very reliable, and “as long as you perform recommended maintenance and TILs (Technical Information Letter), it’s like a forgotten part of the plant.”

Nevertheless, many facilities are owned by financial engineering firms which are fond of cutting every penny of “unnecessary expense,” and sometimes cut too much fat and into the bone. As one user noted, this is very specialized and complicated equipment and very few people have spent much time with their heads in these cabinets.

If this sounds like your site, you might want to take appropriate action, especially since it does represent a single point of failure, regardless of how reliable the original components are. CCJ