Installation of the LEC-III on all three GTs is expected to save Calpine approximately $36 mil­lion, when compared to the capital cost of replacing heat-recovery steam generators (HRSGs), adding alternative SCR (selective catalytic reduction) tech­nology, and purchasing emissions credits. Note that SCRs could not be installed cost-effectively in the original Texas City HRSGs.

But the real story was not what ultimately was accomplished, but rather the innovative thinking and engineering that enabled the dramatic reduc­tion in emissions. A thumbnail sketch of what was done: Replacement of the 14-can combustion sys­tem designed by Siemens Power Generation Inc, Orlando, for the 501D5 GTs at Texas City with a modified 12-can arrangement designed by PSM as a third-party retrofit for the 7EA, a GE Energy frame (Figs 1-6). Don Adams, PSM’s combustion engineering manager, explained that downsizing and customizing PSM’s proven 7EA product was more expedient than designing a new LEC-III com­bustion system specifically for the 501D5.

The combustion system was only about one-third of the job. New control system hardware and software also were needed. To save time and money, PSM teamed with Emerson Process Management, Pittsburgh, supplier of record for the original WDPF control system. Together they developed software that allowed the existing con­trols to communicate with the new expanded sys­tem required by the LEC-III. This eliminated the arduous task of running field wiring to the PSM controls and performing the many required circuit tests.

Some of the other important tasks in the conver­sion program included these: 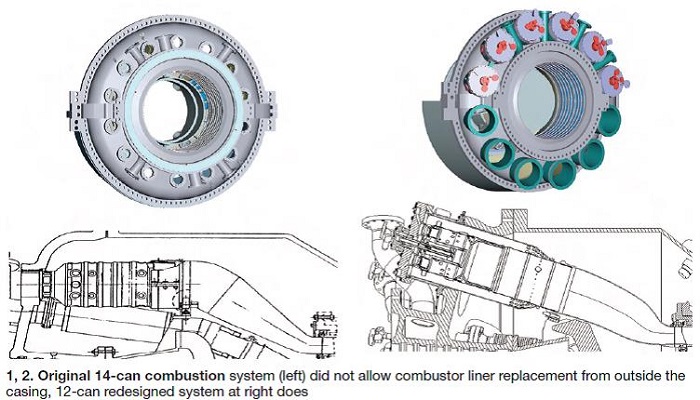 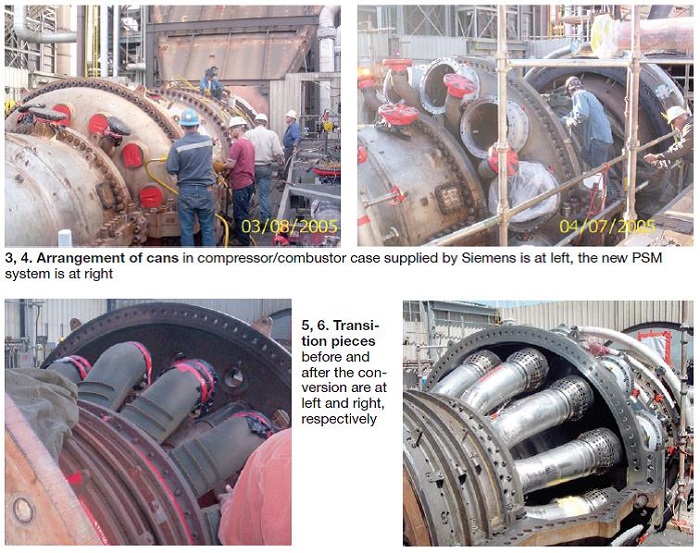 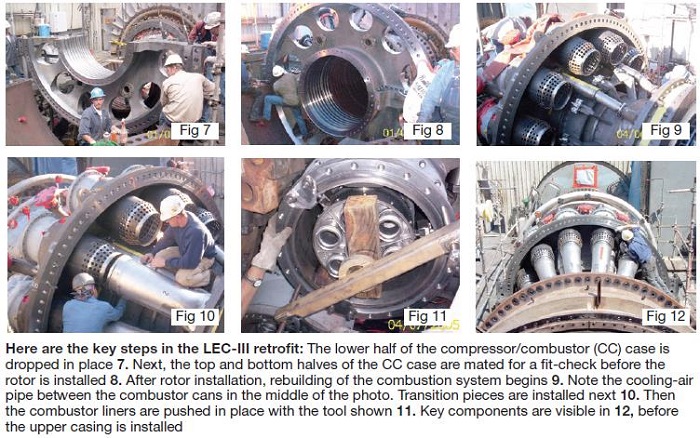 That should not present a problem for Texas City because the LEC-III is designed for sub-5-ppm-NOx operation, which is being achieved at the five most recent installations prior to the Texas City project. PSM’s vision is to get to a guaranteed 2.5 ppm to compete with SCR head-to-head. CO emissions from all retrofits to date are in the low single digits.

Operating experience. Texas City Plant Man­ager Larry Boody and Commercial Manager Ron Anselmo told CCJ editors in an exclusive interview last fall that the converted 501D5 was operating at 6-7 ppm NOx. At that time, Boody thought more tuning might reduce NOx production but was con­cerned with the possibility of a corresponding slight decrease in power production.

The new system is working well and the opera­tors “love it,” he continued. Availability was com­parable to the original at about 98%. Power output is 95 MW, not the 100-105 MW possible with the unit as designed. However that is 2 MW more than expected; 100 MW can be achieved with steam injection for power augmentation. So-called PAG steam is available because steam supplied to the unit for NOx control is no longer needed for that purpose.

Anselmo said that the LEC-III conversion was done at the ideal time in the 501D5’s life cycle. The first unit was due for a major overhaul in spring 2005 and that would have required replacement of combustor baskets, fuel nozzles, and transition pieces in any event.

A normal major for a 501D5 the way Calpine does it, continued Boody, takes 28 days. They scheduled 42 days for the conversion, but finished in about a week less than that. He said unit restart was similar to that for a major. They had to take the machine down a couple of times for tuning, Boody added, but that was no big deal. He said he was surprised that first fire went as well as it did. Note that the state granted the plant an emissions waiver during commissioning.

Both Anselmo and Boody attributed the success of the project to the positive collaborative effort among the participants: PSM; Calpine’s Turbine Maintenance Group, which supervised the conver­sion under the direction of Project Engineer Mack Newsome; and the Texas City staff, which did much of the ancillary work. Boody is confident that the next scheduled conversion can be completed in four weeks.