A visit to every power station these days elicits a story that doesn’t square with a traditional understanding of the electricity industry but makes perfect sense under today’s market conditions. The latest is Armstrong Energy, comprising four dual-fuel, simple-cycle GE 7FA.03 gas turbine/generators installed in 2002 and five 3-MW engine/generator sets installed last year. All four GTs have fogging units to boost capacity.

The site is less than 90 minutes northeast of Pittsburgh, in the heart of coal country, across the street from the 1700-MW (two unit, coal) Keystone Generating Station, and not far from the 1700-MW (also two unit, coal) Conemaugh Power Plant and the 1880-MW (three unit, coal) Homer City Generation LP. Also of significance, Armstrong is adjacent to a 17-billion-ft³ gas storage facility, ties in to a 500-kV transmission line half a mile away, and from the site you can see several of the gas wells drawing from what is commonly known as the Marcellus Shale.

Armstrong’s original purpose as a peaking facility may be in the rear-view mirror for a long time. Dramatizing the shift in “operating tempo,” Matt Denver, plant manager, pointed to a large screen of performance stats in his office showing that the four units experienced a total of 29 starts in 2008, while last year the starts increased to just shy of 600.

The number this year is expected to be even higher. “We’ve been reclassified as a cycling plant, no longer a peaker,” he explained, “and typically the units run over 10 hours before shutting down—seven days a week!” In this case, cycling refers to daily start/stop. “When we are dispatched, the units run at full output,” Denver said.

In any case, it’s a stunning mental picture, a gas-fired GT peaking facility surrounded by large coal units dispatched at the low end of the range typical for a combined cycle (Fig 1). 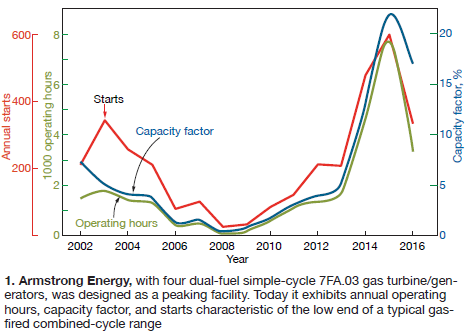 In fact, the units are dispatched so often, a challenge confronting the plant is the emissions limits in the operating permit. “We can go to 28.8% capacity factor (CF),” Denver said, “above that, the owners have to make decisions about significant capital investment in emissions control, perhaps SCR or DLN 2.6+ mods.” Even in the shoulder months of spring and fall, a couple of units are running, with the others in outage.

While most of Armstrong’s output is sold into the energy market, the plant also participates in the capacity performance market. “The penalties are huge, so reliability has taken on new meaning,” To be prepared when power is critical, PJM goes into what it calls a “performance assessment hour,” or PAH, and has no obligation to notify the plant that one is coming. “Armstrong has 15 minutes to start up, close the breakers, and get its megawatts into the grid,” Denver said.

According to PJM documents, every generating resource must comply with the requirements of its host transmission operator. “That means with no excuses.” Denver elaborated: “You get bonuses for meeting PAH obligations, which are paid from the penalties charged to the non-performers.”

Fuel-oil operating hours for the Armstrong units are not insignificant. Thirteen percent of the total operating time has been on oil since 2002. “These aren’t just for testing of the fuel-oil systems, either,” Denver stressed.

Armstrong has been deemed “critical infrastructure” by PJM (though, importantly, not by NERC), hence the addition of 15 MW of engine/generator capacity for black-start capability. “Our ability to fire fuel oil drove that expansion,” Denver explained.

Under the current vagaries of the natural-gas market, much Marcellus supply is currently “shut in,” meaning it either doesn’t have access to transmission for delivery to distant markets or the prices are too low and demand too scant. As a result, “at times, we can get fuel for under $1.00/million Btu,” said Denver. He added, “our plant is fed from the suction side of the gas storage facility across the street.”

At that gas price, even simple-cycle machines apparently can displace coal capacity bidding in the market and economically replace older, inefficient coal capacity being retired.

“Obviously, the maintenance program has to be aligned with the new operating regime,” noted Peter Margliotti, gas-turbine specialist and member of the 7F Users Group steering committee. Armstrong has a contractual services agreement with the OEM but it is starts-based, typical for peakers, he stressed.

“Today, when something breaks in one unit, we fix it in all the other units as soon as possible,” he added.

Intervals between major maintenance events have been shortened. “It seems hot-gas-path (HGP) inspections are coming around the corner all the time now,” Margliotti said. “We’ve had two HGPs with the third and fourth due within the next year. We’ve also done generator inspections, and we saw no dusting; they were immaculate!”

Some of the physical modifications conducted to enhance reliability under the faster operating tempo include:

One area of significant change is in monitoring and diagnostics (M&D). “We’re monitoring metallurgical creep of the blades, nozzles, and casing, and deformation issues as if we had combined cycles,” Margliotti noted, “as well as remotely monitor more sub-system parameters— including lube oil, cooling water, atomizing air, fire protection system, and instrument calibrations.” Margliotti and his team have designed custom screens in the Mark VI automation system for this purpose (Fig 2). 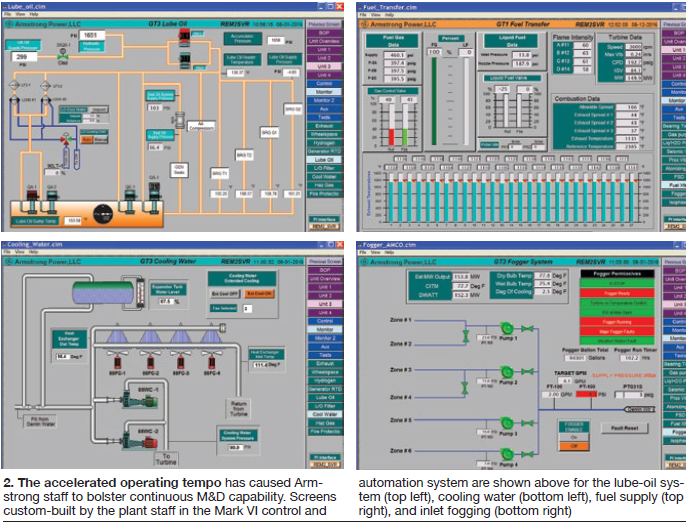 Both Margliotti and Denver credit their small, but dedicated staff for the continuing success of the plant in the face of dynamic market changes. “We haven’t had a lost-time accident since inception,” claimed Denver. Five of the seven permanent staff have been at the facility since commissioning. “These guys and gals are all cross-trained through our in-house developed training programs, and we manage our own outages, each GT specialist takes a turn in leading the next outage.”

Making Armstrong Power a black-start-capable station was a sizeable task. The project had an impact on many of the station’s current systems.

The black-start building houses five Caterpillar C175-16 (tier 4) diesel/generator sets (Fig 3). Each unit can produce 3 MW of power at 1800 rpm and all are fed by a 2300-gal diesel storage tank located in the black-start building. A 2500-gal urea tank is used for the CEM (clean emissions module) system. There is a dual-source air compressor and dryer system installed to provide air to the CEM unit. This avoids being tied into the station instrument air system. 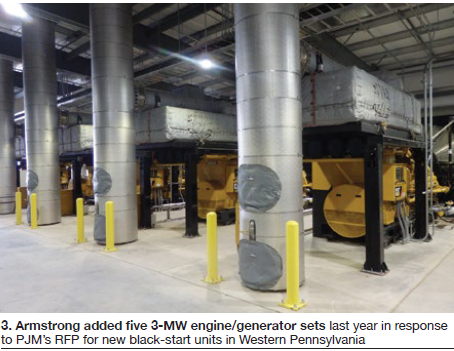 The motor control center houses the 4160-V breakers for all five generator sets and both bus tie breakers. The control room features touchscreen HMI that allows safe operation of the equipment by being separated from the high voltage and noise produced by the diesel/generators.

Addition of the black-start equipment completely changed the electrical operation of the station. Breakers were added to the 4160-V busses to allow for synchronization with the diesel/ generators. Protection schemes for the 4160-V breakers had to be changed to allow for the new emergency mode of operation. Emergency mode enables the selected priority diesel/generators to start and automatically close into the dead 4160-V bus when loss of power to the station is detected on both incoming lines.

Two diesel/generators synchronized to the 4160-V bus can successfully pick up the load of the entire station with all four gas turbines on turning gear. That is important—if the station suffers a power loss when all four gas turbines are generating, the diesels can supply the needed power to safely return the four units to turning gear and allow the rotors to cool correctly.

Construction of the project was managed by GT Specialist Bryan Miller and occurred between December 2014 and May 2015. The majority of the foundation and underground conduit work was conducted during freezing and inclement weather. Progress was maintained by working under a giant inflatable bubble. Extensive excavation was needed for the addition of cable trays, fire protection, and fuel supply lines. The combination of frozen ground and natural limestone slabs made excavation a serious challenge. GRiD