The negative impact of moisture on electrical equipment has been a serious concern since the beginning of the industry. Most senior plant personnel have had experiences with low insulation resistance (IR) and low polarization index (PI) values that have extended an outage.

One example concerned a large outdoor generator alongside a major river in the South. The unit’s rotor was removed in August and on the turbine deck.

A retaining-ring inspection was being conducted to check for the possibility of stress corrosion cracking (SCC). Water was found coming out from under the ID of the retaining rings. The rotor appeared dry and had not been exposed to rain. The root cause was condensation on the rotor surfaces, but primarily water stored in the capillaries formed by the winding components.

Water storage in capillaries is a complicated phenomenon, one studied by a major OEM while investigating SCC of certain retaining-ring steels (sidebar). The findings relating to moisture collection in capillaries are the focus of this article.

The basics of capillary action

Capillary action is not well understood by many power-industry personnel. Without a strong background in related studies, the intuitive explanation of capillary action almost certainly will be guessed wrong. Capillary action occurs because water molecules want to stay close together. The resulting adhesion causes the molecules to be attracted to each other but also to adhere to other substances.

In a small tube, or a set of parallel plates that are sufficiently close together, this adhesion will cause a force on the liquid at the edges and result in a meniscus which turns upward. The surface tension acts to hold the water surface intact. Capillary action occurs when the adhesion to the walls is stronger than the cohesive forces between the liquid molecules. The height to which capillary action will take water is limited by surface tension, the diameter of the tube (or plate spacing), the relative humidity, and fuel viscosity. The same effect occurs with both horizontal and vertical capillaries. 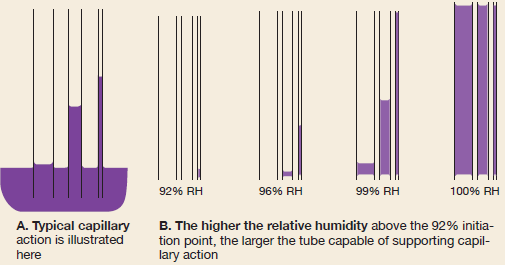 The conditions under which filling occurs are peculiar. With dry air (no humidity) at the end of the capillaries, the tubes contain only air; there is no capillary action. With the humidity increased to the point of moisture condensation, water starts to condense inside the smallest tube. This phenomenon only begins to occur at about 92% relative humidity (RH).

Increase the humidity further and water starts to condense in the next larger tube; meanwhile, the smaller tube has taken on more water. With nearly saturated air at the end of the capillaries, water starts to condense in the largest tube; the smaller tubes have taken on more water. Under saturation conditions, 100% relative humidity, the capillaries continue to fill toward maximum.

Where water collects in rotating machines. Water will accumulate on any surface of the machine if that surface reaches dew-point (100% relative humidity) temperature. Water also will be stored anywhere a capillary exists. On the stator, capillaries would include the spaces between layers of tape on conductor insulation, between conductors and core, and between core laminations. On the rotor, capillaries exist between field winding turns, between turns and ground insulation, between wedges and field body, and in any cracks that may have occurred in the metallic parts.

Preventing moisture accumulation. During generator operation, moisture accumulation normally is not an issue because of the machine’s inherent heat generation and ventilation activity. An example of an exception might be a cooler leak spaying raw water directly onto insulation; however, such exceptions are not considered here.

For air-cooled generators, the challenge is much greater. Many designs incorporate heaters, and if they are functioning, and of sufficient size, moisture accumulation is unlikely. If not, moisture accumulation is likely to occur unless corrective action is taken—for example, forced ventilation with heated air, forced ventilation with dehumidified air, or a combination of both.

When a machine is disassembled and the rotor removed from the stator, preventing the ingress of moisture becomes more complicated. For the stator, on designs where the end covers can be replaced by temporary (plastic sheet or wood) covers, forced ventilation with heated and/or dehumidified air should be adequate.

For the rotor, on high-speed generators—for example, 2-, 4-, or 6-pole machines—an enclosure should be provided. This may be as simple as a temporary plastic sheet enclosure or a more complex transportable enclosure (Figs 1 and 2). In every case where humidity can be controlled using dehumidifiers and/or heaters (and cleanliness assured), it should be done. On low-speed units, such as large hydro-generators, control of humidity (and cleanliness) can be challenging.

Drying wet insulation. Because moisture contamination of insulation has been a major problem on rotating machines, manufacturers typically have provided drying instructions with their service manuals. But a few comments are in order:

Wrap-up. Moisture contamination of insulation systems can have highly negative effects on the insulation. Surface moisture can be removed rather easily, but moisture that has accumulated in capillaries is inherently difficult and time-consuming to remove. In general, it is far better to keep insulation dry than to allow moisture ingress and the need for a costly drying operation.