Much can happen to a powerplant in 111 years, but perhaps more so in the last decade than the previous 10. Empire District Electric Co’s Riverton Power Plant, located in the Southeast corner of Kansas, is one of the oldest continuously operating generating facilities in the country (Fig 1). Its history reflects the broad trends in the industry past and present, but most recently it could be considered “the poster child” for what is happening to coal-based electricity. 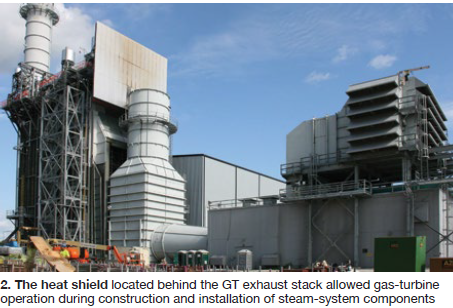 Meanwhile, the last two 1950s-era coal units were retired, the coal handling facilities have been reclaimed, and the coal-unit powerhouse will be demolished. Over the last 10 years, these two units had been retrofitted to first co-fire natural gas, then again to burn 100% natural gas but they were rarely “in the money” for dispatch. Several smaller, older peaking gas turbines at the site are still in service (Fig 5).

What started out more than a century ago as a single hydroelectric generator (sidebar) is now a 100% gas-fired facility. Space freed up from removal of the coal facilities can accommodate a future CC unit.

The justification for the project was straightforward: Repowering was the most economical way to meet the EPA’s new emissions mandates for mercury, sulfur dioxide, and particulates under the Air Toxics (Title V) provision of the Clean Air Act. Thus, it was strictly a coal-to-gas capacity displacement project.

Riverton began life as a 3-MW hydroelectric plant (two 1.5-MW units and eight “waterwheels”) adjacent to the Lowell Dam around 1905. The plant was built to serve the area’s booming zinc and lead mines. In turn, Empire District was formed in 1909 through the merger of several small utility generation and wires companies (and others, such as an ice company) active in the earliest decades of organized electricity service. Typical of the period, these utilities were merged into multiple investment holding companies, which ultimately were integrated into Empire.

Next, a small coal-fired 25-cycle Corliss steam engine named “Old Kate,” used to supply the 1904 St. Louis World’s Fair, was relocated to Riverton. A 2-MW steam turbine was added in 1913 to extract additional energy from the Corliss engine exhaust, an early example of repowering. Six small coal units were added between 1910 and 1925. In 1920, Riverton was reputed to be the largest steam plant in Kansas.

Although today gas has completely displaced coal, use of natural gas actually started at Riverton with the addition of Unit 7, a 38-MW coal/gas unit, in 1950 and a 54-MW coal/gas unit in 1954 (the capacity replaced by the recent repowering project). In 1964, a 12-MW gas turbine was added, and then two 32-MW GT peakers in 1988.

Blake Mertens, VP for energy supply, and Ed Easson, plant manager, credit several things for a relatively smooth commissioning period. Perhaps most importantly, Empire co-owns and operates the State Line Plant (a 2 × 1 CC powered by 501F gas turbines) only a few miles away across the Missouri-Kansas state line. Riverton operators were able to train at State Line and much of what was learned about design and operation was applied at Riverton.

Easson and Mertens proudly noted there were no operator errors which forced the unit offline during commissioning.

Like most CC units these days, Riverton 12 was designed for flexibility in following market demands, and intermittent resource supply, notably wind. “Riverton is uniquely positioned to boost up the wind in the western half of the state,” noted Mertens, “typically we get paid for voltage support at night, and energy during the day.” The plant operated essentially 24/7 during its first three months of commercial operation. “At average natural gas prices of $2.50/million Btu, we’re anticipating the CC will achieve 60% capacity factor,” Mertens said.

The gas turbine is designed and permitted for unlimited starts and operating hours. The GT can put 150 MW on the grid in as little as 6 to 7 minutes, a hot start of the steam cycle can be accomplished in less than two hours. Experience at State Line (and, undoubtedly, the 1 × 1 configuration) has allowed Riverton to staff three operator/technicians per shift rather than four. Total Riverton plant staff is 22.

A 3-MW electric startup boiler provides some warm-up steam for the steam cycle, although it is not sized for full warming during steam cycle roll-ups.

Permitted NOx emission limit is 15 ppm at 15% O2. To achieve this, the HRSG includes an SCR. Initially, NOx level out of the GT was permitted at 25 ppm.

To maximize operating flexibility during the conversion from simple to combined cycle, a heat shield was installed at the GT exhaust, as shown in Fig 2. It allowed the GT to operate simple cycle with the steam cycle under construction.

Mertens and Easson point to the steam-turbine arrangement as an innovative design feature. It is arranged perpendicular to the gas turbine which reportedly reduced the required piping runs and racks; improved heat rate by 40 Btu/kWh; allowed more equipment to be located inside the building, helping with freeze protection; and reduced capital costs by 5%. As the plant is hemmed in by the river and the lake, it also allowed for a compact overall footprint. “It is, literally, right up against the HRSG,” Easson noted, “which did involve some construction challenges.” 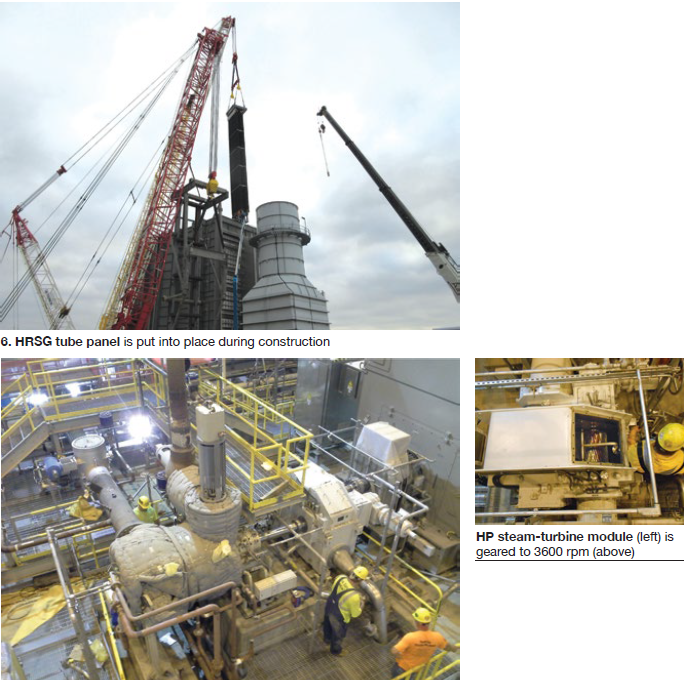 Features of the HRSG (Fig 6) important to the plant include: use of full penetration welds; sizing, routing, and locating suitable drain lines to enhance steam cycle roll-up; use of hangars and floating inlet and outlet headers on tube bundles; and use of high-strength drum and header materials (P91).

The VAX HP steam turbine module operates at 9000 rpm, and is geared to 3600 rpm between the turbine and generator shafts (Fig 7).

In sum, Empire was able to repower Riverton, repurpose the staff (no layoffs were involved and the community’s tax base remains intact), and meet EPA’s mandates, therefore continuing to operate, hopefully for several decades more. GRiD