Paul Tucker called CCJ’s editorial offices a few weeks back with a generator experience to share with users. Say Whaaat? Tucker is well known to engineers and technicians at power and process plants for his ability to identify the root causes of turbine problems.

There isn’t much he hasn’t experienced in his 50 or so years of manufacturing, inspecting, repairing, and upgrading rotors for both steam and gas turbines. A frequent speaker at user-group meetings, Tucker is generous in sharing his extensive knowledge.

This case history is about the planned maintenance outage of a steam-turbine/generator at a paper mill. The work scope included a generator rewind at a third-party shop. “Not surprising,” said Tucker, “seems like generator rotors need rewinding all over the map these days.” The Houston-based consultant suggested to the owner that one of his companies, FIRST Consulting, follow the rotor through the shop to witness various things like balance, runouts, etc—which are basically the same for any rotor, turbine or generator.

Not necessary, he was told. The plant “trusted” the vendor’s work and declined the offer. Shop work complete, the field was returned to the plant and installed in the generator (Fig 1). All seemed well, until a month later when vibration spiked on the Nos. 4 and 5 bearings to more than 0.8 in./sec or about 7.8 mils. The unit wouldn’t run and Tucker was called to assist in finding the root cause of the vibration-induced emergency outage. 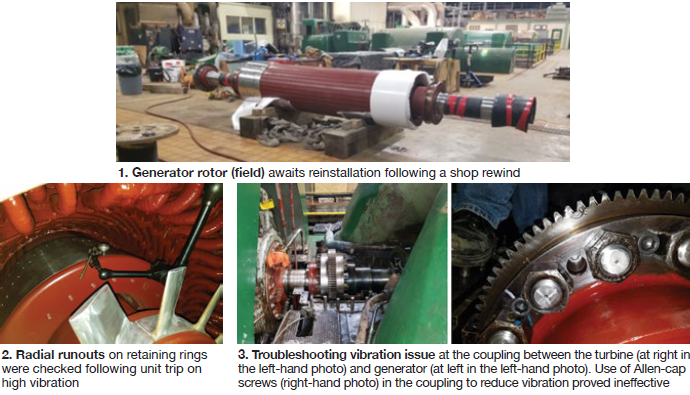 Lesson learned No. 1: TRUST your valued partner (the shop in this case), BUT VERIFY! Audits of procedures and personnel are recommended before any shop work is conducted given the generally high level of turnover in the power industry today. You want to know who is working on your project and what their qualifications are.

After over 40 days of downtime for fact-finding, investigation of everything imaginable, checking and re-checking, FIRST’s Alec Crabb discovered radial runouts of more than 35 mils were recorded on both retaining rings at the repair shop after the rings were reinstalled and before the rotor was high-speed balanced. “The most you ever want to see is about 10 mils,” Tucker said.

The shop high-speed balanced the rotor believing the centrifugal force created at 3600 rpm would straighten the shaft and the radial runouts would return to “normal.” Shop personnel “assumed” the runouts were acceptable; they were never re-measured after balancing.

Thus, the large spike in vibration a month after restart of the overhauled field was caused by the retaining rings “self-straightening” and the shift in weight that accompanied that phenomenon.

FIRST was able to recommend a fix. First step was to access the generator retaining rings, and for Crabb to measure the radial runouts (Fig 2). Both had “corrected” to less than 10 mils. Next step was to add balance weights at each end of the rotor near the retaining rings—opposite to where the weights were added during the high-speed balance.

But it took a while to get to his point because the owner’s field-service company had attempted a balance correction several times by adding weights at the coupling (Fig 3). That never helped to reduce the vibration because the unbalance created by centering/shift in the positions of the retaining rings was far too great.

Months later, the vibration at bearings Nos. 4 and 5 continues to measure less than 3 mils.

The bottom line: Measuring incoming runouts on retaining rings at the shop, as well as after the electrical work has been completed and the rings are reinstalled, is critical to success. If the rings are cocked and there is excessive runout, this should be addressed prior to balance. Tucker told the editors that relying on an at-speed balance to reseat the retaining rings is dangerous and extremely risky. Finally, don’t forget to check the runouts after balancing.

Lesson learned No. 3: Skilled turbine mechanics with deep rotor experience can help resolve generator rotor issues as well. In some cases they may be the optimal choice if shop personnel are focused primarily on the electrical side of the generator. CCJ