Servo valves were developed to precisely control the pressure of oil flowing to hydraulic actuators responsible for transmitting force or torque to open, shut, and/or modulate valves and other equipment. Before servos, human or mechanical means were used to perform such control functions, but they lacked repeatability and flexibility.

In gas-turbine-based powerplants, servos control fuel flow, combustor bypass, compressor bleed valves, NOx control water (or steam), as well as the position of inlet guide vanes and of critical valves on steam turbines in combined-cycle plants. This means they are important to your plant’s performance and safe operation and demand respect despite their small size and seemingly pedestrian function.

Many servo valves operate reliably for five years or more, while the performance of others is compromised by sticking and wear of critical parts. The extremely close tolerances between moving parts—and for critical orifices— that are required for precise control, demand pristine hydraulic fluid and regulation of oil temperature within manufacturer limits. 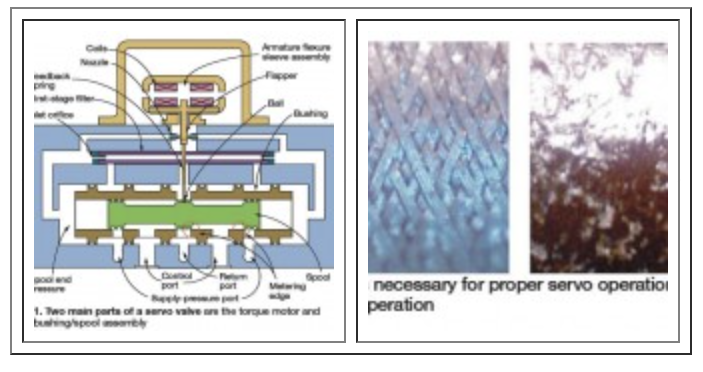 Valve works this way: An electrical input signal induces a magnetic charge in the armature and causes a deflection of the armature and flapper. This assembly pivots about the flexure sleeve and restricts fluid flow through one of the two nozzles shown in the diagram.

Spool motion is transmitted to the ball end of the feedback spring, creating a restoring torque on the armature/ f lapper assembly. Once the restoring torque becomes equal to the torque created by the magnetic forces, the armature/flapper assembly moves back to the neutral position and spool movement stops (fluid pressure on both sides of the spool are in balance)—that is, until the input signal changes.

Two things to take away from the foregoing:

2. Nozzle openings must be “as new” and nozzle/flapper spacing precise to assure proper servo response. Also, sharp metering edges on the bushing/spool assembly are critical for accurate flow. 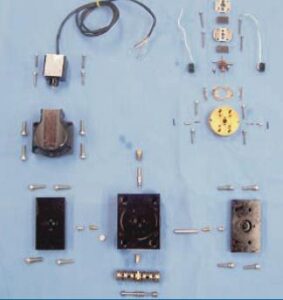 How to maximize servo life, availability

Wear and tear. Morrison, whose firm services and rebuilds hundreds of servos annually, told the 501D5/D5A Users that the company finds varying degrees of damage to these critical valves. Causes of wear and general deterioration include heat, vibration, fluid contamination, electrical erosion, and acid formation in phosphate ester-based hydraulic fluids.

Generally, he said, when heat, contamination, and acid content are controlled to levels less than those specified by the manufacturer, servos show little wear, even over a period of years. Typically, all technicians will find during normal servicing are some contaminants deposited on the filter media (Fig 2) and bushing/ spool assembly.

However, excessive heat and contamination can cause the valve to stick or freeze. Plus, particle bombardment can cause pitting of the bushing/spool and nozzle/flapper assemblies. Large contaminants and/or collections of small particles (so-called silt) can plug the servo filter, nozzles, and orifices. This restricts the control flow through the torque motor, limiting spool end pressure, and causing loss of valve control.

In valves that have been attacked by acid formed in improperly maintained phosphate ester-based fluids, service technicians find erosion of critical metering edges and nozzles. Such damage, which can occur within a few months or less, causes excessive internal leakage and adversely impacts servo response time.

Other wear points that impact servo performance include flapper (Fig 3) and nozzle erosion and wear (Fig 4), and flattening of the ball at the bottom of the feedback spring (Fig 5).

Keeping oil clean. Morrison said that more than three quarters of all servo problems are a direct result of fluid contamination. He added that a high concentration of contaminants forced at high pressure through nozzles increases oil temperature in the valve above that in the sump. Heat is the enemy, Morrison continued, because it contributes to varnishing, which impedes the movement of servo parts.

Removal of particulates can be accomplished with return-line filtration or an off-line filter system. If you are having difficult keeping contaminants out of your hydraulic oil, consider upgrading the filtration system. Remember that this is your first line of defense against valve problems.

Servos are equipped “last-chance” filters, which typically are made of wire mesh and built into the body of the valve in the pilot-stage supply line. Do not rely on this filter to clean your hydraulic oil system; its purpose is to protect internal valve parts in case the primary filtration system fails. Loss of valve response is one symptom of excessive contaminant loading in the servo filter. Others include jerky motion and high null bias—that is, a high input current is required to maintain the hydraulic cylinder operated by the servo stationary. If irregular operation requires frequent replacement of the servo filter, check for problems with your system filter.

An interesting fact presented by Morrison was that the small filter incorporated into a typical servo installed on a large frame machine may process 100,000 gal/yr of oil. Thus, even a low concentration of contaminants can adversely impact valve operation.

Predictive maintenance. Savvy plant managers know that a prerequisite for completing an outage on time and within budget involves careful planning of all the work required. Valuable information on the condition of servos can be gathered by diagnostic testing in advance of planning meetings. Outside services available to plants include:

Plant staff, if properly trained and equipped, can do some or all of the foregoing diagnostic work. Handheld test instruments—at least one for under $500—are available to verify proper valve operation prior to startup, check null bias, etc. CCJ OH

United Servo’s Gary Morrison shared with the 501D5/ D5A Users the company’s maintenance recommendations for hydraulic systems. By following this six-step program, plant personnel can avoid many nagging problems that have been experienced with servos.

4. Servos and other valves

5. Consolidate system services with one vendor