The value of user groups continues to grow in the electric power industry as the number of employees on the deck plates shrinks and personnel with deep experience retire.

The plant manager for a 2 × 1 J-class combined cycle under construction told the editors he had received more than 500 resumes in the last two months for about 20 hourly positions at the facility. Two-dozen employees is the total headcount planned. Given that most candidates are not familiar with this gas turbine—only a handful of J engines are operating worldwide and the US fleet leader had less than a year of service time in February 2018—training time likely will focus on the GT because it is the revenue resource. Certainly would make sense.

What about the other equipment? Who is the subject matter expert (SME) on steam-turbine valve actuators, for example? Anyone? Not likely. The editors picked this for illustrative purposes because their Rankine Cycle experience comes from the nuclear and coal-fired plants home to large, hydraulically actuated steam valves and big staffs with SMEs for virtually every piece of equipment.

Before the Steam Turbine Users Group was launched in 2013, the major gas-turbine users groups may have dedicated half a day to steamers. STUG enabled owner/operators to drill down on important steam-turbine (ST) topics, like actuators, that weren’t covered previously because of time constraints (Fig 1).

Actuator inspection and overhaul was on the agenda for STUG 2016 and then again in 2017. If you’re a neophyte and don’t understand why this subject would be discussed two years in a row, by the same company (MD&A), you ask someone on the steering committee.

Here’s what the editors were told by a committee member with decades of GE steamer experience: Back in the days of “big steam,” he said, GE, the dominant turbine supplier, made its own actuators, which might have run for 30 years with little or no maintenance. In the combined-cycle era, Bosch Rexroth AG has supplied the majority of actuators for large steam valves and those must be overhauled every five to eight years.

Some actuator designs have specific issues that require close attention. For example, Rexroth actuators for Toshiba steam turbines are very large and oriented horizontally creating wear points that might not be found in the vertically mounted actuators on GE machines.

In the mind of this committee member, at least, actuators for turbine valves may be the most important “forgotten” component in a steam plant. Many problems, he said, can be traced to water ingress and maintenance inexperience. At his company, in-service failures and numerous servo and solenoid issues that had occurred when station O&M personnel were charged with maintaining actuators in-house have been avoided by contracting the work to a specialty shop.

But, the turbine expert cautioned that there are no guarantees when it comes to actuator reliability. Inspection and soft-parts replacement, which typically are scheduled during steam-turbine minor inspections, are done at intervals of about five years—a long time given the wear and tear traced to today’s demanding cycling requirements.

Because you don’t know exactly what you’ll find when an actuator is dismantled for inspection, be sure the overhaul partner you select can assure the ready availability of parts—unless you have a back-up set of actuators, as some owners do. Scuttlebutt suggests that getting parts from Rexroth, a German company, can be challenging. However, most users are likely to agree that Rexroth has the best actuator on the market today for steam valves.

To learn more about what owner/operators can do to minimize actuator issues, the editors spoke with MD&A’s Anthony Catanese, an engineer on the front lines of the company’s Ohio overhaul shop and the SME invited to speak at STUG 2017.

Actuator performance and lifecycle are influenced most by the cleanliness of the hydraulic fluid and your ability to restrict water ingress, Catanese said. Varnish presents a double whammy: It can plug the 4- and 10-micron filters for the servos, the actuator’s “brain.” Plus, it can combine with oxidation products produced during the degradation of the hydraulic fluid to form rust (Fig 2) and varnish (Figs 3 and 4) that inhibits actuator operation and may reduce spring life. 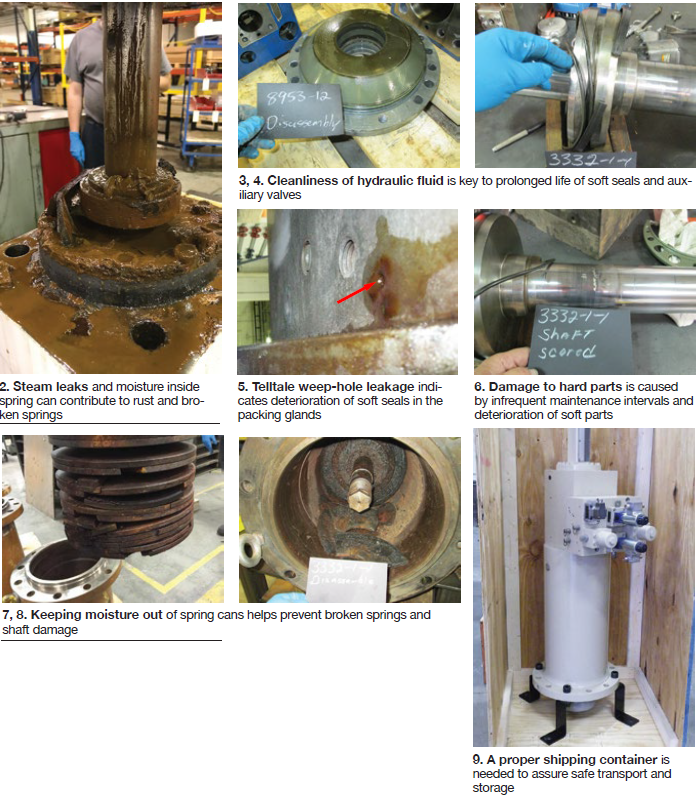 Given the importance of actuators and how easy they can be to forget in the daily crush of plant activity, consider assigning responsibility for them to one person in the O&M department. There’s not that much to do except keep after the few recommended activities for relatively few valves—eight in the case of a GE D11, an integral part of the OEM’s 2 × 1 and 3 × 1 combined cycles. Those plants typically are equipped with two each stop, intercept, control, and reheat valves.

Rexroth recommends the following for each valve:

When scheduling D11 overhauls, Catanese notes that some customers have opted to inspect and refurbish two valves every year to level both cost and outage time on an annual basis. Most often only about a week or two of scheduled shop time is required for the basic “open/clean/close” process and replacement of soft parts for a full set of eight actuators. An incoming inspection report with shop recommendations is generated shortly after actuator receipt. Plant personnel are invited to verify the report’s findings, discuss the recommendations, and witness testing after work is complete.

Of course, the technician assigned responsibility for actuators should be looking at them periodically when out in the plant. One of the first signs of concern often is leakage out of the packing-gland telltale weep hole (Fig 5). If borescope examination of the spring reveals moisture or rust, maintenance should be scheduled soon.

Moisture causes rust which can cause broken springs which, in turn, score the shaft (Fig 6) and promote increased leakage. Plus, moisture can accumulate and contribute to the failure of springs on vertically mounted actuators (Figs 7 and 8). As a stop-gap measure, consider removing a breather vent and using dry shop air to pressurize the actuator, thereby preventing water/steam accumulation in the spring can.

Given the problems with varnish and moisture ingress that can arise over an actuator’s lifetime, it makes sense to spend time at the design stage to select the optimal hydraulic fluid for the service. If problems arise in service, give thought to replacing the fluid with one better suited to your application.

Listed below are the three most popular hydraulic fluids for actuators operating large steam valves. All are fire-resistant. Comments are culled from notes taken by the editors at user-group meetings.

Finally, when your actuators leave the shop, be sure they are properly crated for shipment and possible long-term storage and secured in an upright position (Fig 9). CCJ