Challenge. The control system supplied by OEM Pratt & Whitney for the two FT8 TwinPacs at Iberdrola Renewables’ Klamath Cogeneration Plant was experiencing obsolescence issues and required a software upgrade. It had become cumbersome to use with poor graphics, poor trending functions, and a closed architecture. This made troubleshooting difficult and delayed the identification and correction of problems. Additionally, changes to facility operation required OEM input and approval, limiting the plant’s ability to understand exactly how the peaking units were designed to run and how to make operational improvements.

Solution. Once the warranty period was completed, being tied to the OEM for approval of plant changes became cumbersome, costly, and unacceptable. New power purchase contracts required improvements in engine starting and operating reliability. A cost/benefit analysis suggested a control-system upgrade. Three options were considered:

• An HMI software upgrade by P&W. It included new server machines and software but maintained the remaining hardware and still had closed-code architecture.

• A completely new OEM system that replaced hardware and software, but again with closed architecture.

• An entirely new, standalone DCS system with an open-code architecture offered by ABB. The major risk associated with this option was that, to the plant’s knowledge, this had never been attempted by anyone.

The Klamath plant site includes a combined cycle with an ABB Bailey DCS control system (Figs 1, 2). Installing an ABB DCS would seamlessly integrate the two facilities. Ultimately, the ABB DCS was the option selected. Klamath had a very good relationship with ABB and all parties involved recognized the challenges of retrieving the necessary logic to recreate it in the new control system. 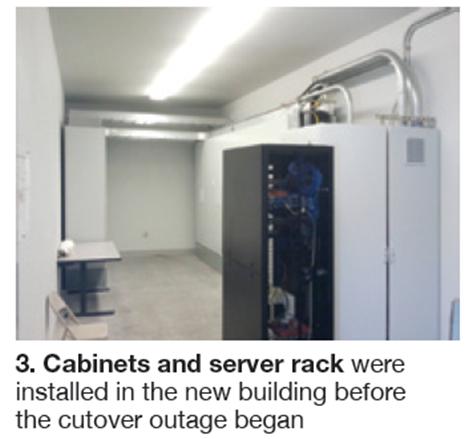 Without the ability to see the logic in action, or a trending function to view system performance, creativity was required for data-gathering. One method used was to set a video camera in front of the HMI and record starts, stops, and load changes. From these videos, engineers were able to recreate the actions of the controls.Some critical system logic had to be developed with the ability to see the existing logic, such as: (1) IGV/VSV and fuel valve curves, (2) surge protection, (3) cold air buffer logic, (4) thrust-balance valve control, (5) evaporative-cooler controls, and (6) ammonia and SCR control scheme.

Specific log sheets were developed for the operations department to fill out during plant runs when no engineering was available. Plus, instrumentation and metering was set up in the field to monitor changes in signals that were not viewable from the controls. Watch Windows software also was used to provide necessary balance-of-plant (BOP) data.

While data were being collected, the cabinet layout was designed and cable runs were considered. Plus, an addition to the control building was planned for these reasons:

• To reduce the time required for the cutover outage. The ability to have the cabinets in place, cable trays installed, wire pulled, and a desk with layout space contributed to this goal (Fig 3).

• To allow the operator to control the plant from a desk-mounted HMI located at a safe distance from the arc-flash potential of the Pratt & Whitney control cabinet (Fig 4). The existing cabinet had the HMI directly in front of the 13.8-kV generator breaker. All TwinPac control cabinets supplied by Pratt & Whitney place the operator inside the arc-flash zone, presenting a serious hazard during operation of the generator breaker.

The option of having ABB provide a pre-manufactured building was evaluated. A cost/benefit analysis proved it was less expensive to construct a building with local contractors than to purchase, transport, and install a pre-fab unit (Fig 5). Plant staff contributed to the cost saving by doing the electrical install, including NERC-required cameras and badge readers. 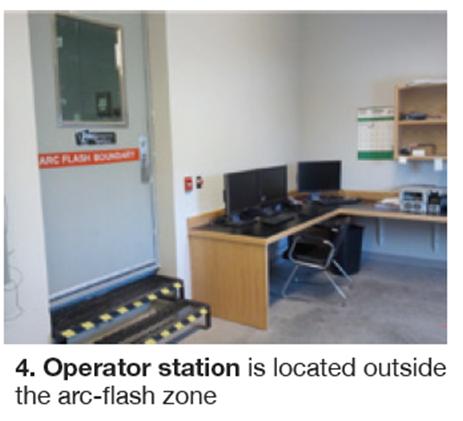 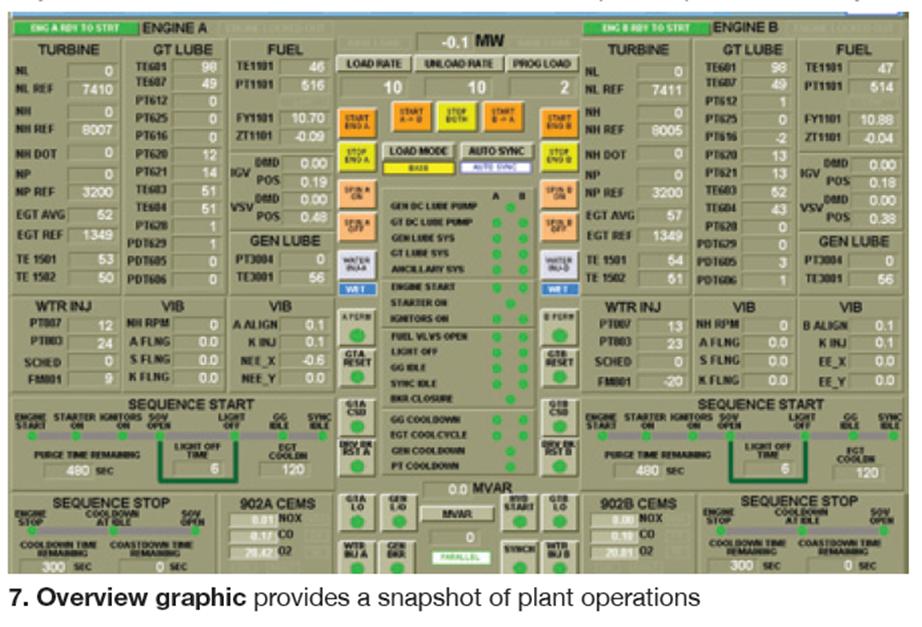 Another major upgrade permitted by the control-system change-out was replacement of the thrust-balance valve actuator. The original actuator was pulse-activated and only had limit switches to indicate “open” or “shut.” A new EIM actuator with full-range feedback was installed (Fig 6). The controls project also allowed engineers to create a standard PID loop for more accurate control.Additionally, the purpose-built structure is larger than any building that would be capable of over-the-road transport. The larger floor plan accommodated engineers and the drawings required in support of the commissioning effort. This space is now used for storage.

• Open architecture and access to system knowledge provide technicians an intimate understanding of every system in the plant and give them the ability to modify logic and make plant improvements.

• The ability to tune the engines, make BOP changes, and modify graphics to aid in operations now resides at Klamath (Fig 7).

• Link-up of the new control system with the PI historian provides the ability to store and retrieve data for troubleshooting and performance enhancements.

• Alarm set points can be modified, along with the nomenclature of the alarm, to better assist operators in diagnosing problems.