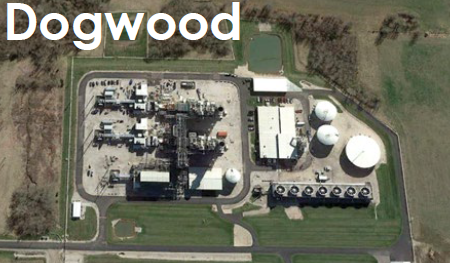 Challenge. Many powerplants find it necessary to bring in rental generators outage after outage to ensure that all the work gets done. They pay a lot to rent light stands with built-in generators, so the work can continue through the night; plus, welding machines with built-in generators placed strategically throughout the plant. With this equipment comes the additional cost of monitoring, maintaining, repairing, and fueling it.

This need arose at Dogwood in fall 2016, when staff faced the largest outage to date in the plant’s 15 years of operation. Dogwood previously had sustained two major gas-turbine outages in 2009, along with outages on the LP steam turbine and the ST generator. In 2014, we had to rewind on one of the GT generators, and make piping and valve repairs that required post-weld heat treatment (PWHT) support.

Staff had to get creative, running power from spare breakers to some of the equipment and powering the rest with rental generators. This required the full attention of our two-man electrical crew and several contract electricians to configure the power supply and cabling to various jobs.

A large chunk of our budget went for a generator that was brought in on a flatbed 18-wheeler to run the air conditioning unit and desiccant dryer (Fig 1). Refueling this behemoth required outside support from a local fuel co-op, with the attendant safety concerns of transporting and offloading highly flammable fuels.

Following this outage in 2016, we were scheduled for another generator rewind, this time on our second unit. We also needed to perform a hot-gas-path inspection on the same unit, as well as a full-train steam-turbine outage (HP, IP, LP, generator, and exciter) plus several weld jobs and some grinding, cutting, and heat treatment. All of these tasks required auxiliary electrical service support.

Solution. Rather than continue paying local rental shops for use of their generators, we decided to upgrade our electrical infrastructure, which had often required supplemental power even for small outages. Our primary source for auxiliary power was existing power packs that would plug into a 480-V, 60-amp welding receptacle, of which we had 10 that had been installed as original equipment throughout the plant (Fig 2). These power packs included 18 120-V circuits, two 480-V circuits, and a 480-V/120-V stepdown transformer. 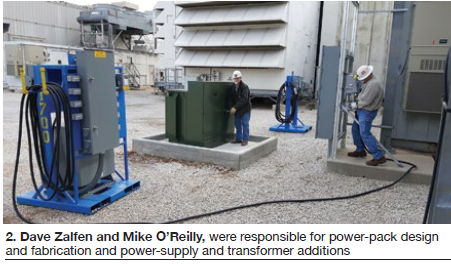 In sum, Dogwood made the following substantial permanent power supply upgrades in 2016:

This ended up being a fairly large project with a lot of moving parts, especially the addition of the oil-filled transformer. The transformer required excavation for an underground conduit and concrete containment as well as the consideration of the protective relay. We had our existing infrastructure evaluated to ensure it could handle the eight additional welding receptacles and surveyed the plant overall to assess where power sources were lacking and where a likely need would occur.

Results. On project completion we noticed some obvious and immediate benefits. First and foremost, we now enjoyed plenty of power availability throughout the plant. During the fall outage, Dogwood did not have to rent a single generator for additional power support. In addition, we were able to eliminate the large flatbed generator with its substantial footprint, which not only eased our budget but freed up space for better traffic flow and for equipment needed to support other projects.

Last but not least, we no longer required plant personnel to monitor or refuel the generating equipment. This was no small issue: when we did our first generator rewind, we had to have the flatbed generator refueled almost daily, which required coordination and scheduling to refill the plant’s 500-gal fuel tank every third or fourth day—including weekends. All of our needs for additional fuel support were virtually eliminated.

This was a large and expensive undertaking. We would not recommend it to plant that foresees only small outages for the near future. However, the upgrade saved Dogwood approximately $45,000 in equipment rental, fuel and fuel surcharges, onsite electrical support, and contract electrical support for this major outage.

Eventually, almost every powerplant will have to perform major outages for combustion and steam turbines as well as generator rewinds. That could be three years down the road, possibly five, maybe even 10. But when you do your long-term planning, we suggest you factor in all of your rental generator needs and bounce those off of what your existing infrastructure can support.

You may find that reducing your immediate and future outage costs, reducing liquid-fuel costs, and the safety concerns in handling that fuel would offset the cost of an upgrade. And there’s also the benefit of clearing away all of that rental equipment footprint, making for a cleaner work zone at the same time you’re increasing the available power supply and trimming labor-hours.