In California, it seems, the objectives with new supply capacity have to do with molecules and minutes—that is, minimizing “molecules” of NOx emissions under all load and dispatch scenarios and shaving minutes off of dispatch response times. For the City of Pasadena Water & Power Dept, add a third objective: Addressing a long-standing reliability issue. 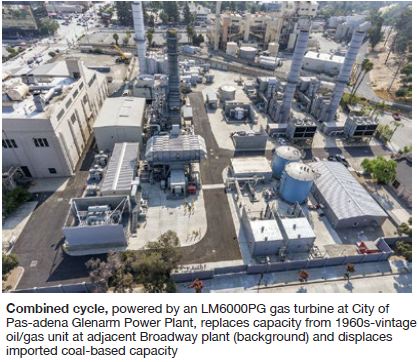 At the end of last year, the municipal utility replaced a 1965-vintage oil/gas “teakettle” boiler/steam turbine unit at its Broadway Power Plant with a new 71-MW combined cycle (named GT-5) at the adjacent Glenarm Power Plant. Anchored by a GE LM6000PG SPRINT gas turbine/generator, GT-5 includes an Innovative Steam Technologies (IST) once-through steam generator (OTSG) and Shin Nippon Machinery Co steam turbine/generator. The combined-cycle steam-side output was sized for an equivalent capacity replacement such that the existing emissions permit could be transferred. The old unit has since been decommissioned.

Like so many other owner/operators in the state, Pasadena needed faster response to dispatch signals, while avoiding the inefficiencies and emissions inherent in pressing old metal into service for current-day requirements. According to Plant Manager Arturo Silva, the facility might keep the old unit warm with a fire in the boiler for days so that its output could be available within an eight-hour startup sequence. Then the unit might operate at a load point between 20 and 71 MW, depending on what the California ISO called for and what the city needed internally.

The city’s peak load is around 320 MW. While the utility has a 282-MW import capability, it comes from two lines connected with the Southern California Edison (SCE) system. However, both of those lines enter Pasadena’s grid at the same point. In other words, there are three transformers, two transmission lines, but only one substation, one entry point for purchased power.

This created a reliability issue the city lived with for years. While the new unit doesn’t remove this reliability constraint, it enhances overall system reliability for the utility by providing a generation resource within the city. In addition, it replaces 35 MW of purchased power sourced from a distant coal-fired facility.

The new combined cycle reduces risk on several levels. First, it provides 71 MW from a state-of-the-art unit, rather than one that has seen more than five decades of service. Second, the 53 MW from the LM6000 can be online within 10 minutes and the full combined-cycle output within two hours (Sidebar), greatly enhancing the utility’s ability to respond to CAISO dispatch signals, balance purchased power with its own supply, and substitute for purchased power under adverse or emergency conditions.

This is welcome flexibility especially since CAISO tends to either keep the unit at around 19 MW or frequently moves the load up or down, notes Silva. The unit typically experiences at least one start per day, and remains online for six hours, two hours in simple cycle, four hours with the steam cycle.

Early O&M challenges. Silva and the utility are “really happy” with the new unit. “It has come a long way towards alleviating our reliability issue,” he said. Two persistent O&M challenges are dissolved O2 in the steam cycle during startup and meeting NOx emissions limits in both simple- and combined-cycle modes.

According to Silva, the water chemistry for the OTSG is extremely sensitive and the unit is above its dissolved O2 limits until making steam, which then allows the condenser to most effectively remove oxygen. The plant plans to add a 3M LiquiCel membrane contactor for removing dissolved gases from liquid streams. According to 3M website info, this technology is replacing O2 scavengers, forced-draft deaerators, and vacuum towers for removing O2.

However, stack emissions still can be a challenge, says Dave Tateosian of Clean Power Consulting Partners, Martinez, Calif, when the unit is subjected to frequent significant load changes in response to CAISO dispatch orders, or is operating at low loads (down to 25%) when the mass flow through the OTSG is reduced, slowing its response to emissions changes. Tateosian served as the GT-5 project manager and commissioning manager for the final six months of the project.

Undoubtedly, Glenarm and Broadway’s neighbors will breathe easier. The Glenarm and Broadway plants are an island of power generation within Pasadena, bisected by the Los Angeles County Metropolitan Transportation Authority’s light rail tracks, and surrounded by built-out suburban and commercial neighborhoods and a high-end residential district that sits on a hill overlooking the plant.

The Glenarm powerplant dates back to 1906, exemplified by the historic building (now a city-designated historic monument), at the left in the photo. The original boilers, steam turbines, and condensers are still there, along with tiled walls, wrought-iron railings, etc—a monument to the days when generating stations were viewed as a sign of progress and held in high esteem.

Dave Tateosian, principal, Clean Power Consulting Partners, Martinez, Calif, respected for his decades of engineering experience on West Coast power projects, talked to the editors about the advantages in operational flexibility offered by aero-based combined cycles equipped with a once-through steam generator like the GT-5 project for Pasadena Water & Power Dept described in the main text.

In sum, he said, a 1 × 1 aero-powered combined cycle with an OTSG can offer the starting time and output of a simple-cycle unit with the full efficiency of a CC within a couple of hours. Here are some of the takeaways from the conversation: