The use of acoustic monitoring to detect tube leaks in steam generators is not new. The technology has been applied successfully for years in boilers serving conventional steam plants, as well as in recovery boilers for the pulp-and-paper industry and in feedwater heaters. Now, thanks to what EPRI calls a “tailored collaboration project” involving the research organization, Dynegy Inc’s Ontelaunee Energy Center, and Mistras/Triple 5 Industries, acoustic monitoring has been adapted for use in some heat-recovery steam generators.

Application of acoustic technology to HRSGs has been slow to develop, said EPRI’s Project Manager Bill Carson, a former plant executive, given their uniqueness of design and, until recently, a service paradigm often characterized by relatively few operating hours and starts. Background noise from gas combustion, turbulent flow of gas-turbine exhaust gas, and the high temperature of the inner liner contributed to the reluctance of plant personnel to embrace acoustic technology. But, as HRSGs have aged and accumulated operating hours and cycles, tube leaks have become a concern and interest has grown in identifying a better method of detection.

The value proposition for HRSG owner/operators is detection and location of leaks early enough, in general, to avoid forced outages by enabling operating decisions that slow the progression of damage and allow more flexible scheduling of repairs. Heretofore, plant O&M personnel were forced to rely on such lagging leak indicators as steam in the stack plume, wet spots at the bottom of the HRSG, high rate of makeup flow, high levels of moisture in CEMS samples, etc.

In simple terms, acoustic monitoring of a boiler involves continuous measurement of sounds from within the unit, signaling an alarm when the sounds of interest exceed a preset threshold for a predetermined amount of time. Mistras/Triple 5 provided the acoustic monitoring system (AMS™) used in the Ontelaunee demonstration. Acoustic sensors were installed near areas of historic leak concerns—specifically, reheater and superheater tube-to-header joints. The sensors were connected to dual-frequency-band amplifiers (Figs 1, 2) and the signals routed from the amplifiers to data loggers for trending. 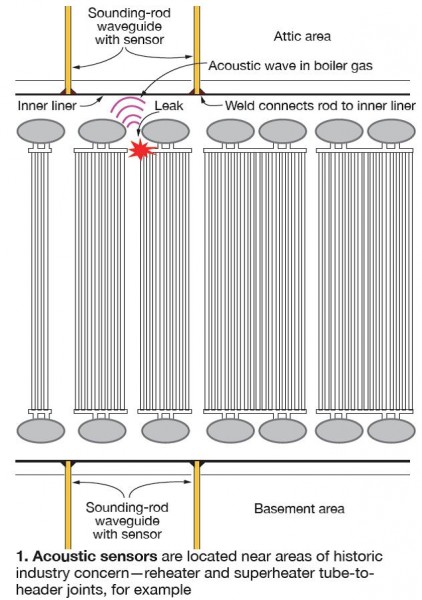 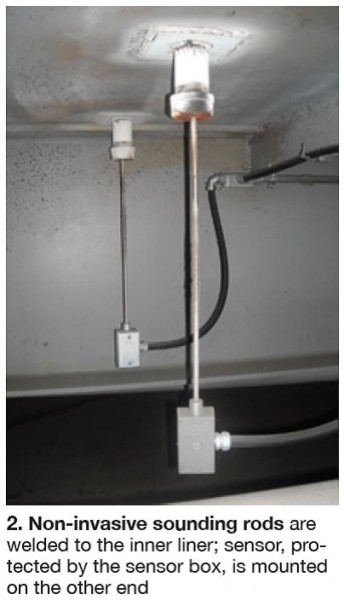 The AMS was installed on Ontelaunee’s Unit 2 HRSG for the demonstration project because its operating history suggested it was more susceptible to tube leaks than the Unit 1 boiler. Unit 2 had experienced a tube leak before the AMS was installed. To date, the diagnostic system has detected five tube leaks (the fifth after the demonstration program ended)—all in reheater and superheater panels (harps) close to where the affected tubes enter the upper headers.

Tom Buelter, director of engineering for Dynegy in the Midwest, and Ontelaunee’s Production Manager John Goodman and Plant Engineer Phyllis Gassert, told the editors that the AMS system was successful in identifying leaks earlier than other methods used previously, thereby allowing plant management to avoid the technical and economic consequences of tube failures that some others have experienced.

Acoustic monitoring was not new to Dynegy engineers, the company having years of AMS experience on its coal-fired boilers. After tube leaks forced several HRSG shutdowns, the opportunity to participate in the EPRI program was viewed positively. Plant-level goals included identifying the optimal location for the acoustic rods and developing the sound profile for the unit with respect to load. Knowing the unit’s healthy acoustic signature is a prerequisite for leak identification.

The value of acoustic monitoring is evident by comparing the acoustic profiles of two tube leaks experienced on Ontelaunee Unit 2 after the AMS was installed. Figs 3 and 4 profile the so-called Superheater Leak 1, which resulted in the catastrophic failure shown in the photo. The chart points to crack initiation with an uptick in signal level on Channel 12A on July 3. Crack progression is indicated by a small-step increase on Channels 9A, 10A, 11A, and 12A 10 days later.

Superheater Leak 2 was identified by the gradual increase in signal level on August 18 as shown in Fig 5. With the experience from Superheater Leak 1 fresh in their minds, Dynegy’s marketing and generation teams collaborated on an operations plan that kept the unit running at low load in the evening rather than shutting it down. This enabled the HRSG to operate until October 1 with a crack that went halfway around the tube (Fig 6). This crack was not identified by any other means during the six weeks of operation prior to the maintenance shutdown.First detection of the leak by an alternative means came on July 17, when a technician noted increased moisture in CEMS (continuous emissions monitoring system) results. The step increase in signal level on July 25 revealed that the crack had propagated to complete failure. Important to note was that the unit continued to cycle after the tube crack was first identified; it took fewer than two dozen starts to go from crack initiation to tube separation.

How AMS works. Pam Grigas, GM of Mistras Group’s Triple 5 Products & Systems Div, explained how acoustic monitoring works. She said that tube leaks create noise that travels through the hot gas passing through the HRSG until it “hits” the inner liner. This noise causes the inner liner, sounding rod, and sensor to vibrate. The sensor converts vibration to electrical energy, which is trended and alarmed in the monitoring system. Sensors are effective in identifying leaks within a circular area having a radius of from 20 to 30 ft. Signal amplifiers used in the Triple 5 system can accept inputs from two sensors, minimizing cable runs.When a third tube leak was identified by AMS in December 2011, marketing and operations again collaborated on a plan to minimize starts and stops. This time, HRSG 2 remained in service until a planned outage at the end of April 2012.

A 12-sensor system such as that at Onetlaunee can be installed in about a week—with sounding rods possibly welded in place during a long-weekend outage. The number of sensors required depends on boiler design. Note that installation requires access to the roof and basement areas because the sounding rods must be welded to the cold side of the inner liner as shown in the first two figures. I&C hook-ups and tuning can be done later, when the unit is back in operation.

For budgeting purposes, figure the cost to equip and install on one F-class HRSG an eight-sensor acoustic monitoring system typically would be in the low six figures; two units would be less than double the cost of one because the electronics cabinet can serve both.

Grigas said AMS is installed on over 300 power boilers—the first, 25 years ago—and on eight HRSGs at three plants. These installations are in addition to the more than 400 systems on feedwater heaters and recovery boilers. AMS’s effectiveness is validated by the more than 700 confirmed leaks identified since the beginning of 2005. Grigas told the editors that there have been very few “missed” leaks reported over the last five years—perhaps a dozen at most.

In keeping with today’s trend to outsourcing of M&D (monitoring and diagnostic) services, Mistras/Triple 5 has more than 200 boilers under surveillance contracts. The company’s database of leak histories enables its technicians identify and access indications quickly and accurately, Grigas said.

For more information on the EPRI-sponsored leak-detection project at Ontelaunee and possible follow-on work to study the acoustic baseline response to duct-burner operation and to correlate load cycles and time-to-leak propagation, contact Program Manager Carson at bcarson@epri.com. The Ontelaunee results are described in “Early Tube Leak Detection in a HRSG Application Using Acoustic Monitoring Technology” (1026653).