Challenge. Nesharim’s filter house is installed over its gas turbines and doubles as a roof for the units. The upper portion of the sheet-metal structure is exposed to the sun’s radiation. An electric chiller is used to cool turbine inlet air to 46F the entire year. In summer, solar radiation heats up the filter house to more than 130F, resulting in a loss of cooling energy and a loss of power produced by the turbines.

Solution. A nano-ceramic insulation—in effect, a 0.2-in.-thick coating of “paint”— was applied as a fine layer on top of the cooling area, on the entire upper surface and side walls. By insulating surfaces exposed to the sun’s radiation, less energy is required for cooling inlet air, and air that has been cooled is not reheated by the sun. This fix has increased power generation and reduced parasitic power consumption. Thus turbine efficiency has increased. 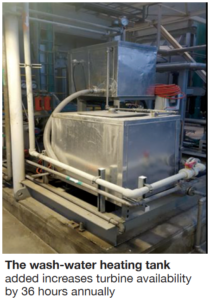 Challenge. Compressors are water-washed monthly as part of the plant’s gas-turbine maintenance program and to maintain maximum output. During the offline wash there is a loss in production time of about eight hours, reducing turbine availability by about 1%. The water-wash process involves eight washes of water together with detergent. During the first two wash cycles, the fluid is heated to about 165F. The plant was commissioned with only one wash-water tank, so it took time to warm the water for the second hot wash.

Solution. Plant duplicated the original wash-water tank and added the second tank in series with the first (photo). With this improvement, heating is carried out in the two tanks simultaneously, thereby saving a few hours. In addition, the OEM’s software was modified to shorten ineffective processes, which saved more time.

Results. This improvement has reduced the offline water-wash time by about half, allowing a faster return to production. The second tank heats the water for the second cycle before and during the first cycle, enabling the second rinse cycle to begin just a few minutes after the first rinse ends. Previously there was a waiting period of two and a half hours. The benefits: