The relentless drive for performance enhancement 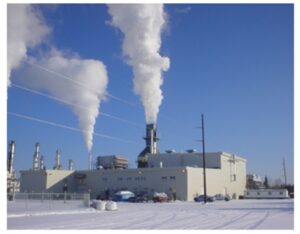 Challenge. Plant engineer Paul Park was developing operating procedures for training purposes when he discovered that a 250-hp backup boiler-feed pump was drawing one-third of its full-load amps while offline. I&E Supervisor Ian Strang and his team of electricians—including Steve Wengelewski, Nate Callis, and Jay Adams—verified that the 480-V, variable-frequency drive (VFD) was drawing 55 amps in motor-off/standby status. Further investigation found that the harmonic filter installed with the VFD was source of that load (Fig 14).

Solution. Plant I&E personnel were challenged to eliminate electrical consumption by the standby pump. Logic drawings provided by the VFD OEM for the drive, inverter, and harmonic-filter installation were studied. A normally open relay installed in the inverter contactor circuit was proposed as a means for de-energizing the harmonic filter in standby operation.

The OEM approved the change and plant I&E personnel performed the relay installation and programming revisions in the plant control system (Fig 15). Now, when a pump start is commanded by the plant control system (PCS), the new relay is closed and powers up the inverter/harmonic filter, a 1-sec timer activates, and the VFD is started. A local bypass was installed around the new relay so the inverter/harmonic filter can be energized in manual if required (Fig 16).

Results. This simple retrofit saves more than 11 MWh/month in plant electrical use and represents an electrical energy saving for the facility of nearly 1%. Total cost of the project was approximately $3000 including parts.

This remote combined cycle burns naphtha from a nearby refinery as its primary fuel, making wasted therms quite expensive. As employees and co-op members, we are proud of reducing plant energy use by 15 homes worth of power per month with this upgrade. 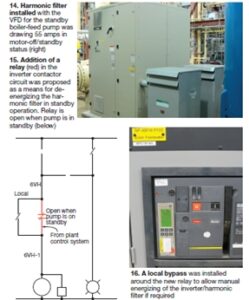