Natural-gas fuel composition has considerable influence on gas-turbine emissions and operability. This might not have been a concern to you previously, but the possible impacts on your engines of increasing reliance on non-traditional pipeline gas—in particular, shale gas, but also LNG, and byproduct fuels from industrial processes—suggests you might want to read on.

Even if you have “good gas,” be aware that the negative impacts of gas-constituent variability can be magnified by the high firing temperatures of today’s most advanced gas turbines. Reason is that these machines must “work harder” to achieve low-NOx emissions and thus have fewer “knobs” to mitigate fuel-composition impacts.

The Wobbe and Modified Wobbe indices are two standard properties used in practice to determine the effects of fuel variability. But they only indicate the changes in heating value and usually cannot describe how changing fuel composition will affect emissions and some potentially damaging operability issues.

Aside from NOx and CO emissions, there are four operability issues of importance to plant personnel. They are:

These four issues, which Turbine Logic routinely observes when performing root cause analyses, pose risks to gas turbines and are closely tied to operating conditions and fuel composition.

Before discussing the impacts of fuel variability on gas turbines, it is important to understand the composition of natural gas, which in North America typically contains 85% or more of methane. The next most common constituent is ethane at about 7% or less, followed by propane at about 1.5% or less. Other components include other higher hydrocarbons, nitrogen, carbon dioxide, and hydrogen. From an operability point of view, it is convenient to divide the fuel constituents into three buckets: higher hydrocarbons, hydrogen, and diluents.

As previously mentioned, the Wobbe Index and Modified Wobbe Index both describe the effect of fuel composition on fuel heating value, with the Modified Wobbe Index also accounting for fuel temperature. In addition to Wobbe Index recommendations, OEMs typically include a fuel specification for their gas turbines on levels of higher hydrocarbons and hydrogen. By operating within these recommendations, operators generally can avoid some of the operational issues mentioned earlier. However, the combustion-dynamics issue is particularly sensitive and difficult and is an issue that must be actively monitored and managed by operators.

There is a relationship between some of these operability issues and Wobbe Index—for example, higher ethane and propane contents in fuel leads to a higher fuel heating value, which also increases autoignition risks. Nonetheless, two fuels with the same Wobbe can have substantially different blowout, flashback, combustion-dynamics, and autoignition tendencies. Thus, Wobbe Index alone cannot be used to ensure safe, reliable operation.

Effects of fuel composition on operability

The operability concerns described below apply mostly to dry-low-NOx/dry-low-emissions/ultra-low-emissions (DLN/DLE/ULN) systems. They are much more prone to these issues than diffusion systems—most notably combustion dynamics, which are a product of combustor design and the effort to keep NOx emissions as low as possible. Diffusion systems do experience some dynamics issues near blowout, but they can be avoided by operating with a sufficient blowout margin.

Blowout. One of the biggest factors impacting flame blowout—also known as blowoff or lean blowout (LBO)—is the flame speed of the different fuel mixtures. Flame speed is the speed at which the flame moves through the reactants during combustion. Hydrogen addition has particularly significant impacts on increasing blowout margin because of its much higher flame speed than methane.

Propane and ethane also have higher flame speeds, but the effect is much less significant than hydrogen. By contrast, diluents (particularly CO2) reduce blowout margins as they act to reduce the fuel’s flame speed.

Flashback. As previously mentioned, the presence of hydrogen and higher hydrocarbons can move a flame upstream into premixing passages. Swirlers, fuel lances, and premixing passages are not designed to withstand the high temperatures that would occur with a flame in the premixing section and can quickly sustain damage.

In some events, this hardware may liberate and travel downstream through the power turbine, causing catastrophic damage. Loosely speaking, flashback can be thought of as the “opposite” of blowout; for this reason, the H2 level limits in DLN system fuel specs are set by flashback margin.

Combustion dynamics. Fuel composition directly affects combustion dynamics. However, in contrast to other operability concerns, the effect is non-monotonic with operational parameters which make it particularly difficult to predict. For example, while increasing H2 levels always will decrease flashback margin, combustion-dynamics amplitude can either increase or decrease, depending upon other operating conditions.

Combustion dynamics pose a direct threat to combustion liners, transition pieces, and cross-fire tubes. If the combustion-dynamics amplitudes are severe, liberation of these parts may occur, with hardware travelling downstream through the power turbine. Combustion instabilities can also lead to blowout and flashback.

Because of the sensitivity of combustion dynamics to the details of the flame configuration inside the combustor, dynamics are sensitive to all changes in fuel composition—that is, changes in higher-hydrocarbon, hydrogen, or diluent content. Note: In this case, the risk is changes rather than increase. The Turbine Logic combustion dynamics monitoring group has observed increased challenges with dynamics, and the need for more frequent tuning because of gas composition issues.

Similar to flashback, autoignition can damage premixing passages, swirlers, and fuel lances.  As with any of these other operability issues, liberation of any of these parts poses a threat to the power turbine. Fig 1 shows the how quickly autoignition times decrease with increasing amounts of ethane and propane in natural-gas fuel. 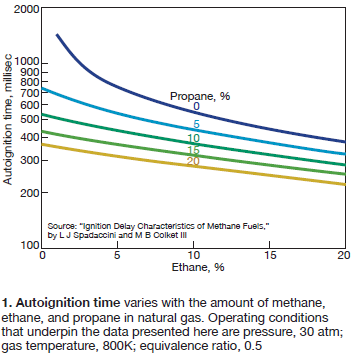 On the other hand, units that have fairly low NOx emissions (less than 5 ppm) will see a significant effect from changes in fuel composition. Data suggest that NOx concentrations may even double with changes in fuel composition for such low-NOx systems. Fig 2 shows how much NOx production can increase, in the low-NOx case, with increasing amounts of ethane and propane in natural gas. 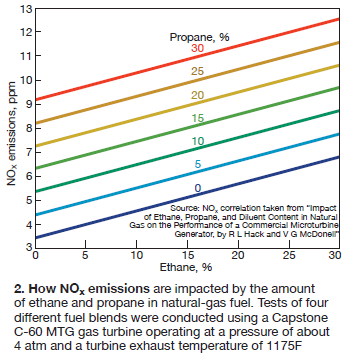 Takeaway 5: The lower a gas turbine’s NOx emissions, the greater the impact of fuel composition on those emissions.

Carbon monoxide. The effects of fuel composition on CO production are largely controlled by whether it moves the system closer to, or farther from, lean blowout. If the unit is near LBO, CO emissions typically already are high, but can still be raised significantly by the presence of higher hydrocarbons and hydrogen in the fuel. Away from LBO, CO emissions may still rise with the addition of higher hydrocarbons and hydrogen, but the effect is quite small.

A fuel treatment system will mitigate the fuel-variability effects on each of the operability issues discussed above. These systems are equipped for removing solid particulates and higher hydrocarbons. The latter is accomplished by condensation and liquid removal.

Most OEMs also recommend some degree of fuel superheating before use in a gas turbine to ensure that no fuel condenses before reaching the fuel nozzles. Condensed fuel can cause significant autoignition issues. Even with a good fuel treatment system, small concentrations of liquid hydrocarbons from the fuel gas remain a risk when liquids are entrained from the liquid knockouts. This may occur with higher hydrocarbons, because the knockouts fill more quickly and require more frequent draining than experience might dictate.

The greatest operational risk that cannot be managed by staying with OEM fuel guidelines is combustion dynamics. Turbine Logic’s experts strongly recommend users have a combustion dynamics monitoring system (CDMS) to warn of impending issues, and also have protocols in place for ensuring sensors are healthy; plus, appropriate notifications if levels exceed alarms.

In the authors’ experience, every engine monitored by Turbine Logic has had multiple dynamics excursions exceeding thresholds as the ambient temperature and load varied. The need for shorter tuning intervals only can be confirmed by CDMS.

If you continue to have combustion-dynamics issues while keeping NOx concentrations within regulatory limits, consider installing an auto-tuning system. It monitors dynamics and emissions and has control logic to minimize emissions while keeping combustion dynamics within acceptable limits to prevent hardware damage.

Auto-tuning systems typically have the ability to regulate several operational parameters— including firing temperature, fuel splits, and even fuel-split schedules. When either dynamics or an emissions excursion occurs, auto-tuning systems step in and nudge these parameters to return the gas turbine to safe and compliant operation. While seasonal tunes remain a good idea, and sometimes a necessity, the auto-tuning system will handle the day-to-day changes that gas composition variability may introduce. CCJ