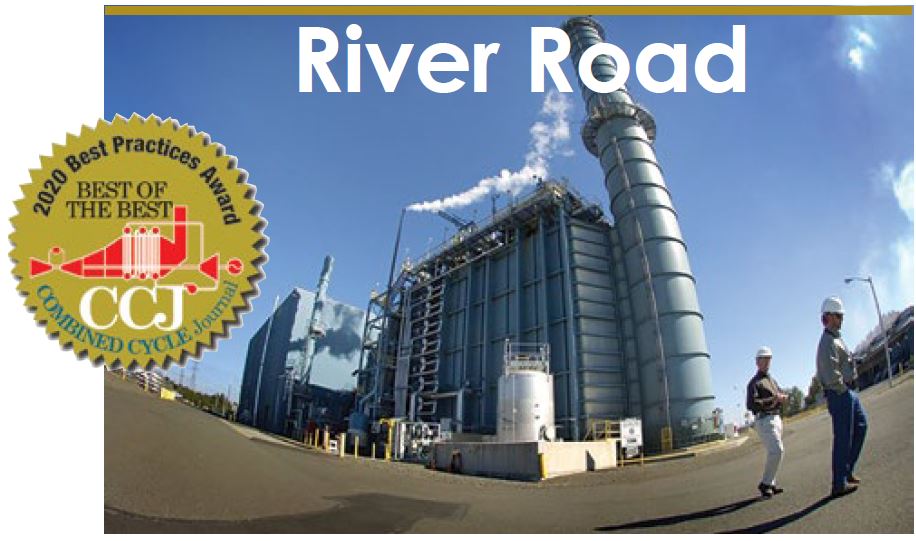 Challenge. After five years of operation, River Road Generating Plant was compelled by the Washington Dept of Ecology to eliminate use of chlorine for biological control in its cooling tower. Instead, the plant was instructed to use bromine. Several years after the switch to bromine, River Road began to experience a resilient and chemically resistant form of filamentous blue-green algae. Its growth in spring and summer got out of control.

Expensive and toxic algaecide treatment was required to limit algae growth. The plant discharges tower blowdown to the Columbia River under a NPDES permit with strict discharge limits. One consequence: Blowdown was not permitted for up to 12 hours following this treatment process to assure dissipation of residual algaecide and to maintain permit compliance. That led to high cycles of silica.

During the peak of algae growth, accumulation at the forebay trash screens upstream of the circulating-water pump suction became so great the screens had to be pulled and manually cleaned every three days to prevent collapse (Fig 1). Removal of the trash screens required a crane and crane operator at a cost of $4500 per event.

Solution. These combined factors prompted staff to seek out new technologies to control algae. In 2013, plant personnel located a company that provided algae control using floating ultrasonic devices (Fig 2). They were procured and installed in various locations and orientations in the tower basin. Algae growth was reduced substantially, but not eliminated during the summer.

The search continued for an effective non-chemical technology; reverse osmosis, flocculation, ozone, UV treatment, and electrodeionization were among the technologies investigated.

Because sunlight is required for algae to grow, nursery shade screens were installed around the tower perimeter. They reduced the light required for photosynthesis and did help to reduce the algae more than the ultrasonic devices did on their own. However, the algae problem was not eliminated entirely during the summer.

During the search for a solution, staff located a company, Flow-Tech Industrial Water Treatment Systems, Milwaukee, Wis, that had developed a product used in small-to-medium size HVAC applications for many years, with well-documented success.

The vendor proposed creating and using its patented non-chemical devices on an industrial scale at River Road. The relatively small components are mounted on circulating- and service- water system pipe flanges in strategic locations (Figs 3, 4). Each unit transmits AM radio frequency into the water systems and cooling tower basin. 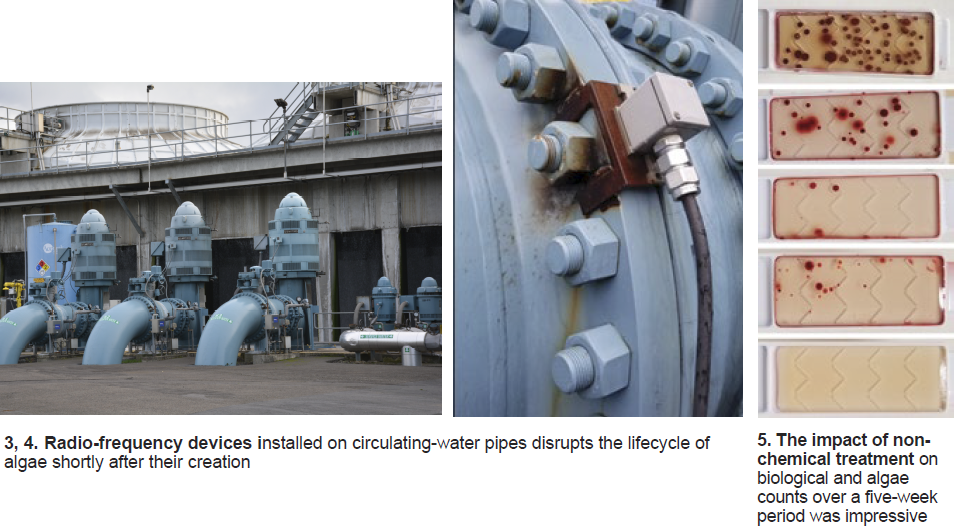 The theory of design is that the radio frequency disrupts the lifecycle of the algae in its single- cell haploidic form and kills it, before it forms viable colonies. Plant personnel worked with the vendor to develop and implement an industrial-scale test plan for the devices at River Road.

Results. Application of the new devices has measurably reduced the plant’s biological and algae count within the cooling tower. Chemical treatment has been reduced to an algaecide injection once every three weeks rather than every other day (Fig 5). Benefits identified thus far include the following:

Challenge. Following each generator maintenance activity, the system supplying the machine with hydrogen for cooling was restored and leak-checked using a soapy water product that bubbled or foamed if a leak existed.

A team member who attended the 2019 conference of the 7F Users Group saw a demonstration by Nitto Inc, Teaneck, NJ, promoting a pipe flange tape that changes color in the presence of hydrogen (Fig 6). Thus, it provides a visual indication of a leak because it will not return to its original color once hydrogen gas flow is stopped. Even though a soap test indicated no leaks, the team thought it would be a good practice to use the color-changing tape. 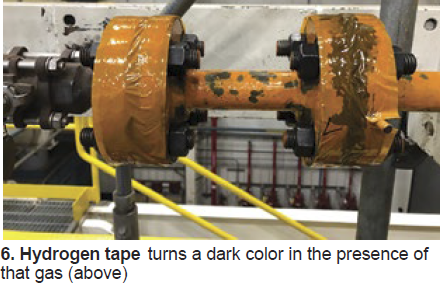 Solution. The team member presented this idea as a proactive safety practice to the safety committee. The tape was purchased and installed on every hydrogen flange. Leaks were found.

Results. Thirty-eight flanges were taped. All had been soap-checked prior to using the tape. Once installed, four flanges changed color within two days. Where leaks were indicated, tape was removed from the flanges, and the joints were soap-checked again. Only one of the leaks was large enough to cause bubbling visible to the eye.

The hydrogen-detection flange tape worked well as a pre-emptive safety check and has stimulated proactive thinking about previously unrecognized problems. This fits in well with the long-established plant safety culture at this VPP Star site. Use of the tape is now part of the hydrogen-system restoration procedure.

Challenge. River Road relies on one lube-oil tank to supply the bearings of the single-shaft plant’s gas turbine, steam turbine, and generator. The original oil conditioning unit supplied by the OEM was grossly undersized for the 10,000-gal sump and was removed from service shortly after commissioning.

In 2000, the plant purchased a portable conditioning unit to filter the lube oil. It was functional and cleaned the oil fairly well. As that unit reached the end of its useful life, and the sophistication of the plant team grew, a replacement was sought.

Solution. Plant personnel worked with a small, local oil-filtration company to design, construct, and install a new conditioning system—one that would fit in the same physical space as the original unit, have a higher throughput, and include online particulate and moisture analyzers.

Following a water-intrusion experience, plant personnel learned the importance of obtaining oil-quality test results quickly. Relying on sample results from a third party to determine moisture content and particle count had put the staff in a reactive mode instead of a proactive one. The new conditioning system provides real-time monitoring of 4-, 6-, and 14-micron particles (Fig 6). The dew-point monitor and associated instrumentation assure instantaneous detection of moisture in the oil.

Results. The new unit increased the oil conditioning rate from 13 to 38 gpm. Third-party analysis for 4/6/14-micron particulates prior to installation of the new system was 22/20/16; two weeks after installation it was 18/16/12.

Moisture in oil was not tracked regularly before the new system was installed. The data available showed the Karl Fisher number for entrained water averaged around 600 ppm. That number has been reduced to 25 with the new system.

Challenge. River Road’s cooling tower has five gearboxes, each containing about 20 gal of lube oil. The catastrophic failure of a gearbox poses the risk of releasing oil into the cooling-tower basin. From there it could migrate into the natural environment—more specifically, into the Columbia River—and result in a water-permit discharge violation.

Solution was to install a boom upstream of the cooling-tower circulating- water-pump trash screens to collect any oil that might be spilled, preventing it from reaching the effluent discharge piping (Fig 7). Oil collected can be removed by absorbent pads or skimming equipment. 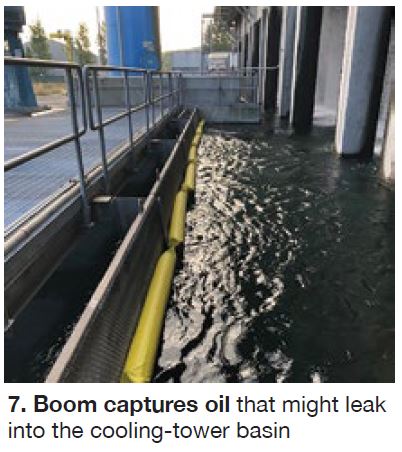 Results. The oil boom installed continues to provide a reliable way of preemptively capturing any oil that might leak into the cooling-tower basin. The boom is easy to handle and is cleaned during annual outages.

Challenge. At River Road, work instructions historically included two separate documents—a job safety analysis (JSA) and an operating procedure. Personnel using the work instructions had to review these documents side-by-side to understand the risks associated with each step of the process.

Moreover, since the facility maintains work instructions for many its processes, reviewing documents and keeping them updated required considerable time commitment for the onsite team on a regular basis.

Solution: Incorporate the JSAs into the operating procedures, providing a job safety analysis for the task at the beginning of the document. New format also includes more pictures pertaining to the process steps.