It seems reasonable to assume that relatively few engineers still active in the electric-power industry know as much about legacy GE gas turbines and their auxiliaries and controls as Dave Lucier. The founder and general manager of PAL Turbine Services LLC, Clifton Park, NY, and former manager of the OEM’s field engineering program, is well into his fifth decade of service to the industry. 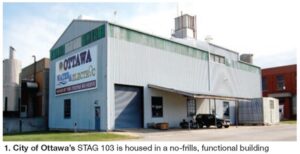 Lucier called several months back to say that his firm had just finished a borescoping assignment on the first STAG™ 103 combined cycle. He thought the Ottawa (Kans) Municipal Electric Dept deserved recognition for the excellent job plant personnel have done since startup (1967) in keeping the unit fit for duty (Figs 1-3).

GE built only two STAG 103s, according to company records, which were rated 11 MW based on the oldNEMA (National Electrical Manufacturers Assn) criteria of 80F ambient and 1000-ft altitude. The City of Hutchinson (Minn) installed the second unit in 1971. Interestingly, both cities are running their legacy combined cycles this summer because of the extremely hot weather. 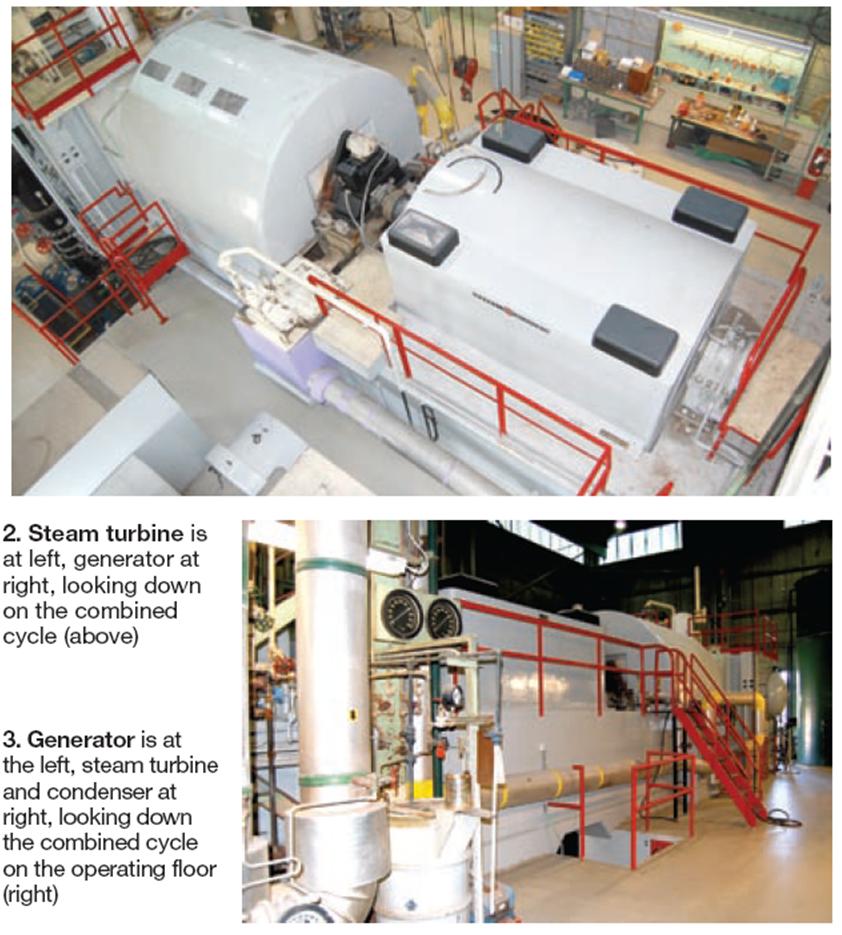 Background. STAG systems (GE’s acronym for its STeam And Gas prepackaged combined cycles) were introduced in the late 1960s. However, the two-shaft MS3002 selected as the basic building block for the Ottawa and Hutchinson projects, a proven engine, was first offered commercially in 1951 (Fig 4). This reliable model most often is used to power gas-pipeline compressors.

For clarity, the numerals that follow “STAG” mean the following: First digit is the number of gas turbines in the combined cycle, the zero is of no significance, the last number is the gas-turbine frame size (that is, 3 for an MS3002). A letter sometimes follows the final digit to identify the GT model. To illustrate: STAG 207B would be a 2 x 1 combined cycle with Frame 7B gas turbines.

The Ottawa combined cycle has logged only about 11,000 operating hours since hitting its 100,000-hr milestone at the end of 1993. Today it is in standby service, as isHutchinson’s.

Leon Wildeman, maintenance coordinator for the combined cycle and four recips rated 3, 3.6, 6, and 6 MW, said the STAG 103 is called into service perhaps four or five times annually (usually in summer) and operates for about a week following each start. When not dispatched, the unit normally is started monthly and run for eight to 12 hours for start-verification and training purposes. 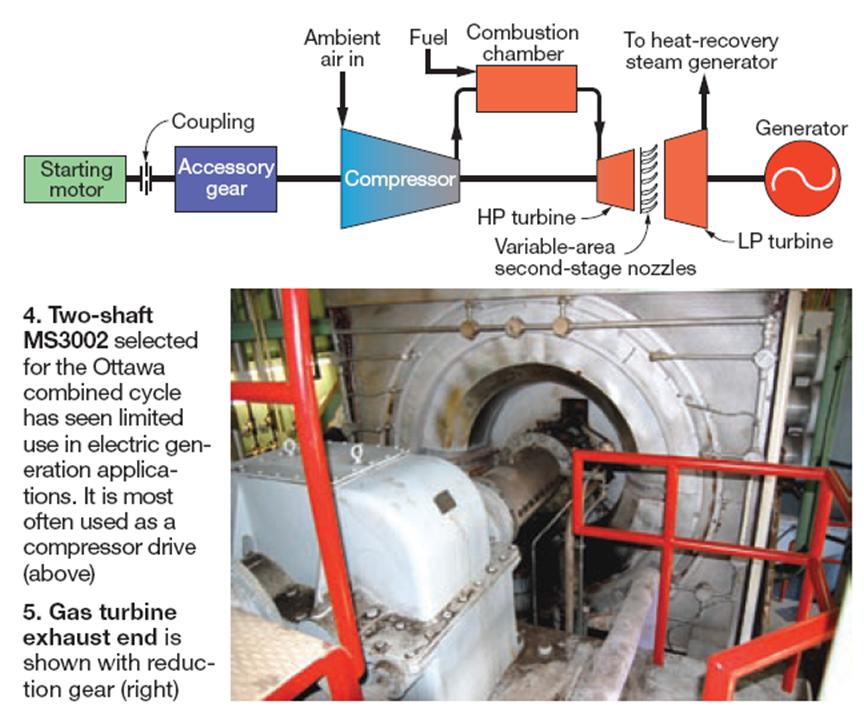 Lucier told the editors the PAL borescope inspection found no surprises and that the turbine was fit for duty. The last hot-gas-path inspection had been conducted early in 2001. At that time, maintenance personnel found the engine dirty but in good condition, considering the number of hours since the previous overhaul. Some erosion of compressor blades was noted and the HP turbine bucket tips had rubbed on the lower shroud blocks. Plus, all buckets were frozen in the dovetail fits. The rotor was overhauled in a Houston shop.

Work also was required in the combustion section. Small cracks in liners and transition pieces required repairs, and there was other heat-related damage as well. Bearing wear was in evidence, too. The load-carrying surfaces of journal bearings 1, 2, and 3 were repoured after inspection. Contractor personnel believed that bearing issues contributed to accessory-coupling misalignment and wear and it was targeted for replacement or repair.

The STAG 103 has a two-bearing, statically excited, air-cooled generator with the gas turbine coupled to the forward end and the multi-stage steam turbine to the aft end. The steamer, which has 14-in. last-stage blades, exhausts axially to a floor-mounted condenser. A single-cell induced-draft cooling tower and full-size circulating-water pump supply the total cooling-water flow requirement of the condenser, gas turbine, generator, and all Rankine cycle accessories.

An extended-surface heat-recovery steam generator recovers thermal energy from the nominal 970F gas-turbine exhaust to produce 400-psig/750F steam. Demineralized makeup water is supplied to the HRSG. Note that the HRSG, as well as the gas and steam turbines, were supplied by GE.

The MS3002F consists of a so-called HP turbine set—it incorporates a 14-stage axial-flow compressor, combustion section, and HP turbine—and the LP turbine, which is connected to the generator (Fig 5). HP turbine inlet temperature is 1600F when the unit is at base load. Exhaust gas exiting the HP section flows through variable-area, second-stage nozzles before entering the LP turbine.

Once synched to the grid, Lucier pointed out, the LP turbine shaft has to run at precisely 5979 rpm for the generator to produce 60-Hz power. When load is increased or decreased, HP turbine speed and the variable-area, second-stage nozzles respond to maintain LP turbine speed. 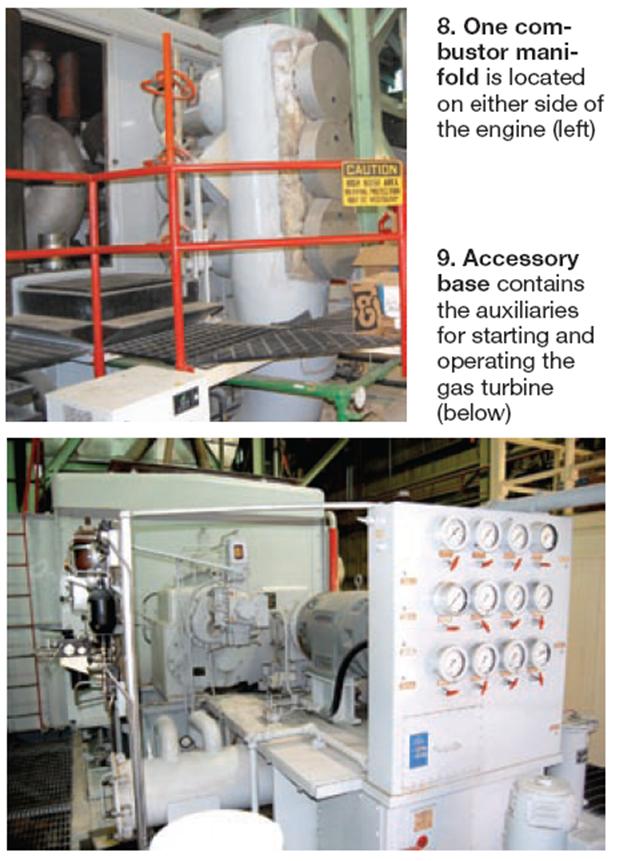 Combustion system for the MS3002F is unique. There are three combustors on each side of the engine. Two of the three chambers on each side have spark plugs; the third has a flame detector (Fig 8).

The STAG 103 came equipped with dual-fuel capability. When the combined cycle was installed, the city generated all of its power, which it did until 1979, with the GE unit in base-load service. Once Ottawa began purchasing power from the grid, the STAG 103 was relegated to peaking service and the more-efficient, faster-starting 6-MW recip engines were dispatched ahead of it (sidebar). Wildeman said the engines can be at full power in five minutes; it takes the STAG 103 about 45 minutes for a cold start.

The accessory base contains the necessary auxiliaries to start and operate the unit (Fig 9). An ac starting motor is coupled through an accessory gearbox to the HP turbine shaft at the compressor end. Motor-driven lube-oil pumps, lube-oil cooler, and oil filter are located above the oil reservoir.

The original control system had at its heart a mechanical/hydraulic control device known as a fuel regulator, manufactured by Young & Franklin,Liverpool,NY. The fuel regulator controlled fuel flow, and the power output of the LP turbine. HP turbine speed was controlled by another Y&F device: a nozzle regulator. In 1992,Ottawaupgraded to a Woodward NetCon control and protection system to improve starting reliability. Conversion of the gas turbine from dual fuel to gas-only was accomplished at this time as well.

The city of Ottawa supplies its 12,500 citizens with a combination of internal peaking generation and power purchased from the Kansas City Board of Public Utilities and Grand River Dam Authority. Peak demand of the city’s distribution system is 41.8 MW (established Aug 2, 2011 when the temperature hit 112F).

Ottawa receives 161-kV power at two of its three interconnections; 35-kV power at the third, which is located at the generating plant. Distribution throughout the city to 5100 metered locations is via about 60 miles of 12.4- and 4.6-kV lines.

Operation. Startup of the STAG 103 is semi-automatic. More specifically, many of the functions and operating sequences are manual with several sub-loop operations automatically sequenced and performed. Startup permissives include having turning gear “off” and key equipment in operation.

The unit then is cranked for starting by a 250-hp electric motor. When it reaches about 25% of rated speed, retractable spark plugs ignite the fuel/air mixture in four of the six combustion chambers. Crossfire tubes ignite the combustible mixture in the unfired chamber in each bank.

Ignition is maintained for a short period. When combustion becomes self-sustaining, the unit automatically comes to the so-called warm-up condition with the HP turbine set held at reduced speed and firing temperature until steam is produced and all required pre-acceleration conditions are in effect. At that point, the gas turbine acceleration is initiated manually and the STAG 103 comes up to governing speed. The generator is synchronized manually.

The Ottawa combined cycle is rated a nominal 11 MW, but Wildeman says they don’t push the unit at this stage of its life. That translates to near 10 MW. Leaks and other problems forced retubing of the HRSG’s superheater and evaporator sections in 2007 and 2009, respectively.

The economizer section is next: The latest test conducted by plant staff revealed that the unit ran out of feedwater flow at 9.4 MW. One problem is accelerated metal wastage caused by an inoperable stack cover actuator that gave moisture access to the horizontal tube bundles. A control system upgrade also is under consideration. CCJ