Challenge. Brooklyn Navy Yard Cogeneration Partners sells electricity, and up to 1 million lb/hr of steam, to Con Edison and the industrial park. In winter, the plant’s gas contract allows the supplier to recall that fuel when consumer demand is highest—for up to 19 days annually.

For years, the cogen plant had reliability issues when burning fuel oil and performing fuel swaps on both gas turbines. Two main problems were identified:

1. Hunting of the water injection system.

Both issues caused several forced outages each winter. During winter 2014, for example, the plant’s effective forced-outage rate (EFOR) during the fuel-oil season was approximately 11%.

1. The water injection system is used for power augmentation when burning natural gas, and NOx reduction when burning fuel oil, making it a critical system. Supply pressure was hunting by approximately 50 psi. This caused damage to the automatic recirculating (ARC) valves and the suction pressure regulating valve incorporated into the skids for both engines.

Average time between failures for these valves was three months and shop rebuilds cost between $3000 and $5000 per valve—amounting to an approximate annual cost of $36,000.

2. The fuel-oil injection pumps rely on a foreign-made back-pressure regulator known as the startup pressure relief valve. The lead time for parts is long and the manufacturer has no US representative. 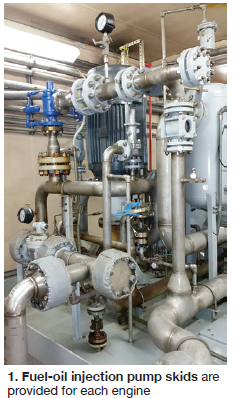 1. Testing of the water injection system was easy, since it is routinely used for power augmentation when the engines are burning gas. However, it was difficult to determine if the hunting was caused by the ARC valves or the suction pressure regulator.

The first step was to check valve sizes and verify the installation met OEM specs. Ken Engel, maintenance supervisor, found that the valves did meet specs; however, first-hand experience with hunting by this particular pressure regulating valve led Engel to suspect the recommended 10 pipe diameters downstream was not an adequate distance for the pressure sensing tap.

To further complicate the issue, the pipe was located in an inaccessible area of the overhead pipe run, with no extra fitting locations. Even if access was available, the plant would not be able flush the line after installing a threadolet in order to relocate the sensing line.

Engel was able to find a pressure regulating valve with internal sensing, the same face-to-face dimension, and appropriate capacity for the application. For the price of only two rebuilds the valve was procured and installed. When it was tested, the suction pressure was rock steady: No more hunting, no more rebuilds.

2. Several problems were noted with the startup pressure relief valves. These included the needle-valve adjustment drift attributed to a worn locking mechanism, and unrepeatability of the settings any time maintenance was performed on the valves. Any time these issues were addressed, the valve had to be tested.

Jim Sinodinos, senior operating engineer, recommended a way to test the valves. This was a challenge since the control system does not allow a pump start unless the fuel-oil mode is selected. Also, the pump’s motor controller does not have a hands-off-auto (HOA) switch. 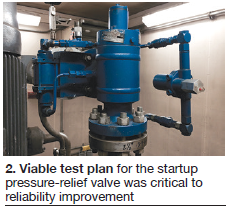 Sinodinos developed a plan and coordinated the multi-step effort between the field and control-room operators to force a run on the pump. This enabled the pump to be tested in both the LP and HP modes by actuating the solenoid from the control room.

This practice allows any air, which causes unrepeatability of the valves, to be forced out after maintenance is performed on the valves. The plant has made this commissioning procedure a standard practice and it has allowed the maintenance team to troubleshoot and correct problems as required.

Results. During the winter of 2015, the plant had its gas recalled the contractual maximum 19 days. This was a record for the plant not only in total fuel-oil run time, but the plant maintained 100% fuel oil reliability for the first time in its 19-year history.