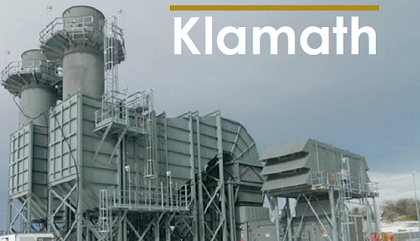 Challenge. The facility consists of two Pratt & Whitney FT-8 TwinPacs. All four gas turbines have associated ductwork that includes individual hot SCRs. The ductwork is sized large enough to require an 8-min purge before the units can be started. With only one starter per TwinPac, one gas turbine must be started and paralleled with the grid before the second unit can be started. This configuration required 16 minutes to get the TwinPac to its 50-MW base load.

The local balance authority is offering power-purchase contracts to qualifying facilities that can guarantee generation within 10 minutes. With the existing configuration and purge time, entering that market would be impossible.

Solution. For several years, plant staff attempted to engineer a solution that would get the facility into the “10-min market” but all of the ideas fell short on a return-on-investment basis. Lower-explosive-limit (LEL) detectors were considered but it proved difficult to determine where to locate them within the duct.

Purge fans were also discussed. This idea proved to be overly expensive once redundancy and parasitic loads were considered. Additionally, the development of a procedure of when to purge without requiring the plant to run the fans continuously proved difficult.

In 2011, NFPA 85 was modified to allow gas turbine operators to avoid the purge requirement if it can be proven that no gas has entered the exhaust ductwork. Specifically, NFPA 85 (2011), paragraph 8.8.4.6 mandates triple-block and double-vent valves on gas-turbine and duct-burner fuel lines. Also the following: (1) Valve positions shall be continuously monitored. (2) Pressures in the block-valve sections shall be continuously monitored. (3) Valves must be validated for leak-tightness prior to each startup and following each shutdown.

This idea proved both affordable and one that plant staff could develop in-house, avoiding expensive third-party engineering. The management-of-change process engaged all departments to ensure proper valves were purchased, installation locations were identified, and all parties agreed on the extensive logic.

Many other qualifications are made to validate the system and prove that no gas could possibly get into the engine. All valves are monitored via feedback with any deviation requiring a full purge prior to start. Pressure transmitters (PT) 1105 and 1106 are compared to fuel supply pressure while running in order to validate their accuracy (schematic). 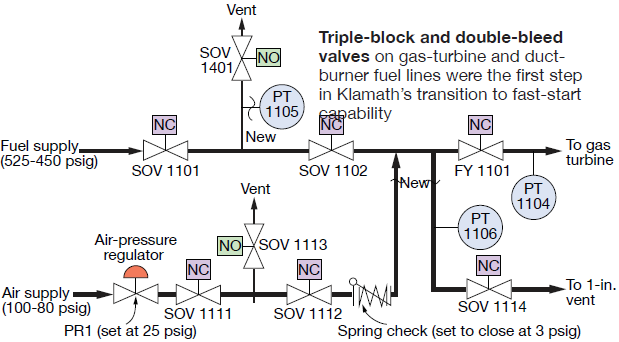 During shutdown, PT 1105 must not rise above 5 psig. If the indication rises above this value, a problem exists within the first double-block-and-bleed piping. PT 1106 must not drop below 25 psig and not rise above 45 psig. A high pressure would indicate a gas leak into our second double-block arrangement.

Various timers and sequencers have been developed to ensure the second double-block piping is purged and that the ductwork is purged during shutdown. Ductwork purge credit is given while the unit is coasting down and the fuel piping purged out of the solenoid-operated valve (SOV) 1114 vent.

Once the unit has coasted to a speed just below standard purge speed, the starter is engaged to complete the full purge time. This is not required, but plant staff believes it a more conservative approach and had no impact on the ability of the facility to meet market demands.

The operator has indication of the demand and feedback of all valves. In the event of a system failure, the fast-start logic is disabled and an alarm is displayed. Upon repair of the failed component, the operator can manually purge the unit.

Once a full purge is complete and the permissives met, fast start then is enabled automatically. The operator also has a permissive graphic to allow for rapid troubleshooting and repair to get the system into a normal configuration. 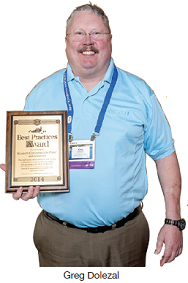 Results. The original OEM logic and supplied fuel piping configuration required a full 8-min purge of the exhaust ductwork prior to light off. Including the startup of the auxiliaries and ramp of the machine, it took approximately 10 minutes to get the first unit paralleled to the grid.

Once the generator breaker is closed, the second unit could be started with an additional 8-min purge. Overall, the TwinPac took approximately 16 minutes to get to base load. That duration is too long for the facility to be considered for a 10-min market that has emerged in the plant’s region.

With fast-start capability, the first unit can be paralleled to the grid within five minutes and the entire TwinPac at base load within eight minutes. That is an 8-min improvement and under the 10-min requirement. Furthermore, no additional thermal stresses have been added and in cold weather, these stresses have been reduced by not pushing cold air through a hot machine for an 8-min purge.

The facility must still compete for the quarterly contracts but it now has the ability to meet all of the requirements necessary. Although the system is new, plant staff and the asset management team are confident that the return on investment for the project will be swift. In an industry that requires continual improvement, a talented and experienced staff allows the facility to design, install, and commission complex projects without the assistance of outside parties.