Three major changes to NFPA 70E slated for the 2015 edition

NFPA 70E (2015) will change in several areas from the current (2012) standard for electrical safety in the workplace. Three are significant: New Personnel Protection Equipment (PPE) tables and elimination of both the Hazard/Risk Category Zero (HRC 0) and the Prohibited Approach Boundary (PAB). These changes and a few others are discussed in this article.

Clarifying “normal operation” [Section 130.2(A)(4)]. In the 2012 edition, Informational Note No. 2 for Section 130.7(a), states: “It is the collective experience of the Technical Committee on Electrical Safety in the Workplace that normal operation of enclosed electrical equipment, operating at 600 volts or less, that has been properly installed and maintained by qualified persons, is not likely to expose the employee to an electrical hazard.” (Bolface added by the author.)

For the situation described, arc-rated PPE is not required. But there were questions about what qualifies as “normal operation.” In response, the committee added Section 130.2(A)(4), which states: “Normal operation of electric equipment is permitted when all of the following conditions are satisfied:

The purpose of this addition is to make it clear that, as long as a device is operated in the manner specified by the manufacturer, PPE is not required by the standard, but a worker can wear it if he or she chooses.

The section further states that the situation “is not likely to expose the employee to an electrical hazard.” This is not the same as saying there is never going to be a hazard. Nor does it imply that PPE is not required under any circumstances. In short, it is up to the “qualified person” to assess the risks involved and wear appropriate PPE.

Also, note that “normal operation” means what it says. If the manufacturer says to push a button to operate the equipment, that is how the operator must proceed. Otherwise, the work falls outside the scope of this part of the standard.

Not all electrical equipment is in good condition [Section 130.2(A)(4)]. The 2015 revision also will include clear definitions for certain phrases (Fig 2). The following informational note has been added: “The phrase ‘properly installed’ means that the equipment is installed in accordance with applicable industry codes and standards and the manufacturer’s recommendations. The phrase “properly maintained” means the equipment has been maintained in accordance with the manufacturer’s recommendations and applicable industry codes and standards. The phrase “evidence of impending failure” means that there is evidence such as arcing, overheating, loose or bound equipment parts, visible damage, or deterioration.” 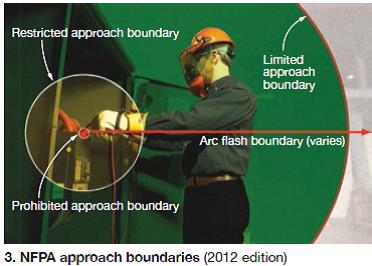 Prohibited Approach Boundary [Section 130.4(B)]. As the standard is written now, there are three shock boundary lines (Fig 3). The closest boundary is the PAB, but it does not trigger any restriction or action. This caused confusion and, therefore, it will be removed in the 2015 revision. The Restricted Approach Boundary (RAB) is that point beyond which only qualified personnel can pass and they need to wear insulating gloves and the necessary PPE. Further out is the Limited Approach Boundary (LAB), which is the closest an unqualified person can get to exposed energized conductors and circuit parts.

Clarify labeling [Section 130.5(B)]. The 2009 edition labeling requirements caused some confusion, if taken literally. The standard states that electrical equipment had to be labeled, but did not specify what kinds of electrical equipment. Some in the industry interpreted that to mean all electrical equipment had to be labeled, including outlets and lighting switches. The 2012 edition added clarity, by using wording similar to NEC Section 110.16. This wording was carried over into the 2015 edition of NFPA 70E, the label information was modified somewhat to clarify the committee’s intent.

“Electrical equipment such as switchboards, panelboards, industrial control panels, meter socket enclosures, and motor control centers that are in other than dwelling units and that are likely to require examination, adjustment, servicing, or maintenance while energized shall be field-marked with a label containing all of the following information (Fig 4):

In short, only equipment that may require inspections, adjustment, servicing, or maintenance while energized is required to have the field marking (label) in place. Otherwise, the device does not need to be labeled.

Clarifying information was also carried over from the 2012 edition Section 130.5(B), which states: “Exception: Labels applied prior to Sept 30, 2011, are acceptable if they contain the available incident energy or required level of PPE.” And, “The method of calculating and the data to support the information for the label shall be documented.” The purpose of the section is to provide workers with the information needed to properly protect themselves from electrical hazards by allowing differing methods, not to restrain how that information is provided.

The following sentences were also added: “Where the review of the arc-flash hazard risk assessment identifies a change that renders the label inaccurate, the label shall be updated.” Plus, “The owner of the electrical equipment shall be responsible for the documentation, installation, and maintenance of the field-marked label.”

In short, if the label becomes inaccurate, it is the responsibility of the equipment owner to ensure that the label is properly updated. Previous editions of NFPA 70E did not specify maintenance was required or who was responsible for maintaining this safety-critical information.

No storage [Section 130.6(H)]. This section states, “Clear spaces. Working space in front of electrical equipment required by other codes and standards shall not be used for storage.” This was added so 70E would meet the requirements of various fire codes and OSHA standards, which forbid storing anything, even temporarily, in the working space of electrical equipment.

Eliminate HRC 0 [Section 130.7(C)]. This category created some confusion in the industry because it did not require the use of arc-rated PPE or clothing. Prior to the 2009 edition of NFPA 70E, 12 oz/yd2 cotton or wool clothing was thought to provide some arc-flash protection for lower energy faults. Testing showed that this was not the case, and if the cotton or wool did ignite, it could cause large area burns. Since cotton or wool clothing cannot provide arc-flash protection, the committee believed it was inappropriate to include in a listing of arc-rated clothing.

Those tasks that pertained to the use of HRC 0 were removed. HRC 0 meant the person was beyond the boundary where arc-flash PPE was required. Even with the HRC 0 requirement removed, there are still some requirements when it comes to clothing—such as not wearing any melting fiber clothing when working on or operating energized electrical equipment.

Remaining (without changes) is Section 130.7(C)(11), which states, “Clothing consisting of fabrics, zipper tapes, and findings made from flammable synthetic materials that melt at temperatures below 315C (600F)—such as acetate, acrylic, nylon, polyester, polyethylene, polypropylene, and spandex, either alone or in blends, shall not be used.”

In short, meltable fabrics are prohibited (also prohibited in Section 130.7(C)(12)), but in its 2012 form, the standard did not clearly state whether meltable fabrics were prohibited for all electrically related tasks. Are they permissible if the worker is outside the arc-flash boundary? The committee has a proposed Tentative Interim Amendment (TIA) requiring that non-meltable clothing be worn—even if the table indicates that arc-flash PPE is not required.

New arc-flash PPE tables [Section 130.7(C)(15)]. The 2015 revision will include several formatting changes to the PPE table (Table 1). The current (2012) table lists both activities that do and do not pose an arc-flash hazard. For example, operating a panelboard is listed, even though it does not pose an arc-flash hazard and, therefore, does not require arc-rated clothing or PPE. These types of activities were included to demonstrate that not all normal activities posed a substantial risk of an arc flash, but some in the industry found it confusing.

In the new configuration, the existing PPE table will be split in two. Table 1 answers only one question: “Is there a significant arc-flash risk?” This table still lists activities that pose a potential arc-flash hazard (working on equipment that show signs of impending failure) and those that do not (non-contact thermography). If no substantial arc-flash risk is present, no further action is mandated by NFPA 70E.

In the revised table, there is no perceived arc-flash hazard as long as the equipment is properly installed, properly maintained, and there is no evidence of impending failure on some of the listed tasks. If an arc-flash hazard is present, Table 2 is used to determine arc-rated clothing and PPE.

Risk must be determined by the user. Determining the risk in performing a task is one of the most difficult, and critical functions in building a risk assessment. The only time electrical equipment poses no risk is when it is in an electrically safe work condition; otherwise, this “residual risk” must be evaluated. Then, it must be determined if the task is safe to perform. For example, if a worker is troubleshooting electrical equipment, it is no longer operating normally; it is in distress and arc-flash protective equipment must be worn to operate it or perform any other task on or with it.

Table 2 for 2015 is very similar to the existing one (limits and categories remain the same), but PPE categories are no longer based on perceived risk. In the 2015 revision, the arc-flash boundaries are rounded up to the nearest foot (except for PPE Category 1) and working distances are the same as in the current table.

PPE Category 1 is still 19 in., because rounding up caused a conflict with the requirement that “all parts of the body inside the Arc Flash Boundary (AFB) must be protected.” If it had been rounded up to 2 ft, the back of the head would probably be within the AFB and workers would have to wear an arc-rated balaclava. This is not the intent of the committee. CCJ