You don’t hear much at industry meetings these days about physical security of power generation and delivery infrastructure and personnel. Cybersecurity topics get most of the attention. But that doesn’t mean work on physical security solutions has stopped. Certainly not.

One recent development concerns transformer protection. Six years ago (Apr 16, 2013), you may recall, an electric substation in California was attacked by snipers with at least one high-powered rifle. Within 20 minutes, they knocked out 17 transformers and shut down the facility for nearly a month. The incident at Metcalf substation, although well publicized, was not an isolated one. But at least some experts believe this was a planned attack and of greater concern than incidents that had been reported previously.

Concerned about network safety and reliability, Siemens has taken significant steps to develop and test new materials and designs that enable its transformers to withstand ballistic attacks. Its early work indicated that the 0.375-in. steel sheet typically used for transformer oil tanks, could be penetrated easily by a UL752 Level 8 bullet, such as the 7.62-mm copper-jacketed (lead core) projectile.

So the company set about developing a material capable of deflecting a UL 752 Level 10 bullet, the highest class of rifle projectile (.50 caliber) addressed by the UL standard. Steel is preferred as a protective barrier because of its high strength and hardness, plus high ductility, formability, and durability. 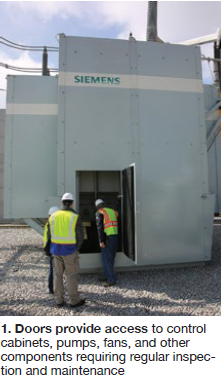 Siemens’ bullet-resistant panels for new and retrofit applications are supported on brackets that attach directly to the transformer foundation or to the oil tank and protect the tank, cooling equipment, conservator, turrets, and the bottoms of bushings—all while allowing air movement for efficient cooling. Neoprene strips isolate the panels from the support structure to minimize the transmission of vibration.

The transformer protection system, developed by Siemens’ European R&D group after the Metcalf attack, is manufactured in offshore factories. Three systems have been retrofitted to date, one on a 230-kV transformer east of the Mississippi. Two more systems were supplied with new transformers. Customers were not available for comment because information on installations is on a “need-to-know” basis.

Siemens reported having several customer inquiries, both in the US and elsewhere, with a focus on their most critical transformers—all rated 100 MVA and above. The editors are not aware of any grid operator currently mandating the installation of a protection system such as that offered by Siemens.

Potential customers believe that the transformer components of greatest concern in a ballistic attack would be the main oil tank and radiators, with the bushings on top of the unit as attractive secondary targets. The suggestion is to switch to a different bushing material—a high-strength polymer. Bushings are considered “less critical components” because you can keep replacements in storage. 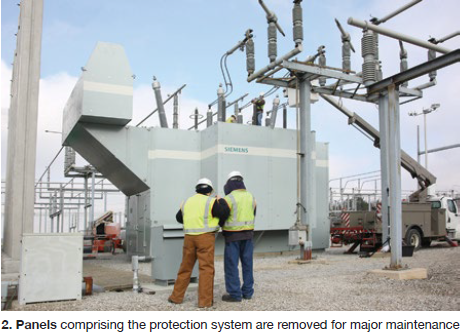 If you’re considering the retrofit of a bullet-resistant protection system for your transformer, the following timeline may assist in planning:

Expect the weight of the protective panels to run 50 tons. By comparison, a typical large transformer will tip the scales at 200 tons (350 tons with oil), which means some foundation work might be needed. In most cases it is possible to install a new pad to support only the panels.