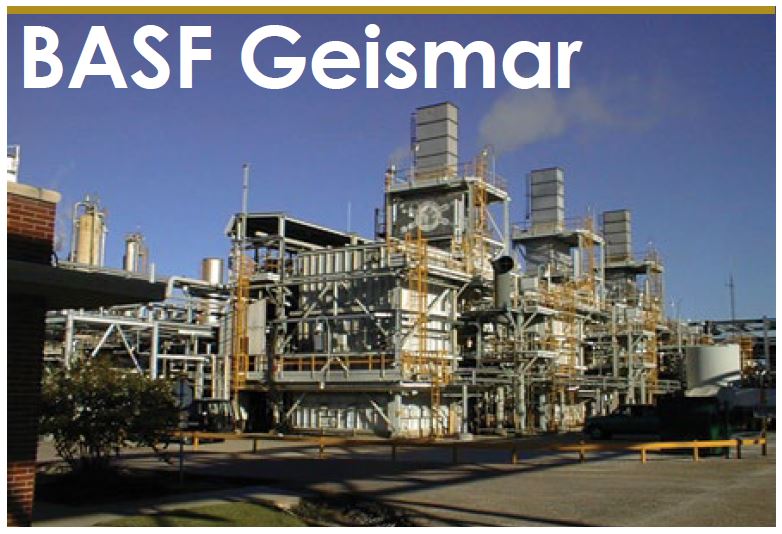 Challenge. Boiler combustion controls are designed to optimize the air

flow to the fuel flow rate such that sufficient air (oxygen) is available for complete combustion and the amount of performance-robbing excess air is minimized. Recall that insufficient air results in the  formation of excess carbon monoxide, a regulated parameter, as well as a loss in efficiency because of  incomplete combustion.

Part of the air-flow controls programming at BASF Geismar allowed for operator adjustment of the stack  O2 set point value—an O2 bias value. An operator could enter a negative bias in an attempt to lower  stack O2, thereby increasing boiler efficiency. But if the O2 value were reduced too much, insufficient air would be available for combustion, thereby producing an excessive amount of CO. By contrast, if the O2 bias value was set too high, an excessive amount of air would be used, leading to inefficient combustion.

Powerplant board operators have many duties and do not have the time to babysit the O2/air controllers to fine-tune the O2 bias value and to make adjustments each time boiler load or fuel composition changes. To avoid nuisance CO alarms, operators typically would set the O2 bias to a high value, contributing to inefficient operation.

Control schemes, before and after the staff effort, are illustrated in the diagram.

Results. The efficiency controller and CO override controller have worked very well. Operators no longer have to adjust the O2 bias value as it now is generated automatically. The boilers operate at the targeted values and any CO excursions are handled automatically without operator intervention. 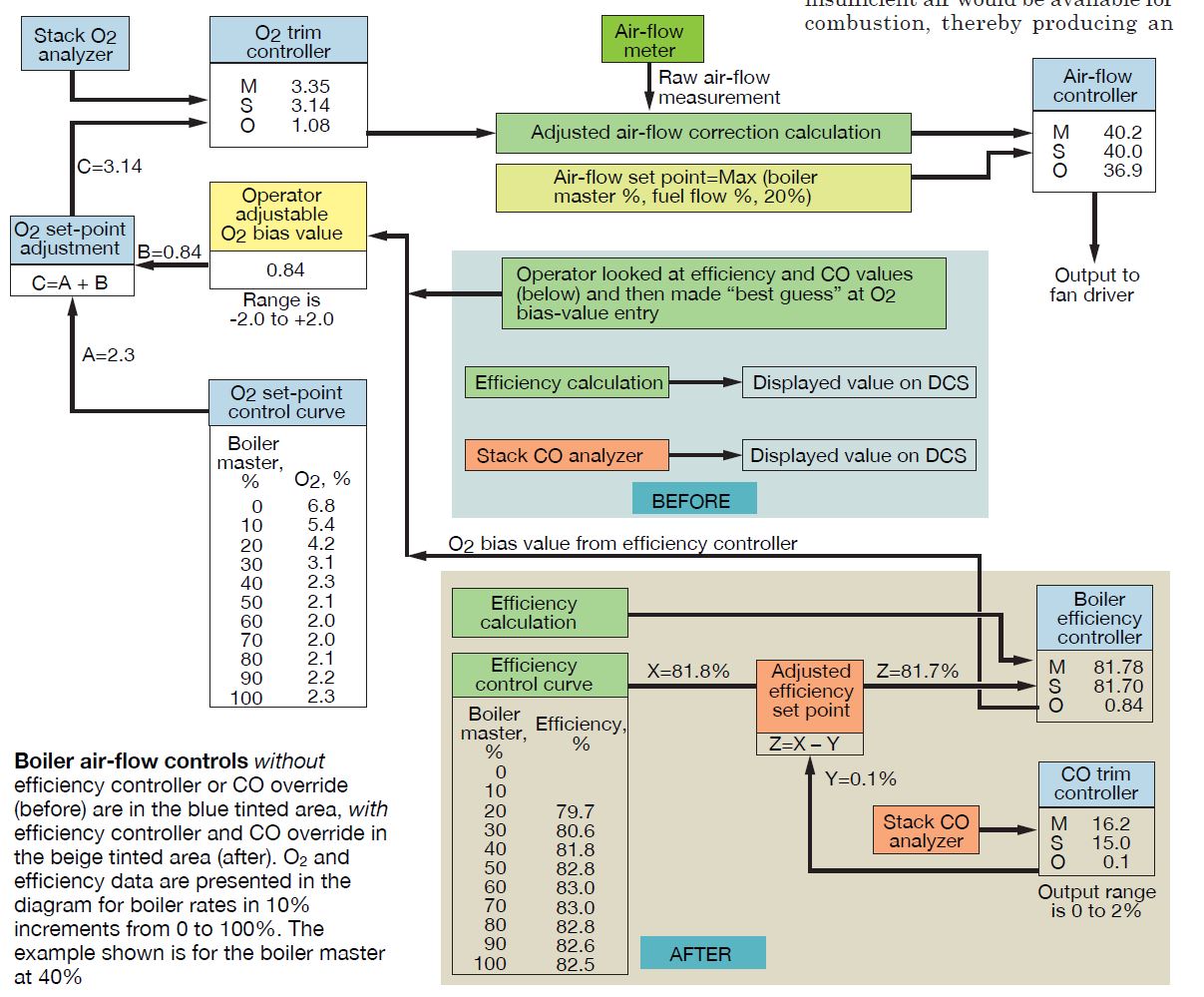 Challenge. Develop a tool for the operations staff that provides a simple and intuitive display of the performance of various systems and equipment and is easy to use. Critical to the development of a user-friendly performance dashboard are the following:

Some KPI target values were a constant value—such as zero for steam venting NS 70,000 lb/hr as the target for purchased steam. However, many KPI targets vary with operating conditions.

For instance, the expected efficiency of a boiler is not a constant value but varies based on boiler load, changes in fuel composition, etc. Similarly, gas-turbine output varies considerably with ambient-air temperature.

Equipment and system performance models were developed for a wide range of operating conditions. At BASF-Geismar Utilities, most of the modeling was based on real-life operating data collected when the equipment was known to be operating well. Thus, the operational targets are proven performance metrics and not necessarily based on new equipment design data, which in some cases may not be appropriate.

Results. The dashboard created (figure) shows the KPI data together with a green, yellow, or red indicator light—to provide an instant indication of performance. An Excel spreadsheet was used to download the necessary process data from AspenTech Explorer and perform the necessary calculations.

The performance data displayed shows average values for periods of one, four, 12, and 24 hours along with the current performance. Providing data in this format allows performance trending.

Note that the small button with the “T” is a quick link that opens a trend graph for that particular parameter. Another quick link at the bottom of the dashboard opens a troubleshooting file which can be used as a guide to correct poor performance.

From this display you can see boiler No. 4’s efficiency performance was unsatisfactory but improved. Similarly, steam was vented hours ago but the vent is now closed. Condensate return rates dropped and are still marginally low and should be investigated/addressed.

Data displayed in this manner does not tell, for instance, which boiler is operating most efficiently, but rather indicates how the actual boiler efficiency compares to the expected performance. 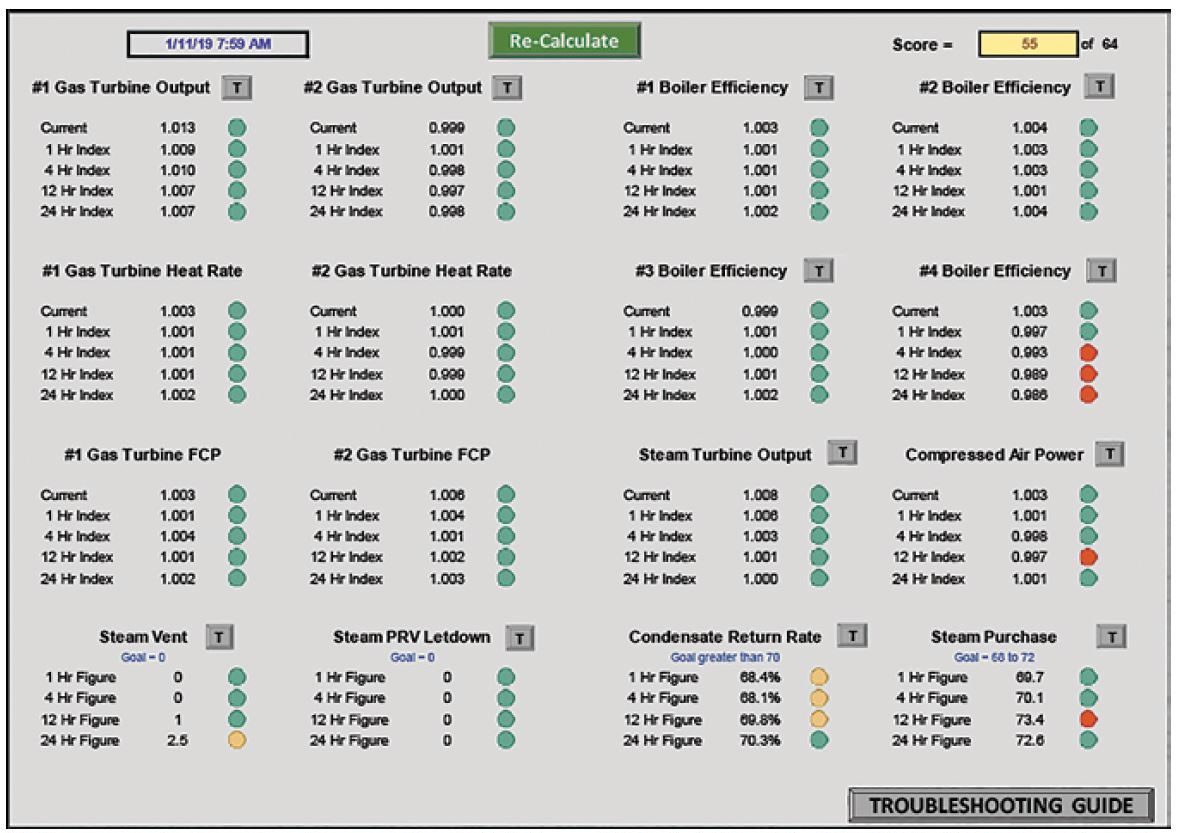 Performance dashboard enables operators to tell at a glance if a particular system or piece of equipment is meeting operational expectations by the color of its indicator light. The data shown account for changes in the performance target as operating conditions vary. The “score” at the upper right reflects the number of green lights among the 64 calculations presented. A troubleshooting button at the bottom right provides operators methodology for bringing off-normal conditions back into spec