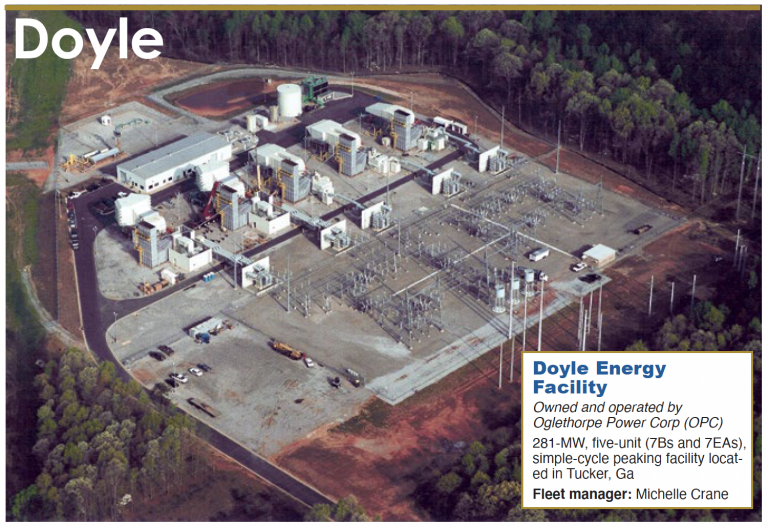 Background. Doyle Unit 1 is a 1968 GE 7B gas turbine with a 64-MVA/14.4-kV, 30-psig hydrogen-cooled generator. A thorough investigation of the engine by OPC engineers revealed degradation of its asphalt insulation and estimated remaining life at less than two years. Several equipment condition and operational performance gaps with the hydrogen cooling system also were identified during unit inspection and testing. Bringing the cooling system up to industry standards would require an estimated investment of $400,000 to $500,000.

Challenge. Find a safe alternative to the hydrogen cooling system for the predicted remaining life of the generator.

Solution. Oglethorpe Power personnel researched the practicability of using helium as the cooling medium in a hydrogen-cooled generator and in April 2018 the idea was tested and implemented on Unit 1.

A hydrogen-to-helium conversion was considered primarily because of condition issues with both the hydrogen cooling system and generator stator. Regarding the former, the original OEM control panel was 50 years old, the hydrogen scavenge system was in poor condition, there was no haz-gas detection for hydrogen and no emergency auto-purge functionality, etc.

Regarding the stator, a rewind was recommended because of its deteriorating condition, polarization index was less than 2 Mohms, debris from the degrading asphalt insulation was accumulating at both ends of the stator, glass tape was unraveling on series loops at the collector end, stator end basket was in a weakened condition, etc.

Results. The Doyle Unit 1 generator was tested successfully using helium as the cooling medium on Apr 13, 2018. For verification purposes the machine was operated from a minimum load of 52 MW to 60 MW while varying reactive power from +30 to -10 MVArs. Helium and field- and stator-winding temperatures were monitored and captured throughout the trial run, along with gas pressure (charts).

Generator temperatures were 20-25 deg F warmer with helium as the cooling medium than with hydrogen. The average gas temperature of 166F was well within the Class B insulation maximum temperature requirement of 266F. Helium purity, monitored with in-place calibrated instrumentation, was maintained without need for scavenging; no windage loss was observed. Testing proved the unit could operate with sufficient cooling to the generator, and without operating limitations, while using helium coolant.

During the 2018 summer season, Doyle Unit 1 was dispatched 12 times for peaking purposes, operating 57.2 hours. As predicted, a generator fault caused by age and insulation deterioration did occur as the summer was winding down; however, an inspection found not connection between helium cooling and the failure.

OPC identified the following benefits of using helium as the cooling medium in the Unit 1 hydrogen-cooled generator:
Eliminated a flammable-gas hazard.
Consumed less gas coolant.
No operating restrictions.
In-place instrumentation could be calibrated and used for purity monitoring.
Minimal cost impact, plus the possibility of reclaiming helium when purged. Additionally, there could be a commodity cost reduction if bulk liquid helium is used and converted to gas onsite.
In sum, testing and operation of the Doyle Unit 1 generator verified the validity of helium as a possible alternative to hydrogen for generator cooling.