The Air-Cooled Condenser Users Group (ACCUG) annual meeting was held outside the US for the first time, in Queretaro, Mexico, Oct 21-24, 2019.

The following reviews highlights of selected presentations. To learn more, visit the group’s website at www.acc-usersgroup.org.

The subject plant was commissioned in 2010 “with minimal sampling and analysis, and no clear pH target.” After several years of operation, iron in condensate and feedwater exceeded 50 ppb, an unacceptably high value. Outage inspection showed a Dooley Howell Corrosion Index of 4C, indicating the significant corrosion damage shown in Fig 1. Details are presented in the user group’s report ACC.01, “Guidelines for Internal Inspection of Air-Cooled Condensers,” available online at no cost at http://acc-usersgroup.org/reports/.

In 2014, improvements were made in the plant’s sampling and analysis panels and a pH target of 9.8 was set using ammonia. After a year of unsatisfactory results at pH 9.8 (iron remained high), the owner/operator attempted to feed a blended filming amine to a target residual but was unable to verify results. The target pH was changed to 9.4.

As measured in the 2017 outage, the DHACI remained at 4C.

This presentation showed the complexities of filming chemical utilization, noting thermal decomposition of neutralizing amines and difficulties in achieving an optimum feed rate. 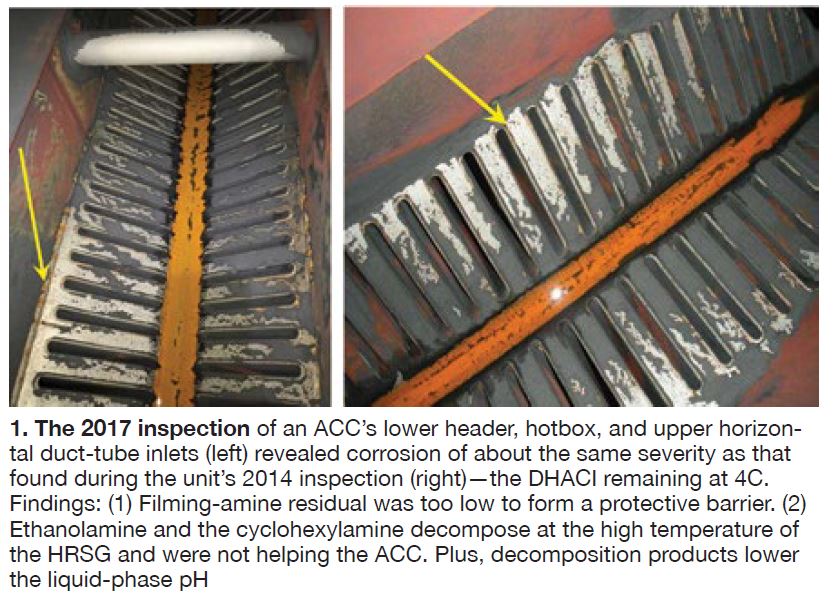 Corporate chemistry guidelines are based on the recommendations of both EPRI and the International Association for the Properties of Water and Steam (IAPWS). One principal objective, Hernandez explained, is an ideal pH level which “must be controlled properly within the recommended range.” He noted two plants with pH targets of 9.4 and 9.6, both showing acceptable iron levels.

Design plant output had been “unattainable during the summer months because of high backpressure. The significant reduction in power output was attributed to ACC under-performance in hot and windy conditions.”

Moctezuma added that “even though the condenser was sized, specified, and supplied correctly, there had been degradation from severe fouling and tube damage. Performance was affected more by higher temperatures and winds.”

The owner/operator considered options and selected a wet/dry parallel condensing system (Fig 2). This was based on considerations that included:

In this system, “exhaust steam is simultaneously condensed in both a wet evaporative and existing dry cooling system.” The goal was to “remove the steam-turbine backpressure limitation during all periods with ambient temperatures higher than 86F—about 1000 hours per year.”

Advantages of the parallel system included:

However, the performance-reducing impacts of local winds remained.

Windscreens were selected to reduce both wind speed and crosswind effects. All available options of type and location were considered. A combination of cruciform and suspended screens was optimal for the atmospheric conditions at the plant. ACC structural reinforcement was needed to comply with Mexican regulations. Screens were installed in May 2018.

Derek Silbaugh, an engineer with Black Hills Energy, reviewed plans to undertake replacement of the tube bundles in an ageing ACC. The multiple issues involved in determining a cost-effective approach for improved performance and long-term reliability are complex but relevant to others in similar situations. Silbaugh’s presentation is available on the ACCUG website.

His presentation included motivations and objectives for windscreens at two 800-MW combined cycles, each with an ACC having nine streets and four cells per street. Screens were installed in 2014 on one ACC to allow greater capacity during hot windy days.

Suspended screens were supplied on the first unit, with performance measured one year before and one year after. Comparisons based on similar ambient temperature, relative humidity, with speed and direction, and backpressure showed an output improvement of 15 to 20 MW with the screens in place. Screens were most effective for wind speeds of 20 mph and below. 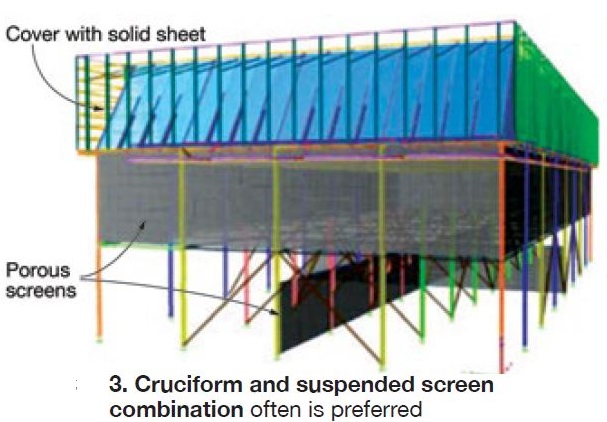 Both units were later subjected to CFD modeling for possible improvements, testing a wide range of screen configurations—both ground-based and suspended.

Bianchini’s presentation provided extensive modeling details including variations in screen type and placement. Adding to the complexity, the two ACCs (windscreen options and configurations) could be studied and upgraded independently.

One interesting takeaway was visual representation of the seemingly abundant options.

Two negative effects of wind on traditional ACC performance are recirculation of hot air exiting the ACC, and reduced fan air flow attributed to disturbances at the air inlet. “With the W-style ACC,” explained Louagie, “recirculation is reduced due to higher exit air velocity, and the fan inlet is protected from crosswinds by the tube bundles, acting like screens.”

“Flow-accelerated corrosion can also be reduced,” he explained, “due to lower steam velocities and less steam pressure drop.”

What might be of particular interest to owner/operators is that the ACCUG’s 2020 meeting, Sept 28-Oct 1, at the Danbury (Conn) Crown Plaza will include a tour of CPV’s Towantic Energy Center, which features and induced-draft ACC (Fig 4). 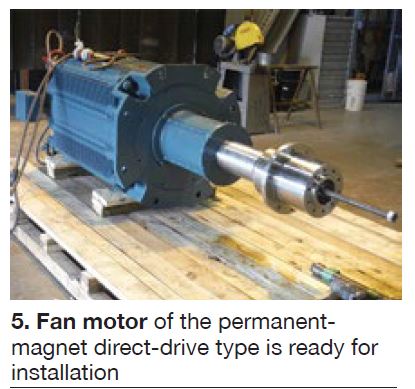 Environmental issues (including noise) and parasitic load (efficiency) were also discussed for the new design.

Dry Fork’s prototypes were installed in 2015 and 2016, both rated at 250 hp at 104 rpm. Mates also reviewed the installation challenges and solutions for a recent installation in Jordan.

George Budik, global product manager for ENEXIO Dry Cooling, explained that water demands continue to rise, offering an example for plants with evaporative/wet cooling systems. “Each 1 MWh of electricity produced in a fossil power plant requires 600 to 660 gal of makeup water to replace wet cooling-tower losses by evaporation, blowdown, and drift,” he explained. There is, therefore, a trend toward at least considering “conversion to all-dry or hybrid cooling technologies.”

Budik then explained various options, including what he called “the optimum solution,” cautioning that each design is site- and system-specific.

One approach is low-temperature thermal storage (LTTS, Fig 6) in which a water-cooled condenser (WCC) is combined with a thermal energy storage (TES) tank and air-cooled heat exchanger (ACHEx). The goal is to “exploit the natural ambient temperature variations to condense steam at sub-ambient temperatures.” 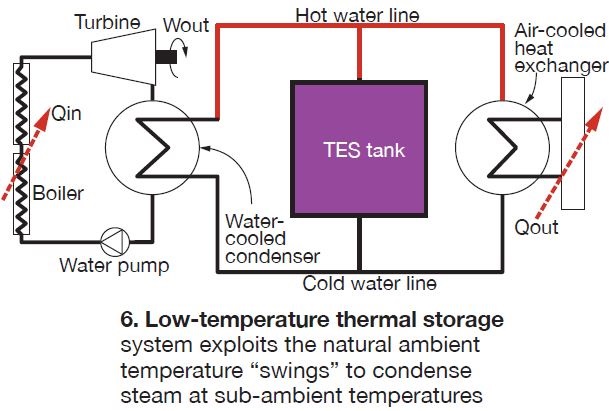 Feasibility studies and modeling for this concept are ongoing. One noted case study operated at eight hours of charge, eight of bypass, and eight of charge. Modeling results were explained.

Cleaning is a must

He offered a rule of thumb: “A general rule says that the total power generation will drop 0.7% for every 0.3-in.-Hg pressure increase at the turbine exhaust.”

Sample cleaning/fouling loss calculations were made available to all attendees in Excel spreadsheet format.

For a thorough review of cleaning needs and options, download at no cost Report ACC.02, “Guidelines for Finned Tube Cleaning in Air-Cooled Condensers” at http://acc-usersgroup.org/reports.

All are common discussions at the ACCUG meetings.

Howell noted that “a variety of performance improvements are available and should be evaluated for cost effectiveness.” In particular, he mentioned fan uprates, including some common uprate results for a specific scenario: