How to configure controls for economic steam dispatch 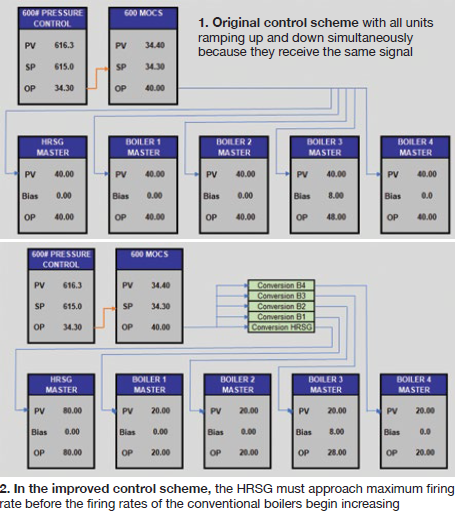 On an incremental basis, producing additional steam via the HRSG duct burners is more efficient than from the boilers. Reason: Sufficient preheated air already is available for combustion in the HRSG and only additional fuel (no additional air) is required to produce more steam. The HRSG’s efficiency advantage makes it more desirable to maximize steam production using the duct burners than by raising the firing rates of the conventional units.

For the BASF Geismar site, the output splits were adjusted as shown below:

Note: A minimum firing rate of 20% is maintained on the conventional boilers to prevent overheating of superheater tubes because of inadequate steam flow.

This split range scheme allows the HRSG, the most efficient steam producer, to be loaded first and unloaded last thus providing steam to the site in the most cost-efficient manner.

Challenges overcome. Because the firing ramp rate for boilers using the new control scheme is more aggressive than previously, consideration had to be given to the boiler controls to ensure they could handle the increased ramp rate.

Results. The efficiency advantage of the HRSG over the four conventional boilers is about 8%, which at this site amounts to about 124.4 Btu/lb of steam produced. Moving 60,000 lb/hr of steam production from the boilers to the HRSG results in an annual fuel saving of about $195,000, assuming fuel at $3/million Btu.

Only DCS programming was required to make this improvement (no new capital was required). While not a huge savings relative to the size of the site, this savings will occur year after year and will increase as fuel prices inevitably rise again—all for just a few hours of programming and test time.