Unlike many user-group events, the 2021 Combined Cycle Conference for the Middle East/North Africa (MENA) region began with a primer on combined-cycle facility design, which set the stage for detailed presentations on gas-turbine, steam-cycle, and balance-of-plant upkeep, repair, and upgrade techniques and technologies. Perhaps the only major subsystem omitted was steam/water treatment for maintaining proper cycle chemistry.

Joel Holt, operations manager at CoreTech’s Plant Systems Div, kicked off the conference with a presentation on combined-cycle plant basics. The editors consider this must viewing for folks new to the industry and a worthwhile refresher for veterans.

As one example, Holt compared a 2005-vintage combined cycle to a 2020 facility, and the contrast is stark if you haven’t thought about it for a while: A two-hour hot start versus less than 30 minutes today, around 50% efficient versus 62+%; steam turbines and HRSGs designed specifically for combined cycles (rather than designs lifted from other applications), and features like purge credit and system simulation not even available 15 years ago.

HRSG. Raphael Stevens, John Cockerill (formerly CMI), began with a review of his firm’s 200 years of industrial experience and an install base of 800 horizontal, vertical, and once-through HRSGs (amounting to 120 GW and 10% of the world HRSG market, he claimed).

Stevens gave examples of recent projects, including HRSG modifications to match the boost in output from a GT upgrade at Kings Lynn Power Station in the UK (Fig 1), and for one of the world’s largest desalination plants, a new low-pressure module added between the HRSG and stack (Fig 2) reduced stack temperature from 352F to 273F, thereby increasing water production and decreasing CO2 emissions. 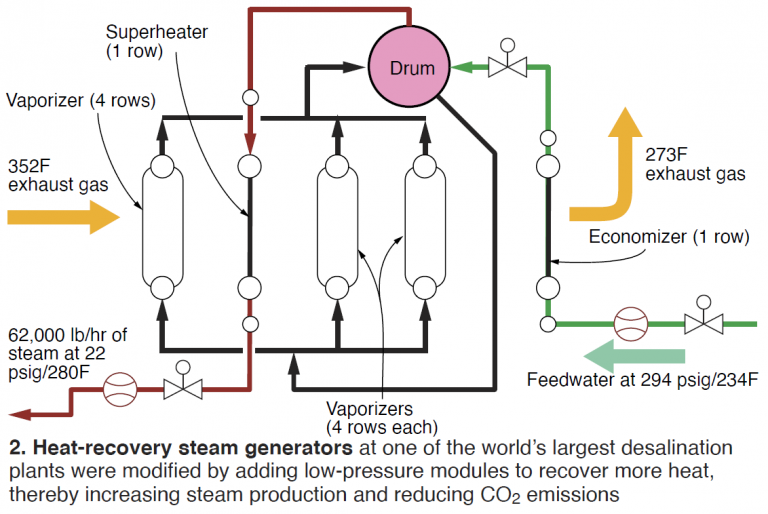 Johnston’s presentation is replete with nuggets of insight. For example, he stated that exhaust thermocouples on GE units were biased high between 1980 and 1997 and can be corrected to improve performance. And some replacement hot-gas-path (HGP) parts are actually upgraded (superseded) components which can qualify for higher firing temperatures.

He also discussed a “tilted control curve” which can allow you to overfire on hot days to boost output, and underfire on cold days. Normally, the GE control curve maintains constant firing temperature for all ambient conditions. 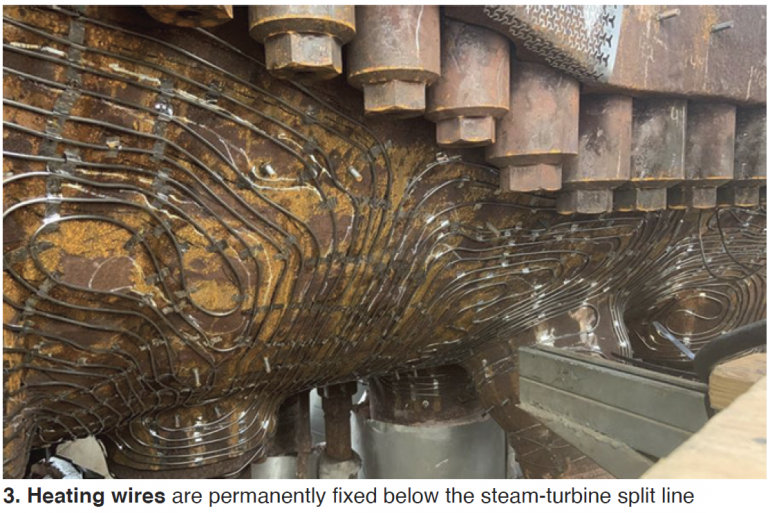 Steam turbine warming. Pierre Ansmann, global head of marketing for ARNOLD Group, presented on his firm’s advanced single-layer turbine warming system (Figs 3 and 4). This is must viewing if you’ve never thought that hard about steam-turbine insulation and their support and casing-attachment systems, differences between bottom and top insulation (25% thicker on the bottom, removable on the top side), casing heaters and attachments, and advanced controls which ensure every heating zone is controlled to within 1 deg C. Arnold guarantees that insulation surface temperatures do not exceed 15 deg C above ambient, and the unit is “hot-spot free.” 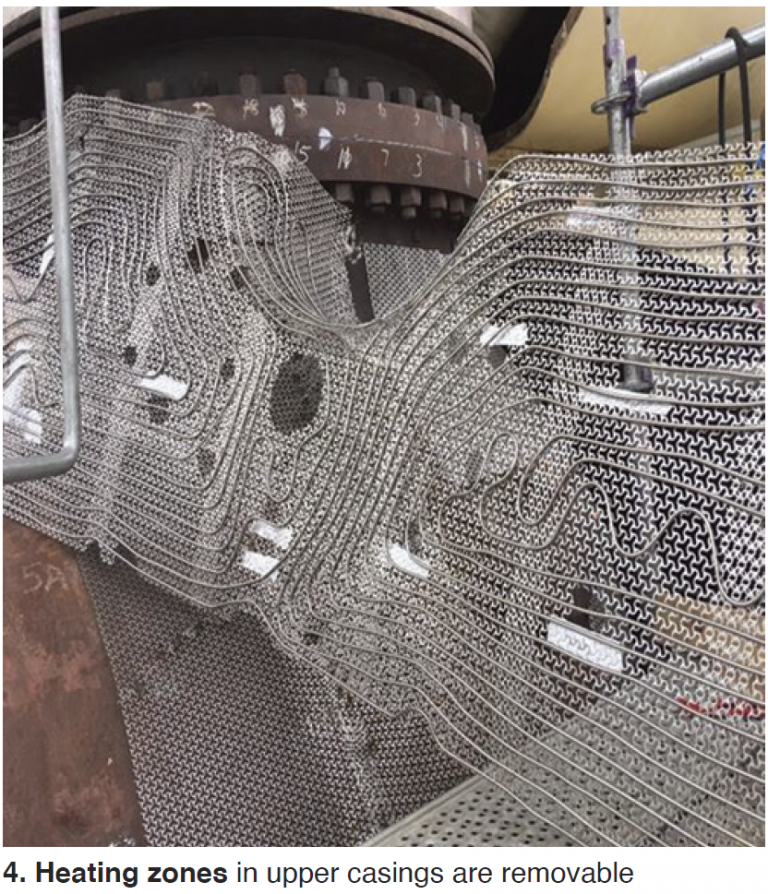 Because “performance always changes with plant cycling and ambient conditions,” Anthone dwelled on the need for regular testing (for example, vacuum leakage test), inspections (including drones) by specialists, and/or an ACC360 continuous monitoring and diagnostics (M&D) service program so cleaning and repairs can be properly planned, rather than forced.

“Data-driven analysis combined with thermal modeling can detect failures before they occur,” Anthone said, “which can increase reliability during adverse ambient conditions.” He offered brief case studies, one of an 800-MW plant that increased ACC thermal capacity to accept higher steam loads, in which all motors/gearboxes were replaced and upgraded without changing fan blade geometry.

GT repairs. Jason Brown, senior VP of business development, Allied Power Group, called his firm the “largest independent GT repair company in the world” as a result of “many acquisitions over the last few years.” He then noted the 3100 transition pieces sold for all GE frames through the 7FA.04, the 1900 combustion liners/CCP assemblies sold, and other components, some of which he said are better than the OEM’s for repairability. Repairs—including rotors—can be conducted on most GE and Siemens/Westinghouse machines.

Coatings are a “primary competitive advantage” of APG’s offerings, and are equivalent or superior to the OEM’s, he added. “We have 12 coating booths in operation and each of them can handle all necessary components.” The field services group can manage up to 10 outages at one time. One of the case studies presented involved the life extension of a crude-oil-fired GT, now expected to achieve a 12,000-hr inspection interval, whereas before the interval was far shorter.

High-end filter media are also easier to clean, too. No compressor washing is necessary and the machines remain “completely clean” after 5000 hours. “Washing really only cleans the first-stage blades,” he said. Changing from an F8 type filter to an E11 or E12 can “dramatically increase performance and reduce outage work,” Thompson concluded.

Neil Jones spoke on steam-turbine inspections and repairs for what he termed “almost all OEM- manufactured equipment.” He included a case study from 2020 in which a bowed rotor was straightened from 16 mils to 4.

If you didn’t realize that an inspection and recommendations report for steam-turbine valves could run 60-120 pages, listen to Jason Wheeler’s presentation to find out why. One of Wheeler’s stats: 75% of overspeed events are caused by improper valve operation. Depending on the aggressiveness of service, these valves must be inspected every three to five years.

James Joyce covered generator stator and rotor repairs, and began with a primer on generator components. Much of his material addressed the question: “Should I re-wedge or not?” When the answer is “yes,” MD&A can handle in-kind wedging or upgrades, he said, “which can be beneficial but very labor intensive.” Several options and tradeoffs must be considered, which is why you may need to call in specialists. Re-wedging takes 8-10 days and does increase outage costs. Core tightness checks and frequency bump tests should be included the project.

Michael Broggi addressed dealing with obsolescence of, and adding selective upgrades to, generator controls and excitation systems. Modern systems can include high-speed data capture and storage for troubleshooting. “This goes beyond PI data because faults are often in the milliseconds range,” he stressed.

Through an acquisition, MD&A now offers the IBECS® “fully integrated” control platform in which all HMI is encrypted and the system is “set up to be cyber-secure, with native drives and open-source protocols and features such as advanced alarming, pattern recognition, time synchronization, sequence-of-events recording, high-speed trending, and remote access and monitoring.”

The underlying messages from GE Day at the MENA Combined Cycle Power Plant Users Symposium was that, regardless of which region of the world you operate in, (1) mission and operating changes are coming to your plant, and (2) GE Gas Power specialists can help you analyze the impact of those changes on your equipment, recommend solutions, and implement them.

Jeff Chann, business intelligence leader, took the highest-altitude perspective and presented on the global industry transformation. The push to decarbonize a global economy essentially built on fossil fuels over a hundred year or more period will impact all gas-fired facilities.

As renewables grow, combined cycles not originally designed or built for cycling will have to be modified to do so. And unlike other regions, MENA’s electricity demand is still growing at a rapid pace. “One-billion people on this planet still need electricity,” Chann reminded his audience, and that need has to square with decarbonization.

Sholes noted that addressing the limitations on the balance of plant from a gas-turbine uprate will likely cost only a fraction of the GT uprate. He said GE specialists can analyze your plant’s performance and goals and recommend upgrade options. One example: If your attemperator valves are topping out, analyzing the operating data could reveal that relatively minor modifications can address this and eliminate water hammer during load transitions.

The following presentations then drilled down to the generators, HRSG, and steam turbine. They are available on the OEM’s MyDashboard website.

Generators. Karim Bakir, lead customer service engineer, EMEA Region (Europe/Middle East/Africa), reviewed generator maintenance practices and lifecycle issues, especially after the onset of cycling. Generally, he said, users need to consider a rewind for the rotor after 15 to 20 years, and for the stator after 25 to 30 years. However, cycling duty may accelerate those schedules.

The speaker explained how the field defect (ground fault) was ascertained based on GE diagnostic experience and fleet know-how. Detailed review of the observed findings identified what caused the ground-fault event. Plus, the presentation highlighted how GE was able to provide the field owner the best service option, including a spare field, to minimize generator downtime.

The HRSG presentation, led by Vasileios Kalos and delivered by Mohamed Hamdy, lead customer application engineer and Salim Kassis, senior sales manager, reviewed the replacement of pressure parts to extend life and reduce O&M costs—with an emphasis on upgrading from carbon steel to Gr11 alloy. Details were also given on GE’s pressure wave plus technology to address HRSG tube fouling.

Recall that pressure wave is an offline cleaning technique which uses controlled acoustic shock waves, or “bangs,” to knock debris off the tubes. A total cleaning on an HRSG serving an F-class unit takes about four to six shifts. For every inch water column of backpressure increase, the plant typically loses 0.2 MW of output and 0.1% heat rate. GE recommends that tubes be cleaned when backpressure reaches 3-in. H2O above specification.

Steam turbines. Matt Foreman, combined-cycle steam-turbine fleet leader, and Salim Kassis, delivered observations and findings from the product service team on impacts when units shift to low load and cycling service. Sites need to understand what these impacts can be, monitor for them, and engage in long-term mitigation planning.  A few examples cited:

GE spoke to solutions that range from upgraded replacement components like NextGen Valves and Advanced SteamPath to basic repairs to mitigate impacts of low-load and cyclic operation, but monitoring, diagnostics, and planning are critical.

The last presentation reviewed how analyzing operating data can help diagnose and identify emerging steam-turbine issues, flag minor problems before they become big ones, and inform maintenance planning. For example, when tracking the difference between the upper and lower turbine-shell metal temperatures, a delta T trending high from shell top to bottom indicates a higher risk for rubs. This can be addressed by checking for quality of insulation and ensuring proper installation of insulation. Changes in transient vibration over the unit’s operating life may help diagnose rotor bowing, as another example.

Such changes can be very gradual over time but nevertheless meaningful for diagnostics. The speaker suggested that users lacking the necessary expertise consider subscribing to GE’s OSM monitoring service.