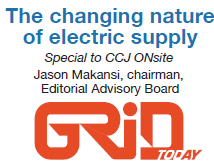 What’s happening inside the fast-growing, hugely profitable, digital behemoths—one characterization is the “Big Five,” namely, Amazon, Apple, Facebook, Google, and Microsoft—may be more important than what the electricity industry sees from the outside.

We know they are driving the industry towards renewable energy through direct investments in solar and wind facilities and green electricity purchases. We know they are pushing products and services for electricity consumers, such as smart thermostats and home automation devices, to manage demand to lower levels.

One of these firms, however, has an array of internal programs and policies which may be astounding to many. For example, the company burdens (think of it as a tax or penalty) every business unit with a price for carbon that is 40% higher than the prevailing market price.

Corporations charge business units for a variety of “services”; in some cases, these are called “indirects” on the unit accounting statement. But an internal carbon tax is something different.

This becomes a powerful incentive for executives and directors to drive towards a progressively lower carbon footprint. The taxes collected are then directed into a clean energy fund, used to support innovation and technology which reduce carbon and leads the company to its carbon neutral goal.

If that’s not enough, this company, according to a presentation delivered at the Ten West Innovation Conference in Tucson, October 2017, also is beginning to take on the carbon burden associated with customers for its cloud-based services.

The internal cost of energy at this company includes not only, for example the cost of utilities or the cost of an airline ticket, but also the cost to offset the carbon associated with both. Carbon impact becomes a line item in the budget for every business unit. Electricity consumption, however, is the primary source of carbon emissions for its internal operations. Another metric being considered is “emissions per housed employee (direct and contractors) per square foot.”

It doesn’t take a genius to see that such a program can drive behavioral changes far beyond the company itself as well as drive demand for energy-efficiency and demand-management related products and services. According to a company white paper, moving customer services to the “cloud” in itself can reduce energy use and carbon footprint by at least 30%.

Employees also are encouraged to find ways to reduce carbon impact for the company and in their personal lives, including use of mass transit, energy conservation, organic farming, and local resources. It would seem straightforward that the other digital Big Five firms, and the second and third tier firms, are implementing similar programs internally, since they would benefit in similar ways.

Traditional electricity industry players need to take note: Sustainability and carbon neutral programs are more than slogans, suggestion boxes, and thick documents written by consultants sitting on shelves in the C-Suite. For these digital firms, they are driving productivity and profitability. And their profitability is undoubtedly going to be revenue losses for traditional players.