Miguel Perez Ghisays, general manager of the privately held Termocandelaria peaking facility near Cartagena, Colombia, and his talented staff, embrace a process of continual improvement in all facets of operation and maintenance.

Readers may recall the plant’s success in converting its two W501FC engines from gas-only to dual fuel in only 11 months after contract award and the upgraded fuel system’s outstanding performance during a difficult period when the country was subjected to an El Niño weather pattern.

Recently, Perez Ghisays contacted the editors about improvements made to the closed cooling systems serving the gas turbines’ generators (Fig 1)—one a hydrogen-cooled (Unit 1), the other air-cooled (Unit 2). The heat-transfer medium in both systems was a glycol/water solution, which makes perfect sense when the ambient temperature drops near or below freezing. 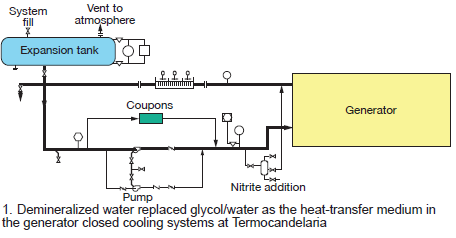 But Cartagena has only one season, with average temperatures above 70F; it never freezes there. Staff found that the specific heat capacity of glycol/water solutions is lower than that of demineralized water, meaning the latter can absorb more thermal energy and increase heat-transfer efficiency. Plus, conversion to demin water-only would eliminate the significant expenses associated with glycol use. After the switch to demin water was made, more favorable temperatures at the system inlet and outlet confirmed the heat-transfer benefit.

With demin water as the cooling medium, Perez Ghisays said, it became necessary to consider corrosion control. Generally speaking, closed systems can suffer corrosion and fouling problems absent adequate chemical treatment and water management. Corrosion can attack system components or dissolve metals in one part of the system and deposit them elsewhere, the general manager continued. And if deposition occurs on heat-transfer surfaces it can cause restrictions in critical flow zones.

To assure proper water treatment at Termocandelaria, plant engineers designed equipment to inject chemicals directly into the closed cooling system. The chemical addition tank shown, designed for use at system pressure, enabled both acid washing after the glycol/water solution was removed as well as ongoing chemical treatment of the system’s demin water. The acid-wash step took about three days.

Analysis of the cooling-water systems revealed high levels of iron. An engineering review pointed to the vented carbon-steel expansion tanks in both generator cooling systems as the primary source of these corrosion products. Replacement with tanks made of Type 316 stainless steel resolved that issue.

Perez Ghisays and his staff decided that fouling and corrosion should be monitored to gather solid evidence of chemical effectiveness. Corrosion coupons are used for this purpose and are evaluated periodically. Results from the first round of tests are presented in Tables 1 and 2. They compared favorably with corrosion data in Table 3 for mild-steel and copper alloys available in the literature and considered “excellent” (negligible corrosion). 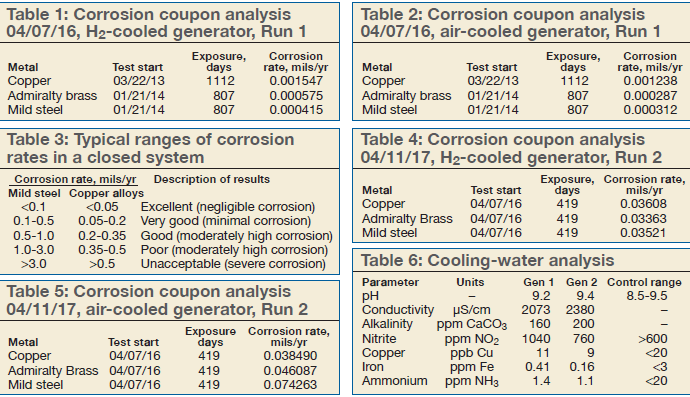 Corrosion data from the second round of tests (Tables 4 and 5) were similar to the first-round results. 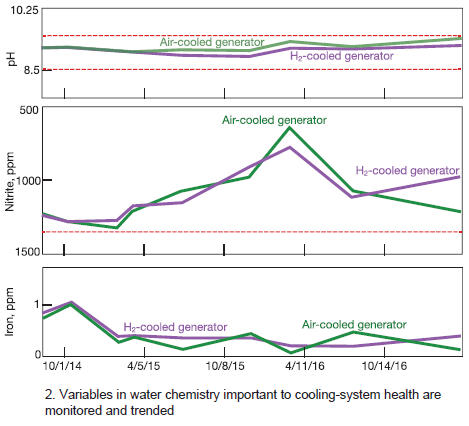