The user-only compressor session in 2018 didn’t include any new topics, at least while the editors were in the room. At most 6B meetings, discussions include filter experience (HEPA in particular in recent years), online and offline washing, corrosives and particulates in the air impacting compressor cleanliness (and how to remove them), inlet bleed heat, bearing damage, clashing experiences, coatings, etc.

Proven coatings, when applied correctly, can offer meaningful economic upside. A compressor that remains clean year-round without washing minimizes performance loss (a topic incorporated into the Monday workshop conducted by John F D Peterson) for the entire run cycle, virtually eliminates the cost of demin water and soap for washing and any expense and permitting associated with wastewater disposal, and eliminates any operating penalty that might be associated with washing.

While the Frame 6 Users G 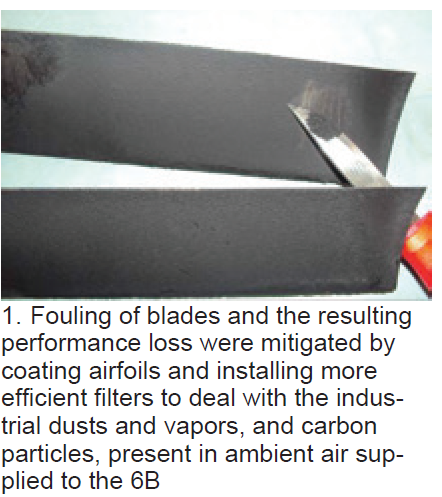 roup attracts some offshore attendees, the large majority of 6Bs is located outside North America and the experiences of those owner/operators generally are not shared at the US meeting. CCJ’s international activities, which include participation in the best practices program organized by the European Turbine Network (ETN), brought to light coating experience at a Scandinavian industrial facility that might benefit others.

That plant was challenged to reduce fouling-related degradation of 6B performance caused by a harsh coastal refinery environment containing salt, dust, soot, etc. The airfoil shown in Fig 1 was not washed prior to a major inspection after 40k hours of service. Plant management was reluctant to perform online or offline compressor washing given the possibility of engine tripping and/or other problems during restart, as well as the possible negative environmental aspects of water use.

The stainless-steel compressor blades were cleaned and coated with the anti-fouling treatment AFT from United Services Sweden AB during a major overhaul in 2011. No fouling-related degradation was in evidence after 56k hours of operation (seven years) with annual washing only (Fig 2). The photo shown in Fig 3, taken after spraying water on the compressor blades, shows that the coating’s hydrophobic properties remained intact.

The DLN-equipped engine normally operates baseload, dialing back output only when steam demand is low. Inspection and water washing of the GT is done during the annual maintenance period for process equipment. An HGP inspection is scheduled for the engine every 24k hours; a major is done at 48k intervals.

The editors communicated with the plant manager (PM) by email to get the details that follow. The plant learned about United Services’ coating through discussions with other users in Scandinavia. One member of the collaborative group of owner/operators had used the coating on his IGVs with positive results. The PM said he reviewed that experience, as well as laboratory test runs, before putting AFT on IGVs and first-stage rotating blades of his 6B about three years before the 2011 major. His trial showed that fouled airfoils were cleaned simply by washing with demin water.

United Services both cleaned and coated the compressor section in the plant shop without removing blades from the rotor. This work took four days and had no impact on the outage schedule.

The PM said he expected the coating would retain its dirt-repelling properties for the entire period between consecutive majors and that was confirmed by inspection. However, an additional coat of AFT had been added to the IGVs and first-stage blades after a couple of years of service. The recoated rows were viewed as easier to clean with demin water (no soap).

Compressor performance degradation was said to be “considerably less” after the coating was applied and air inlet filters were upgraded. The PM said the 4-MW loss experienced between annual shutdowns with uncoated blades dropped to 1 to 1.5 MW after coating and installing filters offering more efficient capture of fine particulates.

F7 filters allowed the fouling shown in Fig 1, so they were upgraded to HEPA, which are changed triennially. Both prefilters and fine filters are installed; G4 and E11 ratings, respectively.

The inlet plenum later was coated with AFT to smooth out air flow to the engine and contribute to performance improvement.

A new uncoated rotor recently was installed in the 6B; the original was retired after about 200k hours of service. The PM said he would use this opportunity to monitor performance degradation between annual outages to determine the impact of better filtration with uncoated blades.