Many combined cycle (CC) turbines working in more and more aggressive operating regimes face the added challenge of shrinking O&M budgets. From an accountant’s view, fewer operating hours for older machines equates to less need for O&M funds, however wrong-headed that may be from the deck-plates view. Thus, the hunt for less expensive but reliable, and potentially even superior, component repair services and providers continues unabated. 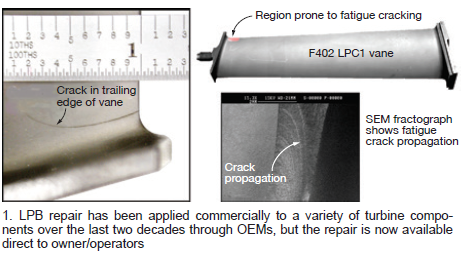 LPB may be unfamiliar to many CC facility staff because it traditionally has been applied private-label, so to speak, through OEMs and other non-OEM services firms. Now, Lambda/Surface Enhancement Technologies (SET), Cincinnati, Ohio, which possesses the patents, intellectual property, machines, and tooling, and two decades of shop experience, is offering LPB-based repairs directly to owners/operators. The company traditionally had been focused on the aviation and defense industries.

LPB has been specifically proven in the field as an effective repair technique for CC plant applications including, but not limited to:

A representative of one 7F owner/operator told the editors that they tested several LPB-repaired R0 blades. . .“ran the hell out of the units” and the blades performed well.

In aviation, LPB has been applied repeatedly for similar damage mechanisms to at least a dozen major components of aero gas turbines—including blades, vanes, and discs at multiple stage locations. Many aeroderivative gas turbines in power applications are based on stationary versions of these same machines.

EPRI conducted a study several years ago with LPB and a competing technique, laser shock peening (LSP), applied to gas-turbine compressor blades subject to erosion, corrosion, and impact damage—especially in machines with evaporative coolers and direct water injection and fogging for boosting turbine output. Lambda/SET did the LPB work for this program.

CCJ ONsite covered early results with a rotor through-bolt LPB repair in “Siemens meeting focuses on issues, solutions, technology developments for large frames.” As noted in that article, “Because the most recent bolt fracture occurred on a rotor that had some mitigations applied, robust discussion ensued regarding the effectiveness of those mitigations as well as on the latest recommendation of low-plasticity burnishing. LPB is a surface treatment intended to greatly improve a through-bolt’s margin against both fretting and HCF crack initiation and propagation by adding a deep compressive residual stress field to the bolt surface.”

A review of LPB testing was provided at Siemens Energy’s first customer conference for F/G/H owner/operators in September 2015. It reported favorable results on fatigue resistance tests and open actions for additional ongoing tests—such as material debit and thermal mechanical exposure.

In some cases, owner/operators can reduce the number of times a set of parts (blades, vanes, etc) needs to be overhauled, and correspondingly the amount of time the unit has to be shut down for the work. For example, test results presented at PowerGen 2019 show that R0 blades nominally exhibiting only 0.008 in. erosion damage tolerance without any surface treatment can be LPB-treated to increase the damage tolerance to a 0.040 in. depth and be reused instead of being replaced. This could lead to the huge cost benefit of reducing the total number of shutdowns for this repair from five to two over the service life of the compressor blades.

Simply, in the LPB technique, a ball or rounded wheel is pressed into the component surface to deform the surface layer in tension, so that the material is left in residual compression after the tool passes (Fig 3). The required magnitude and form of the residual stress field are achieved by controlling the force and tool position. It is purely a mechanical repair.

LPB was honored as a NASA Spinoff technology for 2010 and earned recognition as one of the “R&D 100,” a list of the top 100 inventions of the year. An article on NASA Spinoff’s website with the unlikely title, “Burnishing Techniques Strengthen Hip Implants,” notes some of the important product outcomes of LPB:

“Capable of being applied to all types of carbon and alloy steel, stainless steel, cast iron, aluminum, titanium, and nickel-based super alloys, and many components with odd shapes or forms, LPB can be performed in a machine shop environment, in the field, and by using robotic tools. One important feature of the LPB application method is that it is highly controllable and can be validated to ensure that the process is applied to every part.”

Other attributes of LPB, compared to other options, are: