A combination of ultrasonic energy, AM radio-frequency waves, and sun shades managed to tame severe algae growth in the cooling tower at River Road Generating Station, according to Operations Manager Justin Hartsoch, GE Gas Power O&M. He told participants in the 2021 conference of the Combined Cycle Users Group (virtual) that algae blooms became a problem after the plant was compelled to shift from chloride to a bromine-based treatment to meet EPA NPDES regulations.

In a moment of levity, Hartsoch called the collected algae a “non-cash crop” (Fig 1), but also noted that the plant’s “unique algae bloom is seasonal.” Well water is the source for the plant.

The biocide formula that was being used also fed on silica, creating resistant algae which would coat the forebay trash screens, and require cleaning every two to three days. So, the plant undertook a campaign to identify a non-chemical approach to algae control. The solution to date (“the story is not over,” Hartsoch said) has proved to be the following:

Details of this unique cooling water treatment approach, the theory of design, the circumstances which led to it, and the subsequent results and benefits were reported last year in CCJ. In the CCUG presentation, Hartsoch did note that the payback was a year and a half.

E.C.O. filming technology. Another “cash crop” tale emerged a few presentations later. Greg Boileau, Suez Water Technologies and Solutions SA, described a new proprietary, non-phosphate, circulating-water treatment based on E.C.O., an “engineered carboxylate oxide” filming technology (Fig 2). Phosphates are being phased out because of deposition challenges and formation of algae in receiving waters. Boileau said that one pound of phosphate can lead to 500 lb (wet) of algae. 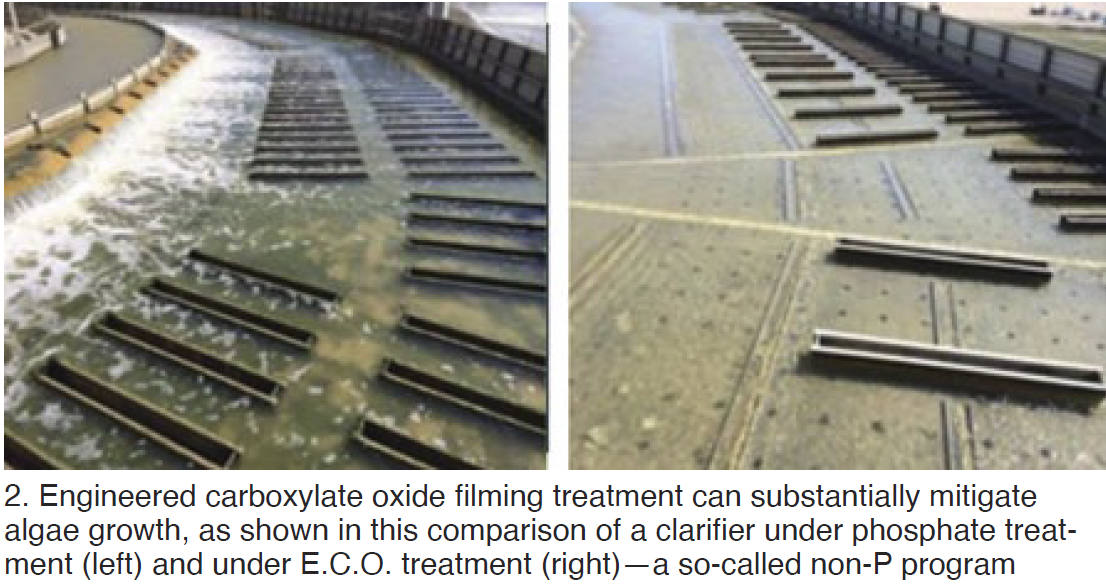 Boileau reviewed the key drivers for reducing phosphates, sources of phosphates in the plant water balance, and several case

studies. Much of the return on investment comes from avoiding the capital cost of a phosphorus removal system. Other Suez information online suggests the proprietary technology reduced phosphates by up to 80% in the pilot study at a large gas-fired plant while maintaining acceptable mild-steel corrosion rates.