Powerplants built over the past several decades are packed with instrumentation, transmitters, and computers. This extensive automation has allowed reduced staffing levels while introducing challenges for effectively analyzing and acting on degrading conditions that may occur long before alarm levels are reached.

Many combined cycles use all, or portions of, remote monitoring and diagnostic (M&D) support. Having had remote M&D experience at other plants, the Fairview staff wanted to share some tips gained while operating under the comprehensive M&D program established by owner Competitive Power Ventures.

CPV thought it important to contract M&D as a service offering, as opposed to purchasing software to use in-house. Knowing that plant teams are running lean, with each team member already playing a strategic role, the manpower required to learn and maintain new, complicated software wasn’t readily available. The M&D services contracted both compliment and augment Fairview’s in-house capabilities.

The plant team recognizes the service offering is a dynamic and adaptive process that can be improved as lessons are learned. Communication with the service provider is a “two-way street.” Staff doesn’t hesitate to ask the provider for help diagnosing symptoms or adding specific logic that might not have been included in the original setup.

Outsourcing M&D as a service has several advantages, including the following:

Staff welcomes the benefits offered by a remote M&D tool that ultimately supports the team in generating power safely and reliably. Using the major equipment OEM to provide M&D services has the additional advantage of leveraging specific fleet lessons into the software that monitors for known adverse patterns. Plus, it allows for the consolidation of all issues into one platform where they are tracked and discussed on a regular basis. Recommendations that come from the OEM through the platform have the advantage of access to the OEM’s bench strength.

In another example of how subtle deviations are picked up by the remote service, the trend plotted in Fig 2 shows process flow versus valve position. The software has identified a subtle variance in which no flow is observed with the valve slightly open. Cases like these are flagged and discussed with the plant team in regularly scheduled meetings. 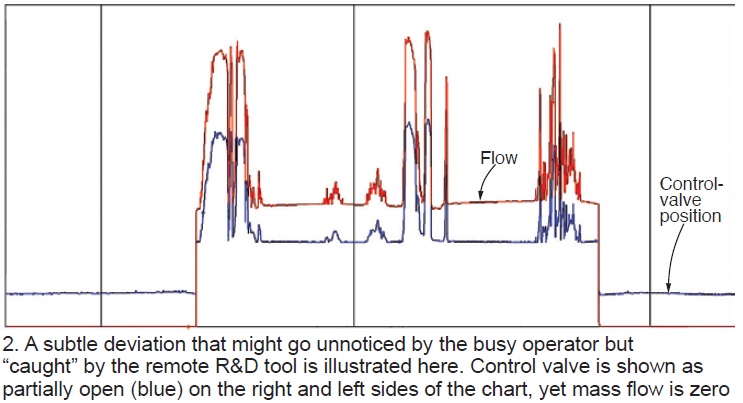 While some deviations may be minor issues, if the valve in question is inlet bleed heat, for example, it may be robbing output or not protecting against compressor icing if left unchecked. Symptoms like this can be difficult for humans to catch, particularly when they are tasked with overseeing several thousand data points across multiple DCS screens.

M&D also serves as a tool to aid to help drive the scope of work for upcoming outages. Program effectiveness can partially be quantified by observing the number of actions items landing on outage planning lists.

Even though the M&D service is performed by the turbine OEM, the entire BOP is monitored as well for Fairview Energy Center and other CPV plants—including turbine heat rates, machine-specific efficiencies, and full plant performance. This service adds significant value even though performance calculations already are being performed in-house. A comparison of independent thermal models serves as a QA function and helps to confirm causal factors of degradation.

If you currently have a “turbine-only” option for remote M&D monitoring, it’s worth reassessing the value of “whole plant” remote monitoring.

Early detection of adverse conditions has reduced forced-outage hours at Fairview, and in at least one instance, prevented additional consequential damage to a gas turbine. Discoveries are shared by email in advance of biweekly planning calls to review new issues and track disposition of previous actions. The conference call includes M&D engineers, plant staff, and owner management collectively determining (1) which repairs can be deferred to outages, (2) needed parts, and (3) whether the work can be performed safely without shutting down.

Urgent symptoms are phoned in to the control room from the remotely staffed monitoring center, and in high-priority cases, a notification is sent to the plant manager, who recalls times at other facilities in which he was notified with a recommendation to immediately shut down.

In one instance, rotating turbine blades were losing material because of contact with stationary vanes. In another, compressor blades were damaged. In both cases, alarms had not yet activated, the adverse conditions having been caught by M&D software and the 24/7 remote monitoring team. Though there certainly is value in avoiding an imminent failure, the aim is to identify and address issues well ahead of failure, allowing staff to avoid or reduce forced outages by converting them to planned outages. This is what drives Fairview’s ROI.

During a recent cold-weather-induced event, plant staff initially struggled with a thrust-related steam-turbine alarm that was void of evidence to confirm an actual thrust condition. The only symptom preceding the alarm was a gradual reduction in turbine reheat outlet pressure. M&D engineers explained the alarm was a calculation based on the difference between inlet and outlet pressures and an assumed thrust.

Subsequent investigation revealed a sensing line had slowly frozen, resulting in a gradual decay of reheat outlet pressure with the control system eventually closing the reheater inlet valves as a protective response. The decision to phone M&D early greatly reduced forced-outage time during a peak market period that could have otherwise resulted in steep financial penalties. The affected sensing line circled in red can been seen in Fig 3. 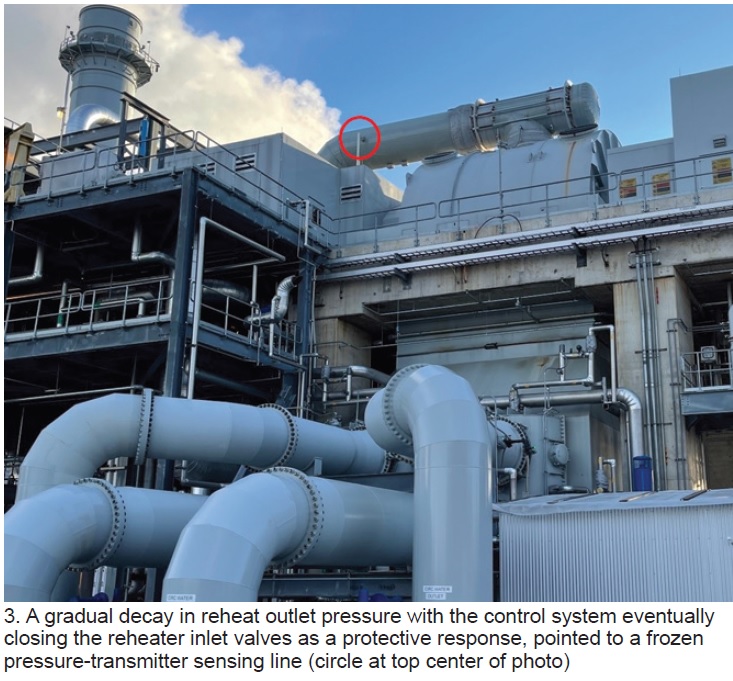 Relative to notifying M&D for urgent support, Fairview personnel recommend keeping the M&D phone number programmed in your cell phone along with each unit’s serial number. Staff can be overwhelmed with alarms. Remote M&D can confirm suspect causes and open emergency engineering cases for review. Having turbine serial numbers visible on your cell is very helpful—particularly when you’re at home and initiate a call for help in the middle of the night.

Other benefits of M&D include minimizing the time for identifying and managing thermal-performance degradation and better preparation for planned outages.