Exhaust systems are a presentation and/or discussion topic at most gas-turbine user-group meetings, particularly those supporting F-class and the more advanced frames. Cracking of components, broken struts, material distress, and leaks at joints are almost sure to occur in virtually any system handling a 1000 lb/sec or more of turbine exhaust at 1000F or higher and moving at near mach speed—especially so in starts-based engines with original equipment.

There was a period a few years back when the accepted “solution” was to have personnel standing by to make repairs during annual—or semiannual—outages. In meeting after meeting, discussion focused on weld material, weld configuration, welder qualifications, expansion joints, and related topics. It came to be that users able to restrict repairs to every other outage were recognized for their acumen by peers.

The effects of hot gasses leaking from cracks into areas where they could cause accelerated wear and tear and/or personnel hazards provided owner/operators the incentive to press for root cause analyses and resolve the problems through better design and materials selection. There was a lot of finger-pointing to be sure, mostly directed at the gas-turbine OEMs. However, that might not have been entirely fair given the limited industry experience available to guide the design of early F-class units.

The OEMs of record—Siemens Energy Inc and Mitsubishi Hitachi Power Systems Americas Inc—upgraded the designs of their exhaust cylinders and manifolds for the 501F series of engines to eliminate the issues experienced. These have been retrofitted at several plants, as discussed in some CCJ articles published over the last several years. They can be accessed by using the search function on the magazine’s home page at www.ccj-online.com.

Both plants, which began commercial operation in 2004, are 2 × 1 combined cycles powered by Siemens 501FD2 gas turbines. The utility plans to replace the exhaust systems on Silverhawk Unit A and on Higgins Unit 1 during their next major outages—provided upcoming inspections/evaluations confirm expected performance.

Background. The 501F exhaust system has two principal components: an exhaust cylinder, connected to the turbine case on its inlet side and to the exhaust manifold on its outlet side (drawing). The cylinder may be of single- or two-piece construction. PSM’s “drop-in” replacement is a horizontally split two-piece cylinder, the only option available for pre-501FD3 machines when they were purchased. This configuration typically is preferred by users because they can maintain their current maintenance practices in future outages. 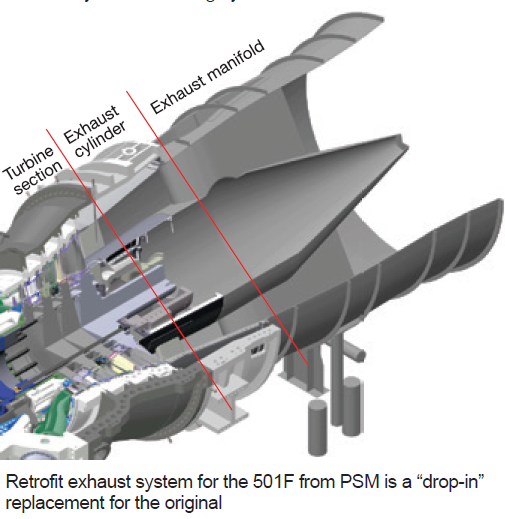 Depending on component dimensions, a spacer piece may be required downstream of the exhaust manifold to fit up with the heat-recovery steam generator. An expansion joint is located at the round-to-square transition between the manifold or spacer and the HRSG. In the case of a simple-cycle unit, there would be no HRSG and the manifold or spacer would connect via an expansion joint to the transition piece directing exhaust gas to the stack.

Exhaust gas also can overheat expansion joints, allowing them to leak and create safety and environmental issues. Repairs are time-consuming and expensive, and never “final.”

NV Energy’s engineering team had been following industry experience on 501F exhaust systems for years, while continually evaluating the condition of its Silverhawk and Higgins units, before deciding on a course of action for its assets. Amos said after receiving multiple alerts from the OEM and listening to owner/operator colleagues at forums such as the 501F Users Group (next meeting Feb 17-22, 2019 in Paradise Valley, Ariz), it was obvious that repairs are temporary and the only long-term fix is replacement of the exhaust cylinder.

Bearing drops on the four 501Fs at Higgins and Silverhawk were monitored by PSM. The relatively constant drop in rotor centerline position of Higgins 2 over time averaged about 10 mils annually. Silverhawk B experienced a more severe drop: about 15 mils per year on average.

With the future easy to predict, NV Energy engineers conducted detailed design reviews of replacement exhaust systems offered by the two OEMs and PSM. The company focused on reliability improvements and reduced maintenance promised by the offerings. Its goals were the following:

Major design changes by PSM (from the original exhaust system) to achieve the goals bulleted above were these: