Welcome the 7HA Users Group into the pantheon of power-industry organizations seeking peer-to-peer interaction to solve problems expeditiously and provide a collective check on official OEM positions regarding fleet- and plant-level issues.

Representatives from well over a dozen facilities and five countries, responsible for 30+ machines, attended the inaugural 7HA Users Conference, in Fort Worth, Tex, Sept 12-13, 2018. The table illustrates machine operating stats as reported by the participating owner/operators. Obviously, it is early days for the technology with respect to commercial operations. 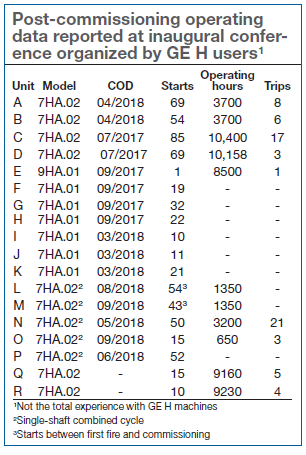 The scene was reminiscent of the early 1990s when the F-class technology emerged in commercial settings, dozens of units were sold worldwide, engines began operating before any appreciable operating experience had been gained with the fleet leaders, and before long, units were being air-lifted from around the world to have serious deficiencies addressed.

You can read about that experience in “Flaw in Design of Turbines Results in Massive Recall from Utilities All Over,” by William M Carley of the Wall Street Journal, May 6, 1996.

We don’t preface this article this way to create ill will among users and OEMs, but to remind the community that the evolution of high-energy, highly engineered, cutting-edge power systems is rarely a smooth process. To get to today’s landscape of F-class machines humming around the world doing what is expected of them, for example, the industry had to get through a tumultuous early to mid-1990s period which deeply affected all five major large-frame OEMs at the time. Now there are three.

What follows is an exclusive industry report from the 7HA Users meeting. All technical issues are described generically out of respect for the extreme sensitivity owner/operators face managing the OEM relationship. GE was there in full force, though, with the meeting structured as first day devoted exclusively to owner/operators, and the second day to the OEM response, followed by a plant tour. CCJ was invited to attend only the part of the OEM session that had nothing to do with addressing issues.

The material, to the extent possible, is organized in priority of fleet issues and/or issues affecting multiple sites. Then a punch list is provided—issues experienced by one or two sites. Learning through open and transparent discussions among the folks who live and die with the equipment is the fastest route to commercial success with the technology.

Keep in mind that the 7H machine has established new industry records for power output, efficiency, emissions, and turndown flexibility. These achievements were reported in an earlier article. 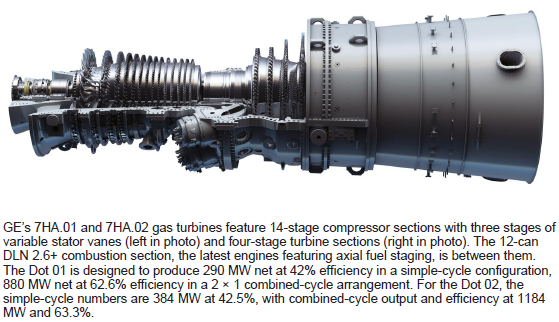 As if on cue to accentuate the importance of such conferences, the first speaker noted that one of its machines had, just days earlier, experienced a first-stage turbine (S1B) bucket failure after less than 10,000 operating hours. All four units (at two sites) being operated by this company were then shut down as a precaution.

Days after the conference, Reuters reported on September 20 that four GE HA-class machines in the US were shut down because of an “oxidation issue” and the company expected that all 51 machines shipped to date would be affected. The article also noted the fix, according to an OEM spokesperson, would require “minor adjustments.” Users at the meeting said GE had “acknowledged that this is a fleet-wide issue.

Others have reported that the oxidation affects a key alloy in the blade and shortens its life. GE, already dealing with existential corporate and Wall Street level complications, was dealt yet another blow by this event.

The bucket issue also has thrown into some turmoil the delivery schedule for machines to US customers, according many present at the conference. One, with a commercial operating date (COD) a few years out, said that the buckets destined for their machine, what were to be the first “Gen II” S1Bs, were now being diverted as replacements in the failed units. This action has postponed COD.

Users wondered aloud whether this “fix” would be the right one, since there is no commercial operating experience with Gen II hardware. The next opportunity to “look at them” in the first machine incorporating them, said the site representative, was not expected until a scheduled outage many months out.

Another operating site rep said the OEM was 9-10 months behind on spare parts and that they were “desperate for spare stage 1 blades,” and needed to “get through the fall on someone else’s blades.” A third site was expecting its S1B replacements in 2019. A fourth noted that they were getting a mix of Gen I and Gen II hardware. Finally, a site with several thousand hours on its HA.01 machines reported that the dampening pins for its first-stage buckets already had been replaced twice.

Some HA combustors feature axial fuel staging (AFS), of which a key component failed and caused damage at one site. The GT was operating at 298 MW when the failure occurred. It not only caused internal damage to the combustion system, but also breached a combustor can into the turbine compartment, triggering the fire protection system and tripping the unit.

As later elaborated on by a site representative, the DLN 2.6+ combustion system on such units consists of a fuel flow path referred to as “axial fuel staging” (AFS).  Fuel enters the GT compartment and passes into a ring manifold and is delivered to each combustion chamber via “pig tails.” Fuel then is equally distributed to four ½-in. tubes attached on the outside of the “Unibody” (but internal to the combustor), and injected into the hot gas path through four nozzles.

The idea behind this flow path is to introduce fuel gas downstream of the flame zone and just upstream of the turbine first-stage nozzle. The fuel gas auto-ignites, increasing the energy available for the power turbine but with no increase in NOx emissions. This also allows for extended turndown while maintaining emissions compliance.

At the site with the AFS tube failure (during normal operation), a flashback occurred causing complete disintegration of two fuel nozzles, damage to the Unibody assembly within the combustor, and some splatter impinging on the turbine first-stage nozzles and buckets within the quadrant of the failed combustor.

There was also a breach of the combustor wall. Hot gases entered the turbine compartment and triggered the fire-protection-system heat detectors, which also automatically initiated protective action of immediate unit trip.  Data review revealed that approximately 45 minutes before unit trip there was an instant spike in NOx, exhaust spreads, and low-band combustion dynamics.

The root cause of the AFS tube failure is unknown at this time pending completion of the analysis effort by the OEM.

One site with around 3700 operating hours on its HA.02 machines reported that they had been plagued with cold-start transient vibration and start-to-start vibration issues associated with bearing No. 3, which the OEM had recently acknowledged were fleet-wide issues. The presenter said that half a dozen other machines were experiencing similar problems.

The vibration levels increase over time, and are associated with thermal changes in the unit. Low-load operation makes it worse. The vibration is supposed to be below 5 mils, but at times has been indicated as high as 12 mils, and routinely is around 7. Perhaps the most aggravating thing is there is no real pattern to the deviations, other than they tend to be “stable” at baseload.

Numerous foundation checks by the OEM didn’t solve the problem, nor did attempting to correct the balance with strategically placed weights (“shots”). In fact, “placing the shots in the wrong places led to numerous fruitless iterations.” An hypothesis of coupling misalignment also has not proven out.

Excessive vibration leads to secondary issues, such as oil leakage at the deflector plate from one of the generator rotor bearings, terminal strips coming loose, and failures of exhaust-thermocouple attachments. “We are replacing many exhaust thermocouples,” one said. Another site experiencing similar vibration problems is testing a prototype thermocouple that may be more robust.

One site reported that they had changed out the seals on the leaking generator bearing, added a row of labyrinths, and made some other adjustments which appear to have corrected their problem.

Several attendees commented on the complexity of the H-class control system and the shortage of OEM control-system engineers familiar with the H machines. “Controls are really complicated,” one said, “whenever we do a logic change, GE doesn’t have enough controls engineers to support us.” Another worried that “the digital intelligence is not 100% developed” for these systems. A site experiencing only one trip blamed it on a fieldbus error in the control system and subsequently requested that the GT controls be hard-wired.

A third presenter complained that the original GT/G controls had no redundant vibration configuration and cautioned attendees to “be aware of the primary-frequency response logic for performance tests.” This site also had incorrect digital valve position (DVP) firmware settings resulting from miscommunication between the OEM and the sub-vendor. The presenter urged his colleagues to “be familiar with foundation Fieldbus and Profibus for controls as applicable to the Mark VIe GT control platform.

Those in the queue for their machines, and those considering ordering an H-class unit, will want to consider the following punch list of items discussed at the meeting. These issues have not risen to fleet level issues, or at least not yet, and some may be peculiar to one or two sites, placed in the general category of “teething” issues common to all new facilities, and may have shared responsibility with the EPC contractor.