Selective catalytic reduction (SCR) is widely used to reduce NOx emissions from gas-turbine powerplants—both simple- and combined-cycle units. Once the catalyst is installed it is important to monitor its activity periodically. This involves removing a sample from the unit and testing for its activity in a laboratory. Test frequency can vary from yearly to every two to three years, depending on site-specific issues relating to potential catalyst poisons.

This article discusses issues with testing SCR catalysts used in simple-cycle gas-turbine systems that are not addressed in the testing guidelines. The catalysts in simple-cycle units typically operate in a temperature range of 750F to 850F; more typically, 800F to 850F.

The authors focus here on measuring catalyst activity in the laboratory. Note that K varies with the chemical composition of the catalyst, its geometry (for example, mass transfer in the catalyst channels), and operating parameters (for example, temperature and area velocity). Area velocity (Av) is the ratio of flue-gas flow to the active catalyst surface area. Lower Av means more catalyst per unit of flue gas.

To determine catalyst activity, the NOx reduction is measured across the catalyst and its activity is calculated from the equation:

Laboratory test conditions typically are arranged to duplicate full-scale temperature and area velocity. The EPRI guidelines specify that the activity be determined at a NH3/NOx ratio of 1.2.

The challenge with simple-cycle SCR catalysts operating at relatively high temperatures (800F to 850F) is that reactions other than the basic SCR reaction can occur—as indicated by equations A to C below.

These parallel oxidation reactions of ammonia essentially compete for the ammonia that is injected and used for SCR NOx reduction. For instance, the EPRI GT SCR catalyst testing guidelines specify that an inlet NH3/NOx ratio of 1.2 be used to measure the activity. If ammonia oxidation reactions described by equations A to C are taking place in parallel, then the ammonia available for the SCR reaction (Eq A) is less than the NH3/NOx = 1.2 injected as specified in the guidelines. This will result in a lower NOx reduction and an artificially low activity K. If not accounted for this can lead to a premature recommendation to change the catalyst.

It is not the authors’ purpose to discuss what catalyst formulations and properties promote these oxidation reactions. Rather, some typical examples presented below show the impacts of the oxidation reactions along with recommendations on how to deal with these issues during laboratory testing.

The following discussion focuses on laboratory tests of SCR Catalysts A and B. Fig 1 shows test results in terms of NOx reduction and NH3 slip as a function of the inlet NH3/NOx ratio for Catalyst A at 850F and an area velocity of 10.8 m/hr.

The following observations are noteworthy in this figure:

These characterizations point to the side reactions involving NH3 oxidation competing with the basic SCR reaction. The magnitude of the oxidation reactions can be quantified by calculating the NH3/NOx ratio based on the measured NOx reduction that is actually occurring, along with the measured NH3 slip:

To illustrate these oxidation reactions, the data in Fig 1 are replotted in Fig 2 using the NH3/NOx-eff ratio, as calculated from Eq 2, as the x-axis.

As can be seen in Fig 2, these trends appear more “as expected” for an SCR process:

Not all catalysts exhibit the same degree of ammonia oxidation. An easy way to compare catalysts is to compare the relationship between the injected NH3/NOx ratio and the NH3/NOx-eff calculated from Eq 2. This comparison is shown in Fig 3 for Catalyst A and a second catalyst, Catalyst B, tested under similar conditions. Using a linear curve fit through the data shown in Fig 3 indicates that for Catalyst A, 48% of the injected ammonia at NH3/NOx = 3 is oxidized and does not participate in the SCR reactions. 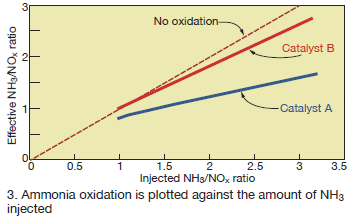 For Catalyst B, the ammonia oxidation is less than 12% at NH3/NOx = 3. Also, the amount of oxidation increases as the amount of ammonia injected increases: At NH3/NOx-eff of 1.0, Catalyst A and B oxidize 20% and 0%, respectively.

Table 1 compares the activity K measured for Catalysts A and B if the measurements are done at either an inlet NH3/NOx ratio of 1.2 according to the testing guidelines, or at the effective NH3/NOx ratio defined in Eq 2. Note that Catalyst B exhibits little oxidation: There is little difference in the measured activity (76 versus 76.5 m/hr). However, for Catalyst A, which exhibits a higher level of ammonia oxidation, there is a large difference in the activities (38 versus 48 m/hr). 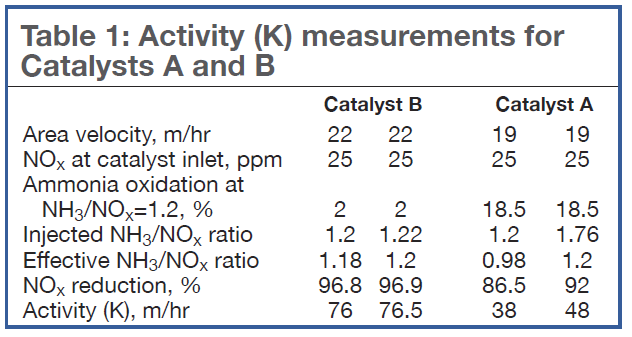 If the activity measurements shown in Table 1 are to be used to make performance predictions, there will be a large difference in these predictions for Catalyst A. Fig 4 shows the predicted performance for Catalyst A operating at an area velocity of 19 m/hr and inlet NOx of 25 ppm with a velocity and NH3/NOx maldistribution of 15% RMS and 10% RMS, respectively. 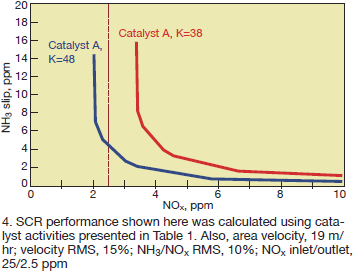 Even if the catalyst activity measurements are being made to track relative activity (K/Ko) where the catalyst vendor has specified a K/Ko value at the “end-of-life,” there can be issues. If the amount of ammonia oxidation changes as the catalyst ages, then the K/K0 parameter based on an activity measured using an inlet NH3/NOx ratio of 1.2 may also be in error. 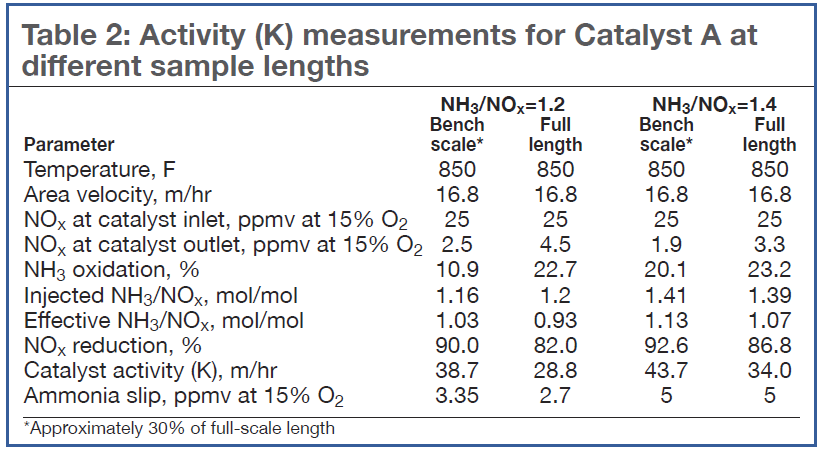 Therefore, if catalyst performance is to be validated by lab testing at reduced scale, particular attention should be given to the amount of ammonia oxidation observed at that scale. If the amount of ammonia oxidation is large, a performance test at full-scale catalyst length is recommended to capture a representative activity under field conditions.

Recommendations. For SCR catalysts operating at temperatures of 800F to 850F, oxidation of a portion of the injected ammonia must be addressed when characterizing catalyst performance in the laboratory. The current testing guidelines for gas turbine SCR catalysts are silent in terms of these parallel oxidation reactions at such high temperatures.

When laboratory catalyst tests are conducted, measure ammonia slip along with the inlet and outlet NOx measurements. This will allow calculation of the effective NH3/NOx ratio (Eq 2), resulting in a more accurate determination of the actual catalyst activity as well as quantifying what fraction of the injected ammonia is oxidized and does not participate in the SCR NOx reduction process.

As mentioned earlier, the gas-turbine SCR testing guidelines also describe a test where catalyst performance is tracked over time by measuring the NOx reduction that can be achieved at the NH3 slip limit with laboratory operating parameters matching full-scale operating parameters.  While this procedure is not directly influenced by ammonia oxidation, it would be good if along with the NOx reduction achievable at the NH3 slip limit, the test results also include the inlet NH3/NOx ratio needed to yield the NH3 slip limit. This would allow changes in ammonia oxidation to be monitored as the catalyst ages. 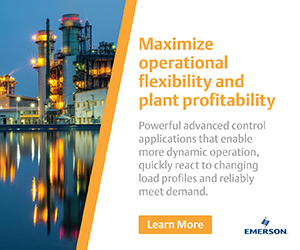